Another loss but Longford Town the victims of harsh refereeing 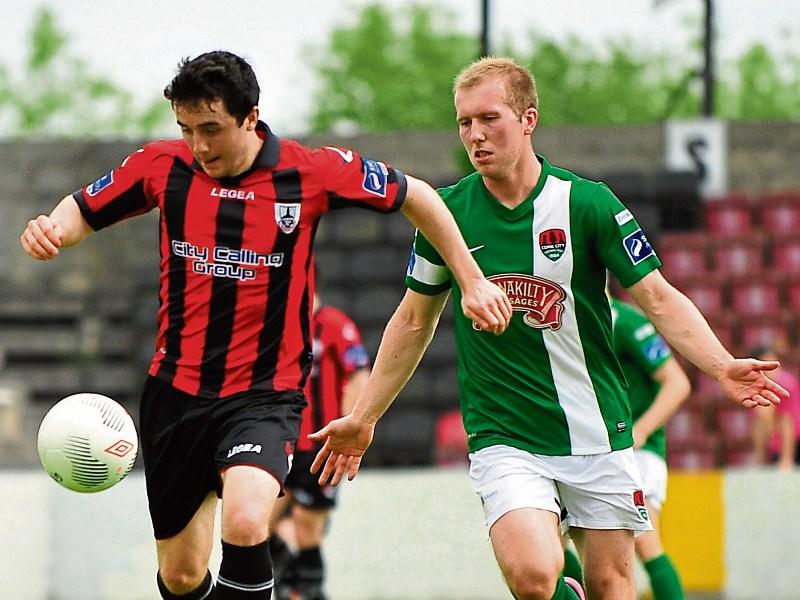 While league title contenders Cork City gradually gained control with three second half goals to win with considerable ease in the finish, Longford Town were the victims yet again of some harsh refereeing in the Premier Division clash at City Calling Stadium on Sunday last.

After keeping it very tight at the back in operating a defensive gameplan that was proving to be very frustrating for the visitors, the game changed once inexperienced youngster Tristan Noack Hofmann was sent-off after receiving a second yellow card in the 34th minute for what appeared to be a fair tussle for the ball with Cork opponent Steven Beattie who tumbled over in the 50/50 tackle.

It was a controversial call by Dublin referee Derek Tomney, who had already booked Tristan in the early stages of the game, and there was further cause for the home supporters to vent their fury at the match official who completely ignored a deliberate handball by City substitute Mark O’Sullivan in the Town box with a couple of minutes gone on the changeover.

A clear-cut yellow card offence committed by the eventual Cork matchwinner went unpunished and throughout the current season Longford Town have suffered from several unfair decisions made by the referees, a factor in the fierce struggle and making it even harder in the battle to avoid relegation.

Rooted at the bottom of the table on the same seven points as Bray Wanderers, the sides clash in a massive match at the Carlisle grounds this Friday night and manager Tony Cousins will be hoping that key figure Kevin O’Connor recovers from the injury that ruled him out of the Cork encounter.

Despite the latest setback on Sunday, watched by the poor official attendance of just 450 in perfect weather conditions, it must be said that the players worked very hard and particularly so when they were reduced to ten men.

In fact, the Town went close to scoring as early as the second minute when a Lee Duffy strike flashed just over the bar while the best chance for the Munster club in the first half fell to defender Alan Bennett but his clear-cut close range header was off target in the 23rd minute.

Later on Longford defenders Mark Rossiter and Pat Flynn came to the rescue when blocking goalbound shots from Bennett and Stephen Dooley as the sides remained scoreless at half-time but the deadlock was eventually broken in the 57th minute.

Sean Maguire directed a delightful shot into the back of the net, after capitalising on slack defending, and Town keeper Paul Skinner then produced three great saves to deny Mark O’Sullivan (twice) and Maguire before Cork scored a second goal in the 73rd minute to put the issue beyond all doubt.

O’Sullivan was a constant threat after he was brought on and the physically strong striker found the back of the net with a near post header after connecting with a Kevin O’Connor free-kick.

There was some good news for Longford Town when Rhys Gorman was introduced in the 75th minute to make his first appearance this season after a lengthy injury absence.

Moments later the home side created a decent chance but another substitute Josh O’Hanlon made poor contact with a weak header in front of the posts.

Things got worse for the Town when Cork grabbed a third goal in the 83rd minute. The completely unmarked Stephen Dooley finished the perfect pass from Sean Maguire into the corner of the net and it took another cracking save from the excellent Skinner to keep out a shot from Maguire in the 86th minute.