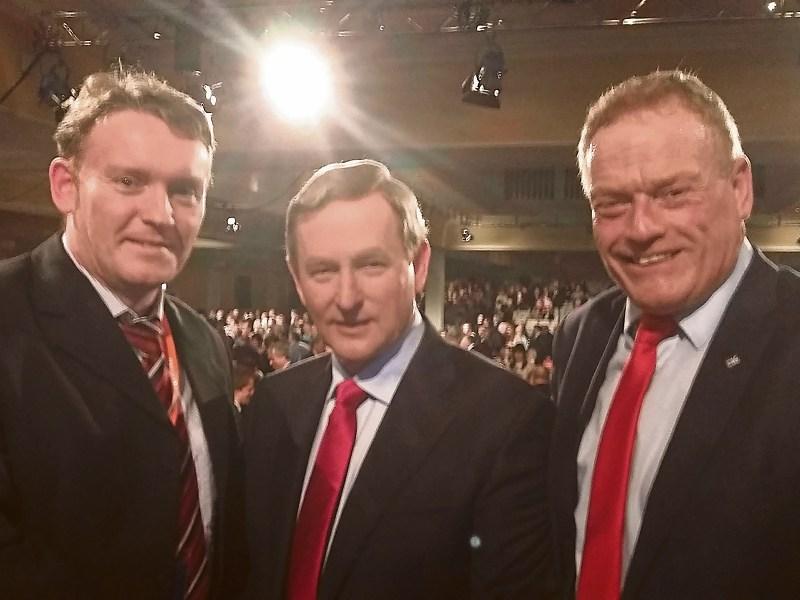 Talks between Fine Gael bosses and its local organisation in Longford are to take place this week after the county was left out of Taoiseach Enda Kenny's 11 nominees to the Seanad.

Fine Gael Cllrs Micheál Carrigy and Colm Murray were both widely touted as being among the frontrunners to get the nod after the county was left without a TD for the first time in its history after February’s general election.

Details over that decision were announced last Friday when Mr Kenny opted for six former Fine Gael TDs instead, two of which included former ministers James Reilly and Paudie Coffey.

Local party strategists, however, had been made aware of the likely outcome several days earlier via a text message Mr Kenny sent to an unnamed county councillor.

The contents of that message,, which was relayed to the Leader and first revealed last Thursday on its website longfordleader.ie, appeared to illustrate the rationale behind Mr Kenny's decision.

“Longford chose not to elect any TD,” read part of the text message.

“I’m being asked to decide on one councillor over another.”

It is believed that An Taoiseach feared a backlash from the local party if he elevated one of those candidates.

Both Cllr Carrigy and Cllr Murray are already being talked about as possible candidates whenever the next general election is held.

“(I) don’t think it’s fair to choose between two up and coming FG councillors in Longford,”Mr Kenny’s text read.

Cllr Murray said while he did not want to comment specifically on the nature of the text message from Mr Kenny, he said he had accepted the decision.

“I can see where he is coming from,” he said, while stopping short of saying the county had been let down.

“But I do feel somebody, be that Micheal Carrigy, myself, or someone else, that someone should have been appointed from Longford.

“We (Longford) are in a different situation to every other county in that we don’t have a national representative (in Leinster House) for the first time ever and certainly I feel that somebody should have been appointed (to the Seanad) from Longford.”

The Leader has previously reported on how Cllr Murray and Cllr Carrigy had made it known to Fine Gael chiefs of their interest in securing one of the Taoiseach’s 11 Seanad nominations.

For his part, Cllr Murray said he informed the party that should his candidacy be overlooked, he intended to “knuckle down and plough on” in his role as a county councillor.

The Kenagh based representative added the party at local level had resigned themselves to what was to be played out in Mr Kenny’s text message for the past week.

As such, Cllr Murray said tentative talks had already been held with his seven other Fine Gael county councillors about how best to represent the county going forward.

“We have had informal discussions within the group to see how best we can represent Longford as a council group in order to make sure our voice is heard,” he added.

“I won’t say what those steps are, but we are taking steps.”

They too were tendancies Cllr Murray's apparent rival for a Seanad nomination was keen to testify to.

“I will be meeting party headquarters to put in place a plan for the party (locally) going forward,” said Cllr Carrigy.

That said, the Longford Fine Gael group leader struggled to hide his frustration when pressed.

“It was my feeling and the feeling of members in Longford that we should have had top priority given the circumstances (no TD) we were in and I honestly thought that would be followed through on.”

Cllr Carrigy admitted he has since passed on those feelings to party bosses, but said the onus was now on ensuring voters get the best possible return from their locally elected representatives.

Meanwhile, colleagues of both the Ballinalee postmaster and Cllr Murray have said they were not surprised by Mr Kenny's decision.

“I knew well we (Longford) wouldn't get it. It was never on the cards in the first place,” said a nonplussed Cllr John Browne.

The Longf0rd publican, together with Cllr Peggy Nolan had been mooted as possible alternatives in an attempt to elevate the credentials of either Cllrs Carrigy or Murray ahead of the next general election.

Not according to Cllr Browne however, who also rejected assertions that last Friday's announcement could fracture the party going forward.

“Tipperary have got no Fine Gael representation either,” he replied.

“Their two TDs failed to get elected.

“This will make no difference at all. In this business (politics) everyone bulls their own cows. You have to just buck your own goats and get on with it.”

One change Cllr Browne said the party at local level would be seeking however, prior to the next election is an “earlier” selection convention