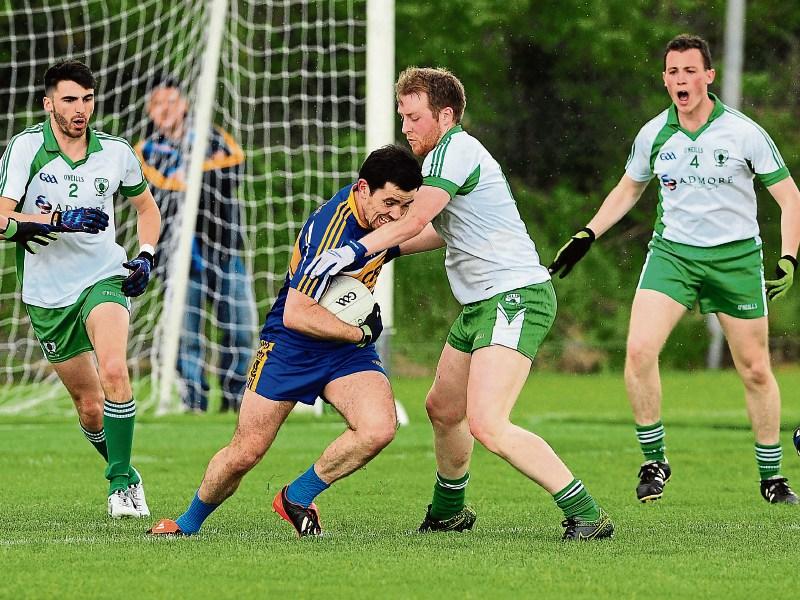 Although they were missing a few regulars, Killoe were still too strong for Dromard with the wide margin of eleven points separating the sides at the end of the Division 1 league game at Emmet Park on Sunday last.

On level terms at the break, 0-9 to 1-6, the county champions gradually turned on the power with the advantage of the wind in the second half and from the moment Denis McGoldrick got the Emmet Og goal in the 42nd minute the outcome was never in any doubt

McGoldrick shot to the net, after he was put clean through by impressive midfielder Paddy Kiernan, to leave Killoe in a comfortable 1-12 to 1-8 lead and whatever hopes Dromard had of staying in touch were dashed when their key forward Francis McGee was dismissed in the 45th minute after receiving a black card.

From there until the finish it was generally one-way traffic with Emmet Og adding another nine points to their most emphatic tally - three from their chief marksman Denis McGoldrick who clocked up a total of 1-6 (three frees) in playing a leading role in the victory.

Mark Hughes (firing over his fourth point), centre-half-back Padraig McCormack, Eugene Clarke, Michael Quinn (2) and Larry Moran were also on target for Killoe in the final quarter of the contest while Jamsie Martin fired over a couple of consolation scores (free and play) for Dromard who have re-appointed Sean Hagan as their manager following the departure of Mark Heslin (Gortletteragh).

It was a lot tighter in the first half and at one stage the visitors led by 1-4 to 0-3 with the goal coming from a penalty converted by Francis McGee in the 9th minute. Three of the points were registered by McGee (one free) while Peter Reynolds landed the opening score of the game in the 2nd minute.

Sean McCormack was unlucky not to find the net for Killoe after hitting the post with 12 minutes gone in the first half. In this same attack Denis McGoldrick got their first score and another point quickly followed from Mark Hughes.

The home side were slow to settle but gradually closed the gap and when Paddy Kiernan landed a terrific point in the third minute of stoppage time they held a slender 0-9 to 1-5 lead with the other scores coming from Kiernan, Michael Quinn, Mark Hughes (2), Denis McGoldrick (free) and Padraig McCormack (an excellent effort).

Cian Mimnagh (a great strike) and Jamsie Martin (converting a free in the fifth minute of stoppage time) were also on the scoresheet for Dromard, who fell behind in the early stages of the second half after Sean McCormack and McGoldrick fired over frees for Emmet Og. Dromard full-forward Peter Mimnagh landed a good point in the 37th minute and a score apiece were then exchanged between Paddy Kiernan and Bernard Sheridan before Killoe struck the killer blow with the goal from Denis McGoldrick.

On the stroke of the full-time whistle resolute Killoe defender Padraig McCormack received a black card but that mattered little to manager Declan Rowley who will be pleased with the overall performance in the absence of injured players Paddy Thompson, Simon Kiernan, Daniel Keogh, Daniel Mimnagh and Shane Dowd.

Subs:- Jamie King for S McCormack; David Kiernan for R Moffett and Gary Connell for E Toher (all in the 57th minute).