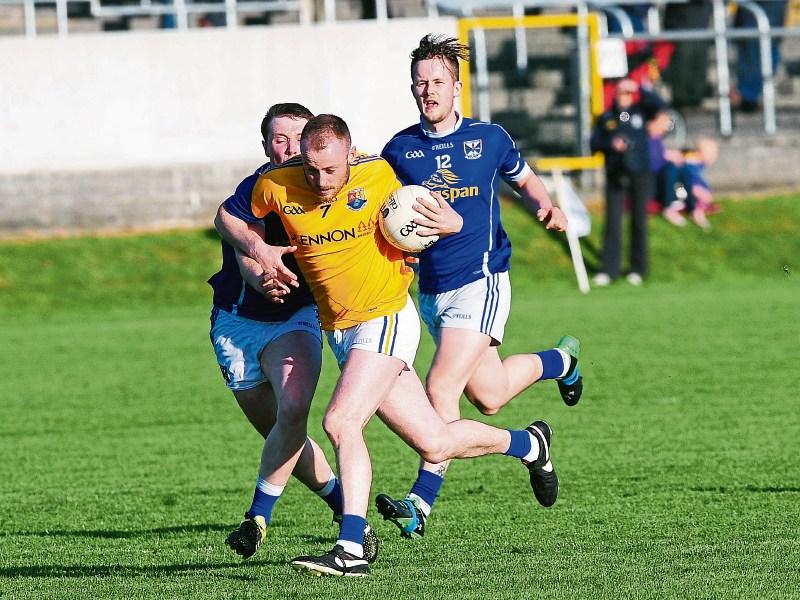 Hopes of some Leinster success for Longford this year are still alive after the junior footballers came back from the dead to conquer neighbouring rivals Cavan in the first round clash at Glennon Brothers Pearse Park on Wednesday evening last.

The home supporters among the sparse attendance of around 150 watched their side stage a remarkable recovery in the exciting second half, coming from ten points down (1-12 to 0-5) to take the lead after enjoying a glorious dominant spell that yielded the impressive total of 2-6 without reply between the 38th and 50th minutes.

Trailing by 0-9 to 0-5 at the break, Longford conceded three more points in the early stages of the second half (Jonathan McCabe, Ryan Connolly free and Caoimhin O'Reilly) and it looked all over as a contest when Barry Doyle fired home a cracking goal for Cavan in the 37th minute.

But moments later Frank McNamee’s side were thrown a lifeline with a goal from Ballinalee native Enda (playing his club football with St Judes in Dublin) and three points followed from Dalton, Aidan McElligott and Seamus Hannon before Vinny Hourican (who was just brought on) got the vital touch to finish the ball to the net.

With the advantage of the wind, the force was firmly with Longford and after David McGivney converted a free to leave the sides all square in the 46th minute two more points materialised through Rian Brady and Larry Moran - the latter one of five substitutes introduced to change the course of the game.

But Cavan came storming back to regain the lead with three points in a row through Barry Doyle, Enda Henry, Jonathan McCabe before a free fired over by David McGivney put Longford on level terms.

A penalty awarded to Cavan in the 55th minute, with Ryan Connolly stepping up to dispatch the kick to the net, looked to have settled the issue but gutsy Longford were not done for yet and the game took another twist when Aidan McElligott got a flick on the ball to snatch the equalising goal in the 58th minute.

Cavan were rattled and Longford finish the stronger with points from Shane Kenny, David McGivney (free) and Jayson Matthews to clinch a Leinster junior semi-final showdown away to the title holders Wexford on Thursday week, June 2nd, with Kildare taking on Louth in the other last four clash.

Backboned by most of the county U-21 team who lost to Wexford in the opening round of the Leinster Championship this year along with former senior star Shane Mulligan, Longford came up against a restricted Cavan outfit who were not permitted to select any players who featured in the club senior championship last year after winning the All-Ireland junior title in 2014.

In other words, the current Cavan squad in this grade was comprised of intermediate and junior club footballers and just three of those are presently part of the county senior panel.

That ruling should have put Longford in a strong position to make further progress in the Leinster Junior Championship but after missing a couple of clear-cut goal chances in the first half, allied to some strange decisions made by Laois referee Davey Moore that went against them, the home county were unfortunate to end up 0-9 to 0-5 behind at the break.

When the visitors made a flying start to the second half in adding another 1-3 to their tally, there appeared to be no way back for Longford but they proceeded to enjoy a new lease of life in outscoring Cavan 3-10 to 1-3 during the remainder of this bizarre encounter that was high on entertainment value.