Reynolds remains at the heart of Longford 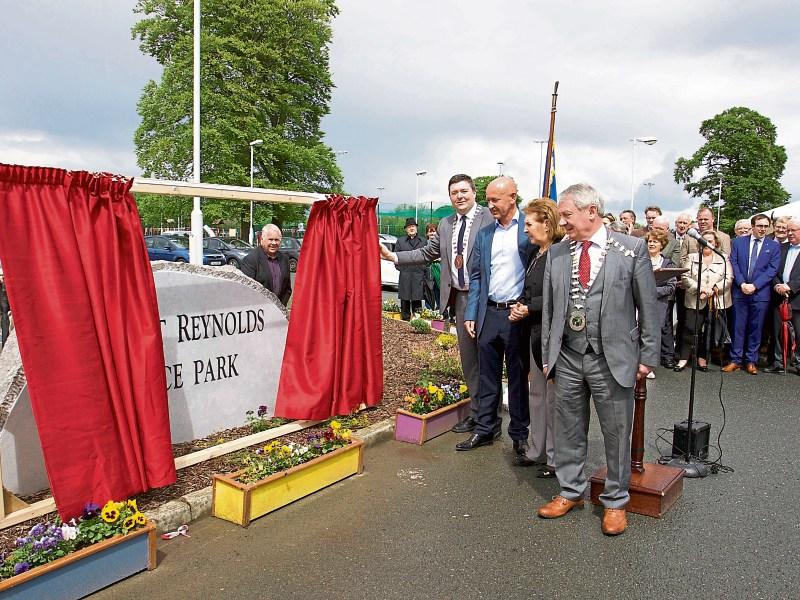 Despite the regular, heavy showers of rain that fell on Sunday, the Mall in Longford town was busier than usual, as the family, friends, and supporters of the late Albert Reynolds gathered to rename the space 'Albert Reynolds Peace Park'.

A tribute to one of Longford's most famous sons, the turnout on the day showed the esteem in which the former Taoiseach is still held following his passing in August 2014.

Opening the event, Cathaoirleach of Longford Co Council, Cllr Gerry Warnock admitted that it was an honour for him to officiate.

“I never had the privilege to work at close quarters with Albert but I didn't need first hand knowledge because the respect and the esteem which Albert Reynolds was held in by the people of Longford and indeed by the people of Ireland for his commitment to his country is second to none,” Cllr Warnock stated.

Revealing that he had proposed the tribute, Cllr Seamus Butler, Cathaoirleach of Longford Municipal District, pointed out that Fine Gael Cllr Micheál Carrigy had proposed the name, another nod to the respect earned by the late Longford man throughout the political community.

Referring to the former Statesman as the “original architect” of the peace process in Northern Ireland, Cllr Butler paid tribute in particular to Albert Reynolds' local contributions.

“He was part of the Longford Development Company that delivered the first indoor heated swimming pool outside of the cities in Ireland in the late sixties,” Cllr Butler explained, revealing that Mr Reynolds had been a member of the Mall Development company and had been instrumental in acquiring the land.

After encouraging locals to adopt Reynolds' 'get up and go' attitude, Cllr Butler then directly addressed the Reynolds family, saying; “I know Kathleen and the family must feel their loss every day and I hope that it may be some comfort here today that we have a permanent and lasting memorial, the Albert Reynolds Peace Park.”

Speaking on behalf of his family, Philip Reynolds, son of the late Albert, said it was a ‘great privilege and a great honour’ to attend the occasion.

Indeed, he told the Leader that his father would have been thrilled to be “stuck in the middle” of such a beautiful, lively place in the heart of Longford.

He also thanked Cllr Butler for sharing the information on Longford Swimming Pool, which he had tried to research prior to the weekend.

Addressing the crowd gathered, the local businessman described the tribute as ‘truly remarkable’.

“For us and for our generation I’m sure this will always be the Mall. For future generations - who knows? Maybe they’ll call it Albert’s Park, you wouldn’t know.

“But the lovely part about it is that it’ll be here for future generations and some people will cross that bridge and wonder ‘who was Albert Reynolds’ and in the same way I tried to Google about Longford Swimming Pool, maybe they’ll Google and find out who Albert Reynolds was.”

“So thank you very much to everybody in Longford.”