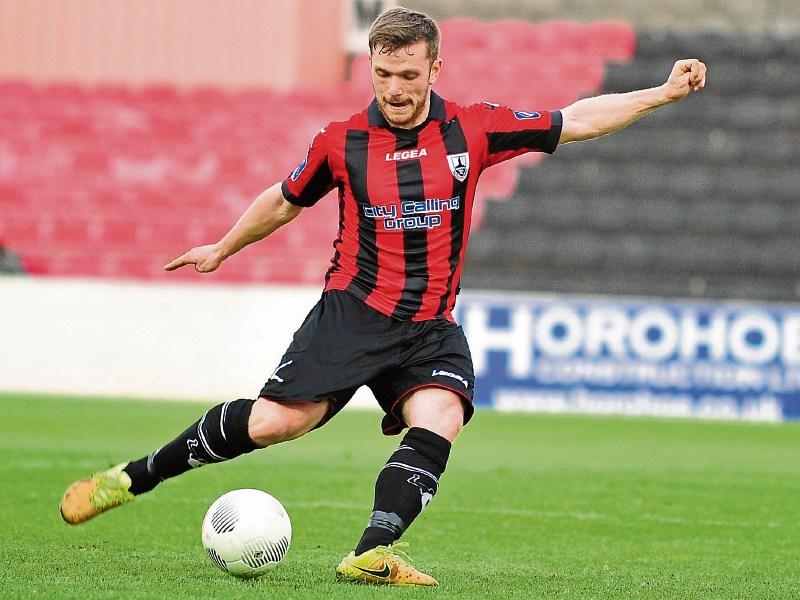 Showing remarkable resolve in the aftermath of the terrible home defeat against Wexford Youths a few days earlier, Longford Town made amends in producing a much improved performance in the exciting draw against St Patrick’s Athletic at Richmond Park on Friday night last which was televised live on Setanta Sports.

But just like previous games, the Town’s defensive frailties were exposed as they threw away the lead three times in almost scoring a famous win with all six goals coming in a thrilling second half that provided great entertainment value.

Former St Pat’s player Philip Gannon broke the deadlock just after the break; captain Conor Powell got the Town’s second goal while David O’Sullivan scored the third from the penalty spot with time running out and in this same incident Pat’s defender Darren Dennehy was sent-off for a second yellow card.

Down to ten men, that looked to be the end for home side but they rallied to snatch the equaliser in the 89th minute when Jamie McGrath found the back of the net. St Pat’s had a great chance to score a dramatic last gasp winner but a poor close range attempt by Sam Verdon saw him shoot tamely at young Town keeper Ian Molloy.

Longford manager Tony Cousins made four changes from the team that lined-out against Wexford Youths with Jamie Mulhall, Lee Duffy, Kaleem Simon and Mark Rossiter all coming in to start against St Pat’s.

The Town had the ball in the net in the 12th minute but Lee Duffy’s strike from Kaleem Simon’s pass was disallowed for offside. St Pat’s began to come into the game and in the 19th minute Ger O’Brien’s shot was deflected out for a corner by Tristan Noack Hofmann. From the resulting corner Mark Timlin should have done better and minutes later Jamie Mulhall was forced into conceding a corner as Pat’s continued to press.

Kaleem Simon then had a chance for the Town but Ian Bermingham defended well while in the 37th minute McGrath came close for Pat’s. As half-time approached Town created chances through Mulhall and Simon but it remained scoreless. Just before the break St Pat’s striker Jamie McGrath nearly capitalised on a mistake by Ian Molloy but the Town keeper redeemed himself by making a save.

The second half had just started when the Town took the lead through Philip Gannon. But three minutes later St Pat’s levelled when Sam Verdon directed a powerful header into the net after connecting with Billy Dennehy’s corner.

In the 61st minute Conor Powell did well to get to the ball ahead of Timlin as the home side went in search of a second goal but it was Longford who regained the lead in the 63rd minute. The excellent Kevin O’Connor (Setanta Sports Man of the Match) broke through and the ball fell to Powell who made no mistake in shooting to the net.

But the Inchicore outfit got back on level terms in the 73rd minute when substitute Conan Byrne, only on the pitch a short while, made an immediate impact when he shot low past Ian Molloy who had drifted off his line in a vain attempt to clear the danger.

The momentum was now with St Pat’s and it took some good defending to clear McGrath’s shot off the line after he was played in by Byrne and minutes later Sam Verdon had a chance as the home side continued to pile on the pressure.

But resolute Longford Town stood firm and looked to have won the match when David O’Sullivan converted a penalty at the second attempt in the 87th minute. O’Sullivan’s initial attempt struck the crossbar but referee Rob Harvey ordered the spot kick to be re-taken as Darren Dennehy (sent-off for a second yellow card in the penalty incident) was still making his way off the pitch.

But the drama was not over yet as Longford Town unfortunately let a vital victory slip from their grasp when Jamie McGrath pounced to score St Pat’s third goal in the 89th minute to earn his side a rather fortunate draw in the finish.

Nevertheless, it was a very good result for Longford Town who will now take a break from the hectic league campaign and concentrate instead on the tricky FAI Cup second round clash away to First Division opponents

Waterford United at the RSC this Friday night.