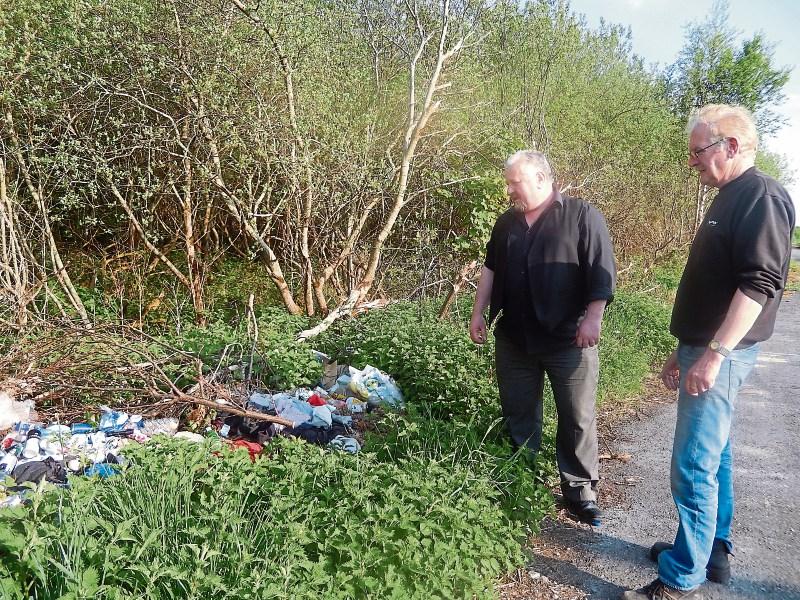 The escalation of illegal dumping on the approach routes and walkways around the historic Corlea Trackway Visitor Centre in south Longford is turning the popular tourist destination into a horrible eyesore.

The centre, outside the village of Kenagh, attracts 5,000 visitors annually and Tour Guide for the past sixteen years, Noel Carberry, explained, “the dumping is as bad now as it ever was.”

He believes there is only one solution to tackle the problem. “It is very deliberate what is happening and I think the only way to solve it, is to erect CCTV cameras, catch a few people, prosecute them, make them go out and clean it up, and hope that this might serve as a deterrent.”

Just last week, the visitor book at the Centre, included signatures of German, Austrian and Canadian tourists, and Noel indicated that the visitors even commented on the dumping.

“They were constantly talking about it,” Noel pointed out. “Rubbish is strewn along the approach roads. They said it was ‘shocking’. They also expressed disbelief over how roadside trees had been cut.”

“People from various nationalities love the place. They come here to enjoy the trackway, bog and flora but what message are we sending out? The dumping is terrible,” said Noel.

Along with his colleague Joe Mullooly, Noel outlined that one time they cleared the rubbish themselves and that they ‘filled ten rubble sacks’.

Joe said things were bad enough with stuff being thrown out of passing cars but that it hit an all time low in recent weeks as Longford County Council officials and a veterinary surgeon had to come to remove two dead donkeys and a dead horse.

“It was horrific and a health hazard,” said Joe. He also pointed out that the cover strips off copper pipes were to be found quite frequently in the vicinity of the centre.

Corlea Trackway Visitor Centre is run by OPW (Office of Public Works), while the County Council is responsible for the upkeep of the roadways leading to the centre.

“Somebody, has to, at this stage grasp the problem and attempt to put a stop to it,” opined Noel.

Both men also believe that with more advertising and promotion it is possible to increase annual visitor numbers to the centre which they describe as ‘a hidden gem’.