Coming to Backstage Theatre on May 20 and 21 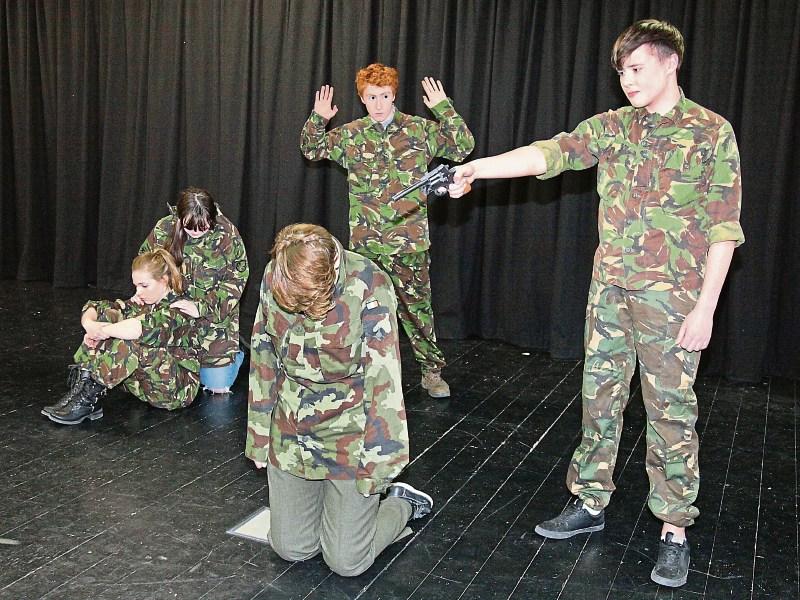 It’s their third full length production in less than a year, but Backstage Youth Theatre’s enthusiasm has not waned as they prepare to take their 1916 commemoration to the stage.

Presented by BYT and Backstage Theatre Canal Studio Productions, in association with Longford Ireland 2016, ‘2016 - A Coming of Age marks the joint 21st birthdays of BYT and the Backstage Theatre. It was devised by the BYT members and written and directed by Brendan Williams.

Despite a busy year, Chairperson of BYT Paul Higgins paid tribute to Brendan and the talented teenagers who will bring this story to life next week.

“Needless to say, I’m delighted we’re doing it and it’s great to have the members devise it themselves,” he stated.

Giving a bit of background into the story, BYT member Adam Callan, who will play the roles of ‘Campaigner’ and Sean, explained; “It’s set in a sort of fictional Ireland, where a new law has come to pass.” This law, he revealed, ensures that only people born in Ireland are entitled to be Irish citizens.

“A group of people, who call themselves ‘The Right Fight’, take over Longford Court House in protest.

“While that is going on, there’s also flashbacks to 1916 itself, including Padraig Pearse reading the Proclamation.”

Molly McBride is another BYT member who will take to the stage for the first time with the group next week, portraying protestor Dee.

Describing her character as stroppy, and revealing that she’s likely to walk out if things aren’t going her way, Molly laughed; “Some people say I’m a lot like her - I don’t know whether to be offended or not!”

Outlining the writing workshops that were held to devise the scripts, Molly added; “We threw around ideas and wrote bits and bobs and Brendan strung it all together.

Stating that she is ‘honoured’ to have secured a role in the show, Molly revealed what she has learned from the process; “I’ve learned to work with other people and take directions.”

He also revealed that while the writing workshops and rehearsals have been fun, “it’s great to challenge ourselves with something different”.

“I hope people enjoy it as much as we did working on it,” he concluded, while Molly agreed; “I hope they’re entertained. It’s a drama, it’s kind of serious and I just hope that people will enjoy it as we have put a lot of effort into it.”

Referring to the production's centenary connections, Molly pointed out that there is a lot of ‘traditional’ content in the play and she concluded; “I hope we do it justice!”