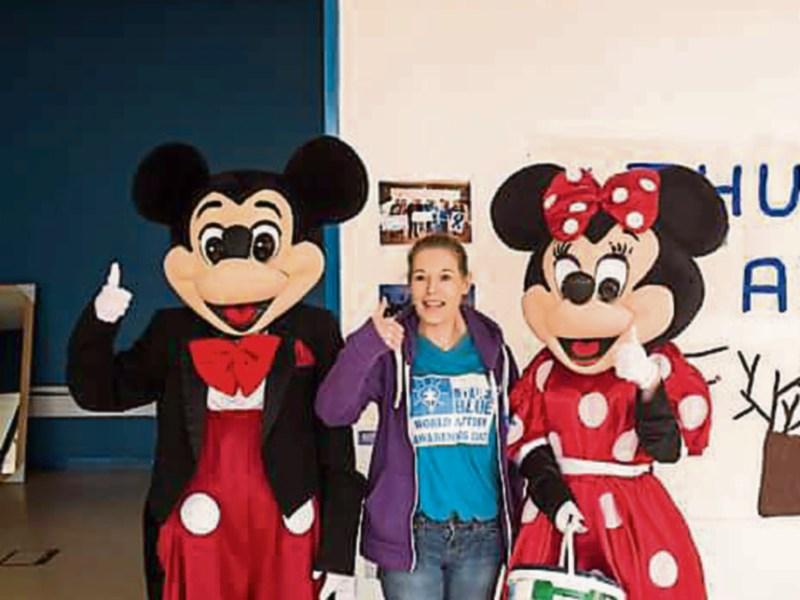 This is the work of mother-of-two Ann O’Leary, who has been working tirelessly over the last number of years to raise awareness of Autism, something which is very close to her heart.

“I have a boy with Autism,” she explained, “Ben, he’s nine years old and he goes to St Christopher’s.

“I do a few things around the town for Autism.”

Since 2015, Ann has organised what has proven to be a fun and educational day for all ages to mark Autism Awareness Day.

With the town council offices being lit up with blue lights, local businesses also got on board; dressing their windows with blue items and hanging blue balloons outside shop fronts, while others donated raffle prizes to raise funds for the Autism Unit at St Christopher’s.

The addition of Mickey and Minnie Mouse, thanks to Fun for You Entertainment, as well as a bucket collection, ensured that this year’s events, raised €1,300 for the unit.

“It’s just to say thanks to St Christopher’s for doing such wonderful work with my little man,” she smiled.

Thanking all local businesses for their support, as well as Cathaoirleach of Longford Co Council, Cllr Gerry Warnock, Ann also paid tribute to the Gardaí for approving the licence for the bucket collection as well as QPP printing who printed special t-shirts for the day.

Adding a thanks to the local photographers who attended and helped capture the fun of the day, Ann also acknowledged the continuous generosity of the people in Longford.

“The people in Longford town, no matter how much we struggle, always support us,” she affirmed.

For next year, Ann’s aim is to see a bluer Longford and to raise further awareness of Autism in the town, but for a long-term project, she has set herself a higher goal.

“I’m trying to open up a sensory room,” she revealed, “where people can come and book the room out.”

This, she hopes, would help children and adults with Autism or disabilities not to feel “left behind” when it comes to the likes of homework or youth clubs and social groups.

Revealing that she has half a proposal already completed for the room, she added that she will seek help in finishing it, as well as in finding a suitable space and the necessary funding.

“Eventually, I’d love to turn it into a youth club for all, that’s the long-term goal,” she added.

Of course, Ann is welcoming any help in her project and has invited those interested in getting involved to get in touch by sending an email to annoleary@ymail.com or by calling her on 086 0898489.