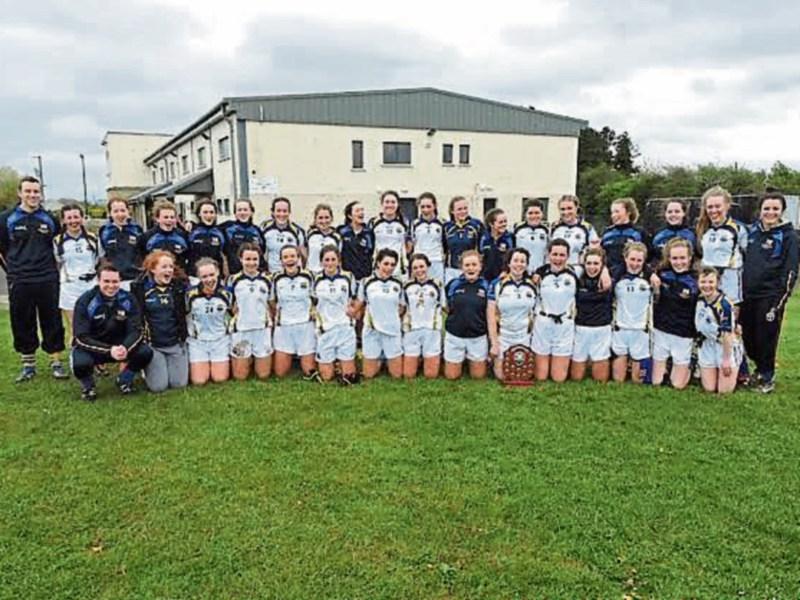 The Longford Minor Ladies captured the Leinster C Shield title on Sunday 1st May when they overcame Louth in the final which was played at the Moorefield grounds in Newbridge.

Having lost out to Louth earlier in the competition by the narrow margin of just one point, the Longford girls knew they would have a battle on their hands in their quest for silverware but a superb performance from the girls helped them to a resounding win over the ‘wee county’ on a final scoreline of Longford 6-7 Louth 3-4.

It was the girls from Louth who started the game much the stronger and aided by a strong wind, they quickly built up a 1-3 to 0-0 lead. Longford were struggling to get to grips with the pace of the Louth side and were finding it difficult to create any meaningful opportunities against the breeze.

But all that quickly changed when Lauren Burke found the back of the net to open Longford’s account and almost followed up with a second goal from the resulting kick-out only to shoot narrowly wide under severe pressure from the Louth defence.

Longford began to dominate proceedings and a second goal from Lauren Burke, another from the lively Emer Esler and a superb solo effort from Cait Murphy who surged through the defence before firing the ball to the bottom corner of the net helped them build up a 4-1 to 1-4 lead.

Louth looked to have the ideal opportunity to narrow the gap just before the break but Una Mulligan rescued her side with a fantastic save from a penalty and Longford headed for the dressing room with a 6 point lead.

Like they did in the first half, Louth started the second half strongly and within minutes had found the back of the net twice to leave the sides level. That was the closest they got however as Longford soon reasserted their superiority on proceedings and scored 2-6 without reply.

Points from Lauren Burke, the O’Brien sisters Aoife and Eimear, dominant midfielder Aisling McCormack and centre-half-forward Ciara Healy added to the Longford tally and a third goal from Lauren Burke, who was causing serious trouble for the Louth full-back-line, put an end to any hopes of a Louth comeback.

Longford’s final goal came from player of the match Ciara Healy who was a constant threat throughout the game and injected great pace and movement into the attack. Overall this was an extremely polished performance from the Longford side who emerged victorious by the wide margin of 12 points.

Captain Ellen Byrne from the Carrickedmond club accepted the Leinster C Shield on behalf of her teammates after the final whistle. Ciara Healy from the Rathcline club was presented with the player of the match award.