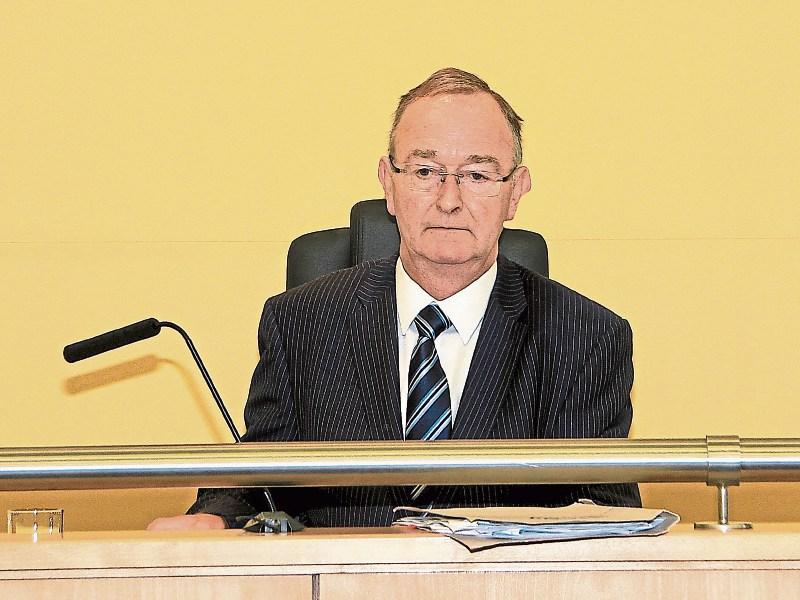 A man who appeared at last week’s sitting of Longford District Court charged under the Criminal Damage Act was ordered to pay the costs of the damage or face jail.

In her direct evidence to the court, Garda Tara Ward said that on the date in question she was on mobile patrol in Longford town at 3:20am when she received a call to attend an incident at 29 Ardnacassa, Longford.

The Garda said that when she arrived at the house, all the windows and doors had been smashed in.

The owners - Christy and Bernie McDonnell - then spoke with Garda Ward, the court was told.

“They said they had been woken from their sleep by the windows being smashed in,” continued the Garda.

“In the master bedroom there was a baby in a cot; there was a lot of glass all over the place in that room because the window had fallen in; thankfully the baby was unharmed.”

The court went on to hear that both Mr and Mrs McDonnell told Garda Ward that they had seen the defendant in the garden of their house that night and that the two McDonnell men were in fact brothers.

The Garda added, “Willie McDonnell was arrested in connection with the matter and questioned; he made no admissions and said he was out of the county on the night the incident took place”.

The court was told that the defendant failed to provide an alibi for the night, so the Garda was not in a position to investigate that matter any further.

Gardaí also said that €1,230 worth of damage had been caused to Mr and Mrs McDonnell’s home on the night of the incident and the couple had paid for the repairs themselves.

In his direct evidence to the court Christy McDonnell said that he woke up to the sound of glass breaking on the night and it was approximately 3:30am.

Mr McDonnell also pointed out that he ran to the window and as he looked out he saw three men standing in the driveway of the house at the front pillars.

“I saw Willie’s car and his son Ciarán and as I pulled the curtain back I saw the three of them get into the car and drive off,” he added.

“The very same thing happened on Christmas night - a week earlier - all the windows were broken in the house that night as well.”

Bernie McDonnell then took to the stand.

She said that on the night of the incident she too was awoken from her sleep and immediately went to the window of the bedroom, which she added, “was smashed in”.

She also indicated that while she didn’t see the defendant on the night, neither he nor her husband had spoken for some time.

“I honestly didn’t see Willie when I looked through the window, but this is the second time this has happened to my home,” she said.

Inspector Ollie Baker, during cross examination, then asked Ms McDonnell why she had said in her statement to the Gardaí that she had seen Willie McDonnell that night and that she saw him throwing a rock at her house.

“I was very stressed out over what had happened at the time,” she replied.

“That is why I said those things.”

When Judge Hughes asked her to explain what was going on between the two families, she said she did not know.

“All I do know is that before the incident at Christmas, we never spoke to one another - so there was no problems; we just didn’t speak and that was it,” Ms McDonnell added.

“The brothers hadn’t spoken for about six months before that and I don’t know why, but that was just the way it was.”

When the defendant was called to give his evidence he said he had received a call earlier that night from his sister to say that his two sons were in the Ardnacassa estate and were “up to no good”.

“She said they had rocks in their hands and were going to break up Christy’s house,” continued Mr McDonnell.

“So I went there to collect them.”

The defendant then told the court that he would never dream of breaking the windows in his brother’s house.

“I wasn’t even out of the county that night - I was with family that night.

“Me and Christy never had a problem in our lives and then last Christmas night we had a disagreement - I shouldn’t drink alcohol to be honest with you.

“We were sitting around a table and things got awkward between us.”

Mr McDonnell went on to say that he did not break the windows on the night in question, but was convinced his two sons had caused the damage.

“I will make sure they pay back the money for the damage,” insisted the defendant who then pointed out that they would need a bit of time to get the money together.

In mitigation, the defendant’s solicitor John Quinn said his client wanted an opportunity to get his two lads to pay back the money in respect of all the damage that was caused.

“He says they can have the money in the next couple of weeks, if the court were of a mind to allow them time to gather it,” continued Mr Quinn.

During his deliberations on the matter, Judge Hughes said that the defendant was not a credible witness.

“If I keep going with you, you will tell another 20 lies,” the Judge fumed at the defendant.

“Willie McDonnell has just wasted the time of this court and I am not going to tolerate much more.

“I want the money paid back to Christy and Bernie McDonnell and that’s the end of it.”

“The two witnesses in this case were most credible and I believe what they have said, which is a lot more than I can say for you Mr McDonnell.

Addressing the Judge, Mr Quinn then added, “You know the family and I agree Christy and Bernie were indeed very credible witnesses”.

The Judge ordered the defendant to hand in €50 per week to Mr Quinn’s office until the total amount of €1,230 was paid back.

“If I so much as hear of any further difficulties between you and your brother there will be very serious consequences for you Willie and I mean it,” said Judge Hughes.

The matter was adjourned until June 21 next to allow the Judge time to monitor the repayments.