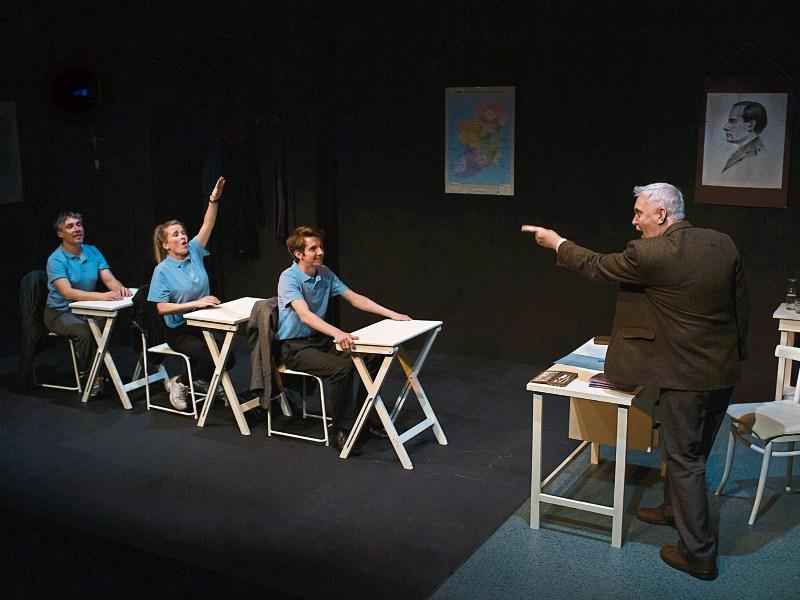 Described as an ‘important play’ by the Sunday Independent, Jack Harte’s ‘Language of the Mute’ comes to the Backstage Theatre on Thursday, May 12.

Having premiered to sold out audiences at the New Theatre, Dublin last year, this compelling play is now set to embark on a nationwide tour, starting with The Riverbank Theatre, Newbridge on May 7.

Though he has written numerous plays, this was the first one to take to the stage, and many audience members have described it as a kind of catharsis, which is important to Jack.

“You take people in,” he said. “You have them for an hour and a half and you have to let them leave with some sort of spiritual experience. Things have to change for them.”

Giving an insight into his play, and the difficult subject matter with which it deals, Jack explained; “This play started from a programme that was on TG4 about a particular case of child abuse”.

The former teacher recalled seeing the documentary, which was made up of two news programmes, on a teacher, poet and pioneer of the Irish language, who had passed away .

“It exposed him as a serial rapist,” Jack stated, before revealing that he had worked alongside the man in question for more than ten years and recognised many of the students.

“That sparked the whole play… I felt like I wanted to deal with this in my own way.

“It’s difficult to understand how somebody can get away with that for a lifetime.

“Once I had it, I felt a fire to get it on. I was no longer knocking politely on doors, I was button-holing people I knew.”

It was, however, a difficult process, personally for Jack, he admitted.

“It was hugely difficult! Even still, I have these kind of spasms when I think of this guy as a former friend, and I think, ‘Jesus, have I done this as a friend?’

“It’s a very complex thing. It’s hugely personal for me but I think that that was good as it put me under the skins of the students - now the men.

“I had a fairly clear head that this was something we had to come to terms with as individuals and as a community.”

‘The Language of the Mute’ sees ex-pupils invade a Dublin classroom to confront their former teacher.

The play explores how charisma can be used for unscrupulous purposes and, as the name suggests, also deals with the inability to communicate and grapple with issues and problems.

“We love language in Ireland,” Jack pointed out. “We use it for anything and everything.

“But when it comes to communicating about something as difficult as this we pull back. We don’t communicate about it, we don’t talk about it.”

Looking forward to the tour, Jack is particularly excited to bring the play to Longford, where he lived for approximately ten years as a child.

“I was born in Sligo, in a place near Easkey. When I was eight or nine years old my father got a job with Bord na Móna in the Mount Dillon works and we lived in the Bord na Móna village in the Green in Lanesboro,” Jack continued, adding that he spent a lot of time on the bogs himself, which was the inspiration for one of his publications, ‘In the Wake of the Bagger’. Though he has been based in Dublin since the age of eighteen, Jack still visits regularly and has family in the area. His family and friends like to visit him, too, and most recently, they organised a bus to attend his play at the New Theatre.

As well as novels and plays, Jack has also written English textbooks and short stories, and throughout his career, his works have always enjoyed a great audience in Ireland and abroad. Many of his works have been translated to languages including Bulgarian, German and Hindi. He was also invited to write a short play for a festival in Greece.

He still enjoys his trips to Longford and, praising both the Backstage Theatre, its Manager Mona Considine and County Librarian Mary Carleton Reynolds for their support, he added; “Obviously, in Longford I’ll be looking forward to friends and neighbours and people like that coming to see it, but it will be an interesting experience to see how people - who don’t know me and who aren’t there to see me - react.”

Presented by Parthalonans Theatre Productions and directed by Liam Halligan, ‘Language of the Mute’ comes to the Backstage Theatre on Thursday, May 12. Show starts at 8pm and tickets, costing €16/€14 are now available from 043 33 47888 or online at www.backstage.ie.