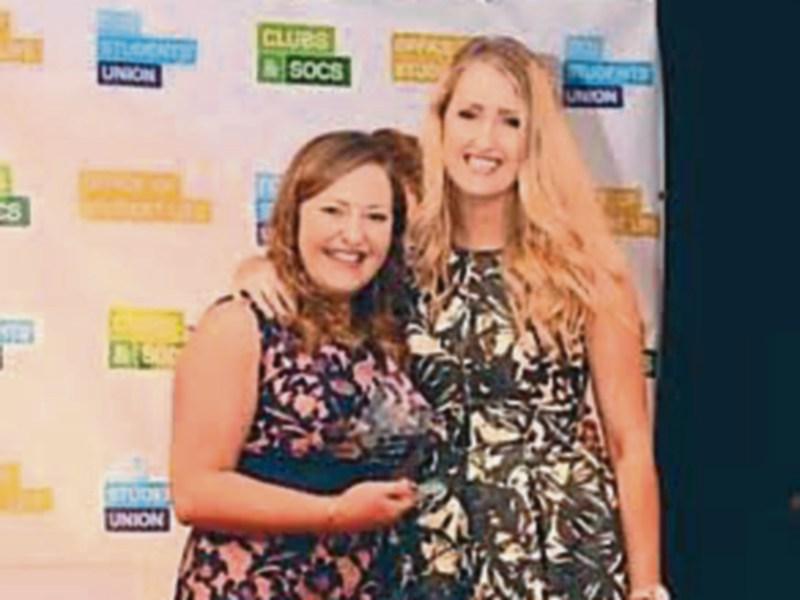 A local nurse has received a prestigious national award for raising awareness of issues facing student nurses and low morale in the sector.

Clíodhna Beirne - a native of Lanesboro - is in her final year of Nursing at Dublin City University (DCU) and earlier this month she was awarded the Student Union Award for her outstanding contribution to the community.

Clíodhna, who is the daughter of Ann and Pat is currently completing an internship at James Connolly Memorial Hospital in Blanchardstown.

The Lanesboro woman established the first ever Nurse Appreciation Day at DCU.

“The Appreciation for Nurses Day came about because I noticed there was low morale among my colleagues,” Clíodhna added.

“Student nurses begin their internships on a starting salary of €6.49 and people were quite down about that.

“Also in hospitals there are such staff shortages now that many of my colleagues began to feel stressed out, so I decided to do something about that.”

Student nurses also carry out 45 weeks of unpaid placement during their training.

The Longford woman made contact with her student union reps - Kim Sweeney and Ivan Hynes - and together they established the appreciation day.

It was a hugely successful event, with funds raised on the day for Temple Street Children’s Hospital.

The college was a hive of activity and Donal Walsh’s mother from the Live Life Foundation delivered the keynote speech at the event.

Clíodhna also spoke about the concerns both she and her colleagues had about the possibility of emigrating with their skills upon completion of their training, because of the lack of suitable positions available in Ireland.

“During training we miss out on a lot of college life as well because we are on placement for some of the time and then back at college for further periods,” the past pupil of Mercy Secondary School, Ballymahon continued.

“Very often we find ourselves not being able to join clubs or societies because of that, so with that in mind I decided to organise a Ball which was also a huge success; it was brilliant.

“Then just before the General Election, it was announced that student nurses would get a pay rise, so that boosted morale a little as well.

“The industry is under so much pressure now because of bed shortages and staff cuts, so it’s admirable to see how well nurses cope every day under those pressures.”

As for Clíodhna, her future remains bright.

She has embarked on her training at the hospital in Blanchardstown for the last four years and is confident of a staff position upon completion of her nursing degree.

“It is a lovely place to work,” she added.

“Everyone is so good to one another and I am really looking forward to working there.”