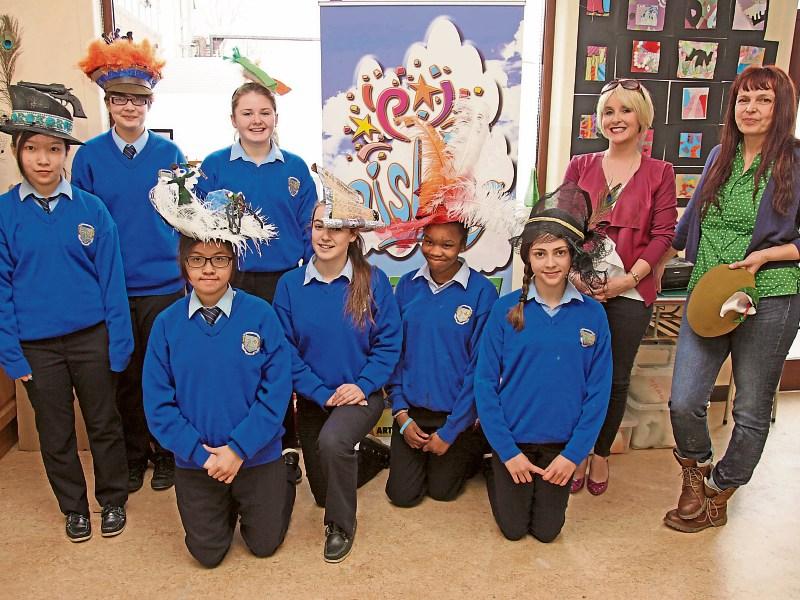 The second year Art students of Meán Scoil Mhuire are using their heads - literally and figuratively - for the Aisling Children’s Festival 1916 commemoration project.

The students and their teacher, Ms Clare Daly, have spent six weeks working with renowned milliner Wendy Louise Knight, creating 1916-themed hats in workshops organised by the Aisling Festival as part of the centenary celebrations.

Wendy Louise has been involved with the Aisling Festival for a number of years, carrying out hat-making workshops with local primary school pupils.

This workshop was different, however, in that the secondary school students had free rein on the type of hat they created and the design and material they used, leading to some spectacular results.

“At first we spoke about what 1916 meant to them and then all the girls did lovely mood boards,” Wendy Louise told the Leader, revealing the lesson that she shared with the girls: “Hats don’t have to be regular hats, they can be Art pieces.”

In creating their pieces, which were inspired by the women of 1916, the girls took these words to heart. While some opted to make their own mark on the traditional medical and military head wear, others modelled theirs on the GPO and the Proclamation.

“We got some amazing hats,” Wendy Louise smiled, adding that fifteen girls had taken part in the workshop and will display their hats at the commemorative parade in Longford on April 24. This, after winning the Youth Endeavour Award at the 2016 St Patrick's Day Parade in Longford town. The girls also got a chance to show off their work to Irish TV, who filmed a segment at the school on Monday last.

Admitting that she’ll miss her trips to the school, Wendy Louise revealed that the workshops were greatly enjoyed, not just by herself, but by the students and their Art teacher.

This was backed up by Meán Scoil Mhuire teacher and Aisling Festival Committee member Clare Macko, who explained that the school and the festival wanted to do something that would inspire the students, and allow them to “design, create and then showcase” their work.

“It's a combination of history, creativity and design,” she added. “The students loved it and while Wendy was saying it was their first experience of millinery, a lot of them are very interested in it now.”

Thanking Longford County Council and Ireland 2016, who made the funding available, Clare also added that the Aisling Children's Arts Festival will return this Autumn, running from October 23 - 29.