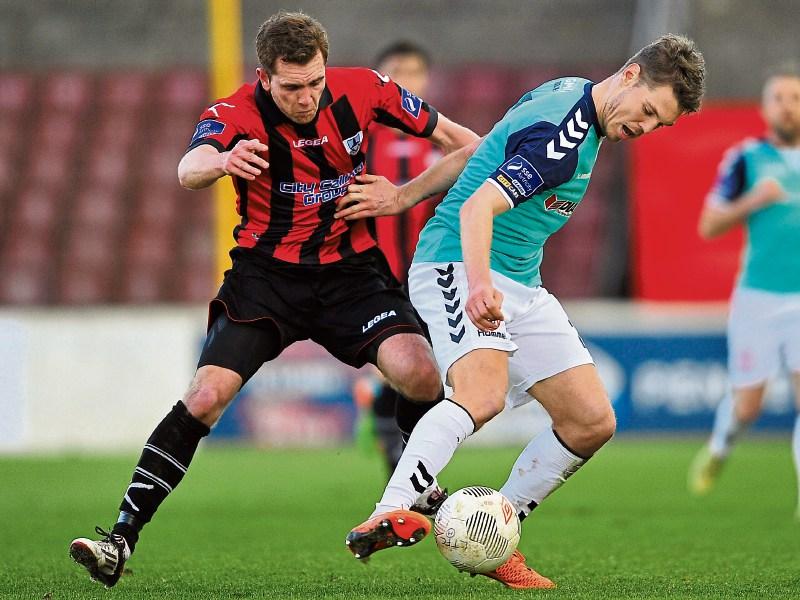 After a poor run of results, Longford Town offered some hope to their loyal supporters when they collected a vital league point in the draw against second placed Derry City at City Calling Stadium on Saturday night last watched by the disappointing official attendance of 451.

This positive result moves the Town off the bottom of the Premier Division table and up to 10th and on Saturday night next they take on fellow strugglers Sligo Rovers at the Showgrounds.

Town manager Tony Cousins made four changes from the team that were defeated 4-0 by Dundalk at City Calling Stadium the previous week. John McKeown, Don Cowan and local lad Tristan Noack Hofmann started along with Mark Rossiter who made a welcome return from injury.

Hofmann, at just 17 years of age, put in an accomplished performance at left-full in his league debut and he is a product of the UCL Harps club in the Longford & District League. His fellow resolute Town defenders definitely played their part in this result, as did keeper Paul Skinner.

Skinner made several fine saves including one from a Rory Patterson penalty in the first half. But he was eventually beaten in the 73rd minute by a cracking Patrick McClean strike from about 35 yards out. The Town had taken the lead in the 26th minute through David O'SullivaBoth sides had early chances with Barry McNamee shooting just over the bar in the 10th minute. Kevin O'Connor then brought a great fingertip save out of Derry keeper Ger Doherty before Skinner brought off an excellent save to deny Patterson in the 23rd minute.

Derry had a big chance in the 34th minute to level matters when they were awarded a penalty after John McKeown brought down Patterson in the box but his spot-kick was saved by Skinner and then in the 39th minute Dean Jarvis saw his shot crash off the crossbar as Derry continued to press for the equaliser.

The visitors dominated the majority of the second half in piling on the pressure and in the 51st minute Rory Patterson set up Ronan Curtis but his effort was saved by Skinner.

Skinner was called on a number of times while his defence stood firm to deny Derry. But in the 73rd minute the Town resistance was eventually broken when Patrick McClean (the younger brother of Republic of Ireland international James McClean) unleashed an unstoppable long range shot past Skinner into the back of the net.

Longford felt aggrieved one minute later when referee Sean Grant denied them a penalty after Derry defender Ryan McBride bundled over David O'Sullivan in the box.The Wexford official waved play on, much to the frustration of the Town bench and the home supporters.

Both sides went in search of a winner and in the 84th minute Peter McGlynn saw his shot go over the bar in a Longford chance while five minutes later Barry McNamee wasted a good opportunity for Derry when he messed up his effort after receiving the ball from Patterson.

Four minutes of stoppage time was added on at the end of the game but there was no late drama as the Town held out for a hard earned point which was a good boost in the bid to get out of relegation trouble.

And there was some more good news for Longford as striker Lee Duffy, returning from a lengthy injury absence, was brought on in the second half to make his first appearance in the Premier Division this season.