Longford ladies lose out to Antrim in league semi-final 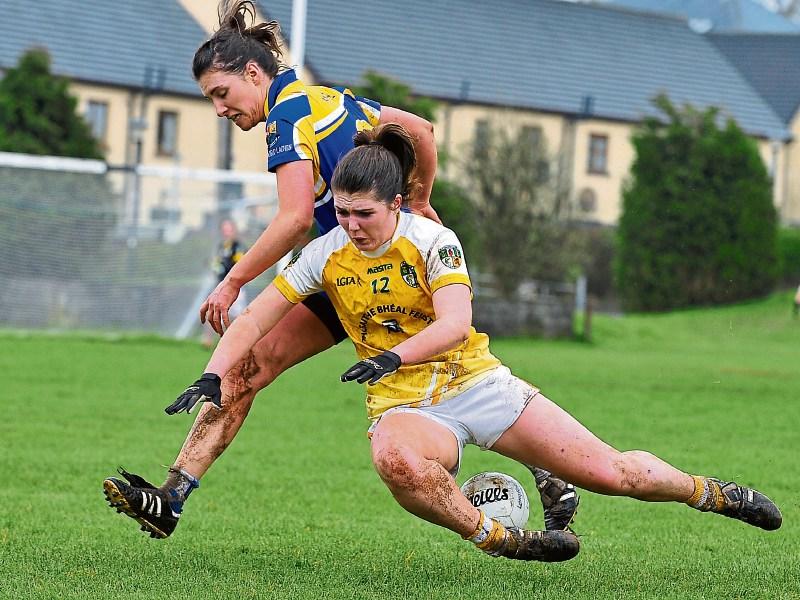 Longford at O'Raghallaigh Park in Drogheda on Sunday last.

Meadbh McCurdy got the Saffrons goals in the 4th and 15th minutes. Longford though were able to recover from them and in the early stages of the second half they were ahead by two points.

When Aoife Darcy hit over a free to draw Longford level in the 48th minute it was to be their final score for 10 minutes as Antrim hit a purple patch and kicked over five points in a row. Longford just couldn’t contain them and failed to get scores during that period.

Orla Noonan got the game’s opening score in the third minute but one minute later Antrim got their first goal; an Eimear Gallagher free found McCurdy in a great position and she made no mistake in raising the green flag.

Darcy got her first point of the game (free) in the fifth minute before Antrim keeper Anna McCann pulled off a fine save to deny Laura Burke. Points were traded between Gallagher and Emer Heany and then a great point from Darcy drew Longford level in the 12th minute.

In the 15th minute McCurdy got her and her side’s second goal of the game when she scored from a tight angle. A free from Clare Timoney put four between them in the 17th minute. Longford responded well and points from Heaney, Noonan and Darcy (free) cut the deficit to just one going in at the break; 2-2 to 0-7.

Longford hit two wides inside the opening two minutes of the second half before they got their first point from Heaney. Down the other end Gallagher was on target for Antrim. Longford began playing well and a nice point from corner-back Aisling Cosgrove and a Darcy free put them ahead for the first time since the third minute in the 39th minute.

Another Darcy free put them two ahead minutes later but Antrim kept at Longford and Gallagher (free), Mairead Cooper and Timoney (free) edged the Ulster side back in front by the 46th minute. Darcy fired over another free to draw the sides level again in the 48th minute but that was Longford last score until the 58th minute.

Two Timoney frees put Antrim ahead by two in the 52nd minute and the momentum was with them. Longford just couldn’t get a hold on game and when they won possession they gave it away cheaply.

Two fine Gallagher points extended Antrim’s lead to four in the 54th minute and then Cooper hit over her second point of the game to leave five between them. Longford got a much needed point in the 58th minute through substitute Ann Duffy but it was too little too late as Antrim held on for a place in the league final.