Blood donation: "The amount of good that one little bag can do is immense"

A cheerful atmosphere filled the Longford Arms, as generous locals lined up to give blood 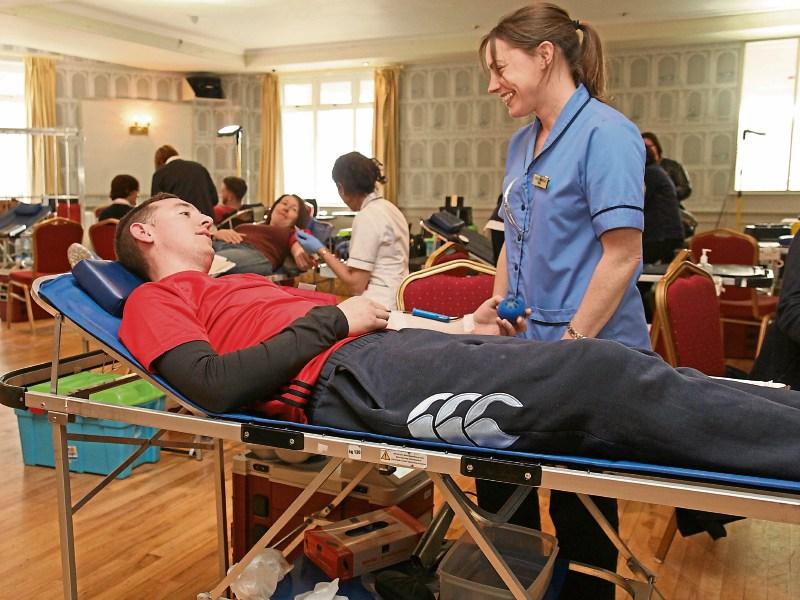 According to the Irish Blood Transfusion Service (IBTS), one in four people will need a blood transfusion at some point in their lives, with over 1,000 people receiving transfusions every week in Ireland. Yet, only 3% of the population donate blood.

With that in mind, the Leader popped down to the blood donation clinic run by the Irish Blood Transfusion Service, which was based in the Longford Arms Hotel on Wednesday and Thursday, March 30 and 31, to see how the process goes.

Arriving at the Longford Arms Hotel at approximately 5pm (the clinic ran from 4.30pm until 8pm to allow for potential donors to call in after work), we were met by a busy, transformed ballroom.

At the door, there was some information on reasons why people may be unable to donate and the period that they will be excluded from doing so - for example, those under eighteen years of age cannot donate until they turn eighteen, while those who have had a body piercing or tattoo should wait for at least four months before giving blood.

Inside, we were met by the Nurse in charge, Theola Finnegan and Team Leader Mary Stewart, the latter of whom showed us around the room.

“Once you come through the door, you register with one of the registration clerks,” Ms Stewart explained, pointing to the first ‘station’ in the room. “There you get your health and lifestyle questionnaire.

“You get one of these every time you come in and you fill it each time you come in so we can catch up with your recent medical history,” Ms Stewart continued, adding that the main focus of the team is on the “safety of the product being given to the recipient”.

Those who register then get a folder full of information on the donation process and anything that may occur before, during or after the donation.

The second step, Ms Stewart explained, is a station to check haemoglobin levels, which people often refer to as iron levels. A ‘fingerprick’ blood test is carried out and donors must have a certain haemoglobin level to continue with their donation.

“The next person,” Ms Stewart said, moving on to the next station, “goes through the questionnaire with you to make sure you’ve understood the questions.” First-time donors have one extra step to the process, in that they undergo an interview with one of the medical team to go through everything in fine detail.

“Once you’re cleared that the questionnaire is okay and the haemoglobin level is okay, the next step is to hop onto a bed,” she continued, gesturing to the centre of the room, where several locals were in the process of having their blood taken.

“The actual giving of blood is quite quick,” Ms Stewart affirmed, before adding; “Once the donation process is complete and we’re happy the donor is well, we take them off the bed and bring them to the refreshment area.”

Just under a pint of blood is taken from each donor, and while there are some occasional cases of slight bruising, or people feeling slightly unwell after the process, it’s rare, and there’s always help at hand if this occurs.

Getting into the more technical side of things, Ms Stewart revealed that every bag of blood donated is carefully labelled and bar coded, with machines working in the background to mix the blood with an anti-coagulant,which stops the blood from clotting.

At the back of the room, the blood already taken was carefully stored, awaiting the temperature-controlled van, which would later transport it to the National Blood Centre at St James’ Hospital in Dublin to be processed.

Ms Stewart told the Leader that the blood can be at another hospital within 24 hours of being collected, while blood is stored for up to thirty-five days.

“They always like to have a certain number of days’ supply,” she confirmed. “When it gets below four days, it’s worrying. Donors can donate every ninety days or three months.”

One thing Ms Stewart was keen to point out, however, was that once someone walks in the door, they are not committed to giving blood. It’s a matter of choice, and, as she pointed out, it’s not for everyone.

Despite the hospital beds, the needles and the vials of blood, the most shocking thing in the entire room were the constant smiles on the faces of each and every donor who walked in.

“It’s always a happy environment,” Ms Stewart confirmed. “That’s what we find, that it brings out the best in people!”

She also pointed out that while it’s not something people can do in a rush - all in all, it can take up to an hour and a half to two hours - it’s a small price to pay for something that could save another’s life.

“When you think about it deeply, the amount of good that one little bag can do is immense.”

Peter Nevin, a native of Killoe, was just after donating blood for the twelfth time when the Leader spoke to him.

He happily told the Leader that he had started giving blood when he was in school, as a group of his friends decided to attend the clinic.

“I’ve no fear of needles at all, but they comfort you well here if you were somewhat scared. It’s a great cause for the sake of an hour or two,” he said, before encouraging people to come along. “Even come in and get tested or screened anyway!”

Another local donor was there for his second time.

“After my wife had our child I said I’d better do my bit,” he laughed, admitting that it had originally taken him five years to build up the courage to attend a clinic. “It was a great experience,” he admitted. “I have a slight fear of needles but I’ve no problem getting it now. I intend to come back regularly.

“It’s a great thing to do and it’s the least you can do. There are a lot of sick people, and if you’re healthy it’s a small thing to give back and help someone out.”

The next blood donation clinic will take place in Longford in approximately three months’ time and both new and regular donors are always welcome. For more information on the Irish Blood Transfusion Service or on giving blood, or if you have any queries about your eligibility to donate, visit www.giveblood.ie or call the Freephone number 1850 731137.