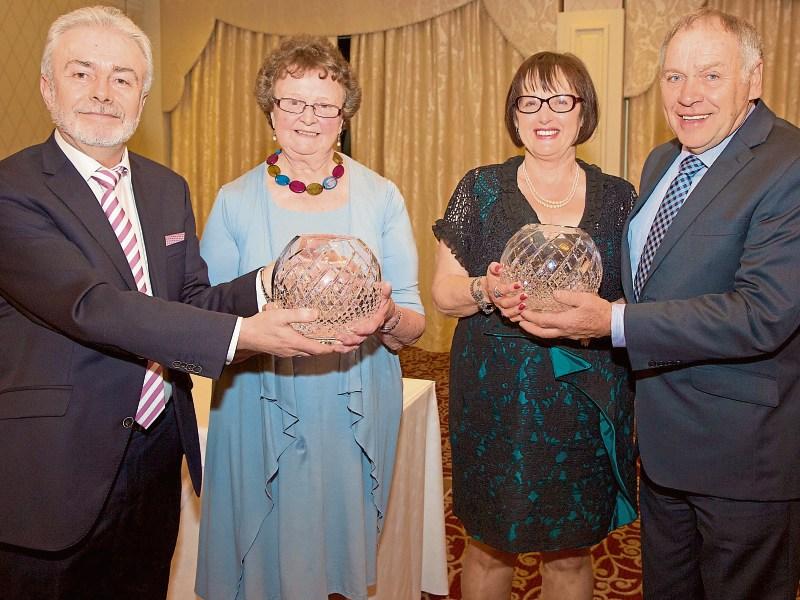 Receiving her accolade for one of the People of the Year Awards at the Longford Association in Dublin event on Saturday night, Tess Murphy noted that neither she nor Elsie Moxham, the joint winner, were natives of Longford.

However they were both clearly honoured to receive recognition from the Dublin Association for their work in founding Longford Women’s Link twenty-one years ago. In their speeches, both women remembered their co-founder Mary O’Hara who passed away in 2005.

Tess and Elsie met through the ICA and the organisation was out in force in Dublin on Saturday night to support the two women. Coincidentally, Gertie Egan from Kenagh was involved in the early days of Longford Women’s Link and her husband Paddy also received an award on Saturday night - the association’s Special Recognition Award.

In his acceptance speech, he spoke warmly of the ICA while joking that “it was the only organisation I was never let into!” While Gertie could not attend the awards on the night, a number of their daughters were there including Norah who had flown home from the US that morning for the event.

The Longford Association in Dublinhad return ed to the Red Cow Moran Hotel for their annual awards and this year’s event was another lively affair with Longfordians from near and far in attendance.

Speaking on the night, the Association President Liam Caldwell acknowledged the upcoming celebrations to mark the 50th anniversary of Longford’s National League win.

He spoke of the many events that had been organised by the Dublin Association 50 years ago to celebrate Longford’s victory.

There was sadness too on the night. Committee stalwart Gerry Quinn had received the sad news that morning that his sister Bridie had passed away in New York and Gerry, and his family, were remembered at the event.

Once the meal and the speeches were over, The Outlaws took to the stage and the floor filled up within minutes, with the ICA ladies leading the dancing in style, putting those of us with two left feet to shame.