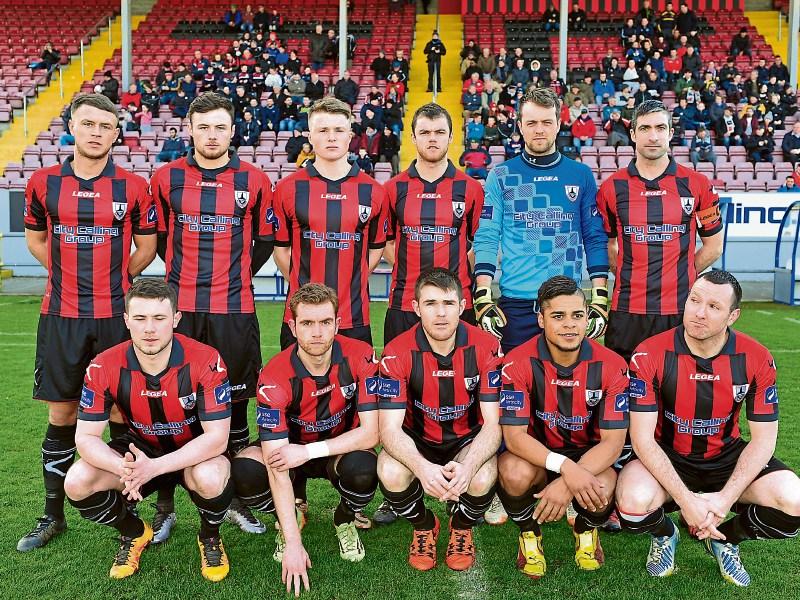 Longford Town crashed to their third league defeat in a row and their fifth in the Premier Division this season to end up bottom of the table as Dundalk inflicted a demolition job at City Calling Stadium on Saturday night last.

The league champions were in a different class as they cruised to a very easy win, scoring four goals in a rampant display. And it could have been even more such was the poor resistance offered by the home side who lacked ny real desire, much to the sheer frustration of the home supporters among the official 741 attendance.

With the wet weather the game had been in doubt and despite failing a pitch inspection at 2pm another inspection at 5pm qave the green light for the fixture to go ahead with the rain stopped.

Dundalk dominated right from the kick-off and took the lead in the 10th minute when a rash challenge by Kaleem Simon brought down Sean Gannon in the box and Ronan Finn made no mistake from the spot-kick.

Three minutes later Town keeper Paul Skinner made a fine save from David McMillan. Then in quick succession Dundalk hit the post twice from a Daryl Horgan free-kick and a Darren Meenan long range strike.

But Dundalk doubled their advantage in the 23rd minute when defender Brian Gartland rose high to head home Meenan’s corner. Then a free-kick from Meenan was headed wide by Andy Boyle in the 29th minute.

Town netminder Skinner pulled off a good save in the 37th minute to deny Ciaran Kilduff as the visitors continued to create chances and the second half was much the same with Dundalk very much on top. Early on the changeover Finn blasted a shot over the bar and then Longford had a rare chance when Dundalk keeper Gary Rogers saved from David O’Sullivan.

On the hour mark David McMillan headed Sean Gannon’s cross wide and then Kilduff forced another save out of Skinner before Meenan shot over the bar. Dundalk kept piling on the pressure and got a third goal in the 78th minute when a good move involving Horgan and McMillan saw the latter play the ball into Finn who finished the ball to the net.

In the 85th minute Horgan played in Meenan but he directed his effort over the bar and two minutes later Dundalk got their fourth and final goal as Finn completed his hat-trick. Horgan’s shot was cleared off the line by Josh O’Hanlon but Finn pounced on the loose ball to hit the target.

Derry City, who are alongside Dundalk at the top of the table, are up next for Longford Town at City Calling Stadium this Saturday night and the home supporters will be hoping for a better performance in the fierce battle to get out of serious relegation trouble.