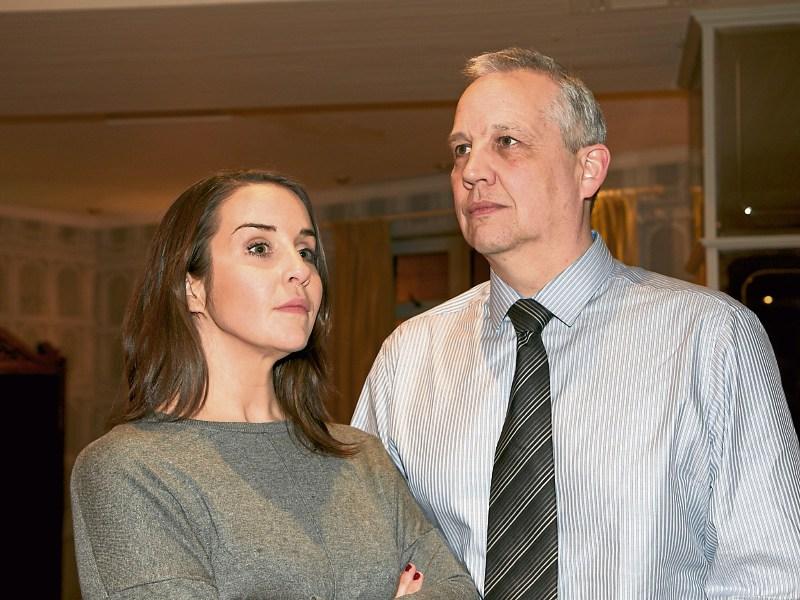 It has been almost seven years since her last show with St Mel’s Musical Society, but Janice Gibney is ready to step back into the spotlight as Morticia for the 2016 production of ‘The Addams Family’.

“I was just kind of chomping at the bit to get back on stage and get back performing,” said Janice, daughter of society stalwarts June and Robert Belton.

Referring to the social nature of the society, the mother-of-three said she jumped at the chance to get involved again, particularly when she heard ‘The Addams Family’ being mentioned.

“I had listened to the music of the show,” she told the Leader. “I didn’t know it before but when I heard that they were going to be doing ‘The Addams Family’ I was listening to the songs which are really fantastic.

“People won’t know them when they come to the show, but by the end of it they’ll be walking out humming them. They’re so catchy - it’s playing non-stop in the car with myself and the kids, it’s just on the go non-stop! And the show itself, it’s very funny.”

Admitting that she’s nervous about her highly-anticipated return to the stage, Janice laughed; “I was very rusty - I’d only been singing in the car and the shower!

“But it’s good to have the nerves before you get on stage because they give you that adrenaline boost.”

Though this is her first show with St Mel’s since 2009, Janice, who has also previously been involved with Backstage Theatre Group and Backstage Youth Theatre, has never been far removed from the theatre, not least through her job in Marketing and Promotions with the Backstage Theatre. She has also taken starring roles in the theatre’s in-house production ‘The Carnival at Glenaduff’ in 2011 and a Beezneez show ‘Callaghan’s Place’ in 2009.

However, the love for musicals is undeniably in her blood and it’s something that she has carried with her from her first performances in ‘Cinderella’ and ‘Aladdin’ and her work behind the scenes right up to her present role as Morticia, the Addams family matriarch.

“I was always kind of involved behind the scenes with both my parents. Dad was Stage Manager for a long time and he’s still helping out backstage and my Mam has been the Chairperson for the last few years, so it’s a big family affair.”

Janice has also been recognised nationally for her talents, earning a nomination for the prestigious Association of Irish Musical Societies awards for Best Actress when she portrayed Charity Hope Valentine in ‘Sweet Charity’ in 2007.

Just three years earlier, Janice won the award for Best Comedienne at the annual AIMS ceremony, having brought Miss Hannigan to life in the 2004 production of ‘Annie’.

Speaking now about her first leading lady role in several years, Morticia, Janice described her as “a 1950s starlet”, adding; “Her love for her family is central to everything. She kind of comes across as having a very calm, collected, cool exterior.”

Paying tribute to the hard-working committee, Janice believes that the musicals remain popular because of the reputation of the group.

“Over the years, even if it’s something new that they’re doing or if it’s an old school show that some of the audience might not be in to, there’s been this trust that’s been built up over the years. People know that the society will deliver a quality and a standard so even if it’s not really their taste, they’ll come along and trust that it will be a fantastic show.”

Janice is keen to highlight the talents of her co-stars and of course, Director Tim Landers, Musical Director Fintan Farrelly and Choreographer Emer O’Brien.

“There’s laughs in it for everyone. There’s bits that the kids will be roaring laughing at and then the bits that will go over kids’ heads that the adults will be sniggering into their hands at,” she added.

Finally, complimenting the cast, crew and their families for the dedication they have shown to the show, Janice smiled: “It’s a family affair on and off the stage!”

‘The Addams Family’ will run at the Backstage Theatre, Longford from Friday, April 15 until Saturday, April 23.