Kiernan's Model T rises from the ashes of 1916 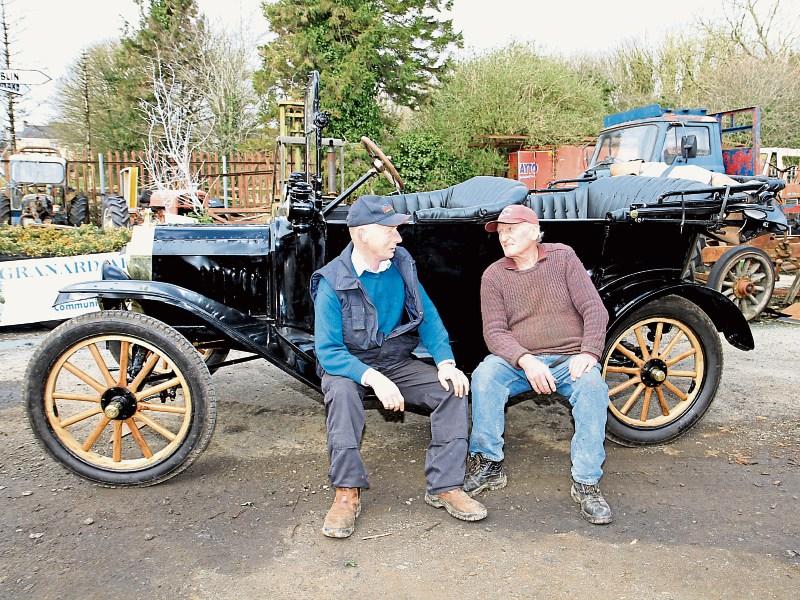 The restoration of a Model T Ford once owned by Larry Kiernan became a labour of love for Granard man Eamon Creamer.

It was a love affair that spanned the best part of 35 years but on St Patrick’s Day 2016 at the Ballymahon Parade, that famous car made an appearance in Co Longford for the first time in 100 years after Eamon and his team at the garage in the north Longford town knuckled down after Christmas and put the finishing touches to its restoration.

The story of this historic restoration struck a chord with RTE, who filmed Eamon and his beautifually restored car for their nationwide series 'Every County Has a Story' to mark the centenary of 1916.

Speaking to the Leader this week, Eamon recalled how, when he first saw the Model T Ford lying in a ditch in North Longford over 35 years ago, it was nothing more than a shell.

“It was a Ford Model T and is 100 years old this year,” Eamon smiled, before pointing out that the model was one of the first mass produced cars in the world by Henry Ford, whose grandparents originated from Co Cork.

Back in 1916, it was a brand new car when it arrived in Granard, purchased by the brother of Kitty Kiernan, Larry, who registered it as a hackney.

“Larry Kiernan was the owner of the Greville Arms Hotel and brother of Kitty Kiernan,” continued Eamon.

“Kitty was the fiancée of Michael Collins and Larry bought the car brand new in 1916 - we have the records from the Longford registrations office.”

Larry was a successful businessman in Granard and traded as LD Kiernan.

The car was used during the 1916 Rising when Larry drove two volunteers to Dublin.

One of those volunteers was Paul Cusack, a relative of Larry Kiernan’s wife.

Larry often collected Michael Collins from Ballywillan Railway Station and possibly from Edgeworthstown station as well, when he came down to Granard to visit Kitty.

Casting his mind back to the discovery of the car 35 years ago, Eamon remembers his disappointment when he discovered the condition of the car in the field, but with the gentle persuasion of a local vintage enthusiast, he brought the wreck back to his garage in Granard and spent 35 years slowly but surely restoring the car to her former glory.

“We found the car as bare skeleton remains in the Mullinlaghata/Cloncivid area 35 years ago,” he added.

“We were starting into the vintage then and a local man came to us and was very keen about this car that belonged to Larry Kiernan.”

That man subsequently brought Eamon to the field in which the car had been for probably the best part of 50 years.

“We thought we were going to see a complete car when we got out there, but when we arrived we could barely see it,” said Eamon who indicated that the car “had rotted away down into field”.

“The running gear in the car is the original but the upper body works are all new,” he continued.

“We made that over the last 30 years as we worked on the car in our spare time.

Up until recently, we would have had the car about 80% finished.”

But what really put the pressure on Eamon and his team to finish the restoration of the car came in the form of gentle persuasion and totally out of the blue - from a member of Granard’s Historical Society one evening last year.

“I’m a member of the Granard Historical Society and another member said to me one evening during the course of a conversation that it would be a good idea to finish the car and have it ready for display for the 1916 Commemorations,” said Eamon. Since Christmas all hands have been on deck to get the car finished.

“There is so much history attached to the car and it’s old so that makes it very attractive to people of all ages,” he smiled.

“We are very pleased to have this car and we are also enjoying the appreciation the general public have towards it as well.

“I would like to see it becoming a community asset - we have the Greville Arms Hotel here in Granard and both it and the car are closely related, so I hope that will help to improve people’s interest in history around this area.

He added, “There is a huge historic hub here in Granard and a lot more information has come to light in recent times as well.

“It's amazing what you can learn from just listening to people telling stories.

“Even if you consider Ballywillan for example; once a hive of industrial activity - now it is dormant.

“There are so many stories about people leaving the area for the last time or perhaps returning home from distant lands from that train station and it is wonderful to hear about all that.

“The car and the history associated with Granard provides all of us with an opportunity to have something to talk about, rather than complaining about the weather and the Government and so on,” the Granard man concluded.