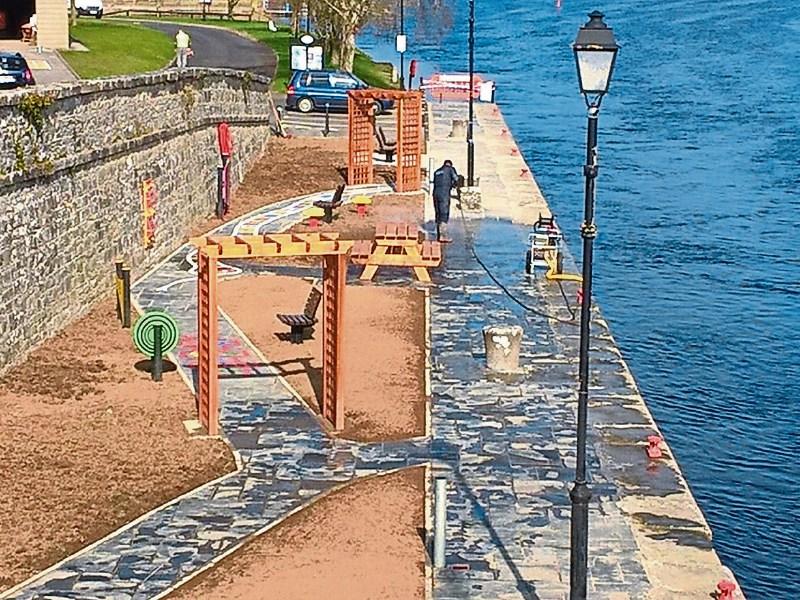 The waterfront at Ballyleague has been transformed thanks to a €90,000 investment in the amenity.

The project was undertaken as part of the Shannon Blueway, a multi-activity trail running alongside water which links walking, cycling, canoeing, paddle boarding, fishing and cruising with local towns and villages.

The development of a Shannon Blueway project has been completed in Ballyleague and Lanesboro where an Enhancement Project has improved the appearance and usability of this superb waterfront.

The Ballyleague/Lanesboro project refurbished the existing area beside the Shannon as well as the erection of a decorative safety railing to the old harbour.

The improvements will continue to expand Lanesboro as a navigational and water based activity hub,” explained Katrina McGerr of Waterways Ireland.

The project was 75% funded under the flagship REDZ project with Roscommon County Council and Waterways Ireland funding the balance through financial and in-kind support.

Waterways Ireland staff carried out the work over the winter 2015/2016 and it is now open for the enjoyment of residents and visitors alike.

The Shannon Blueway is a multi-activity trail running alongside water which links walking, cycling, canoeing, paddle boarding, fishing and cruising with local towns and villages.

It also aims to promote the local use of the Waterways and development of the 22 communities inter-connected by the Shannon River and linked canals.