No championship boost as Longford minors lose to Leitrim 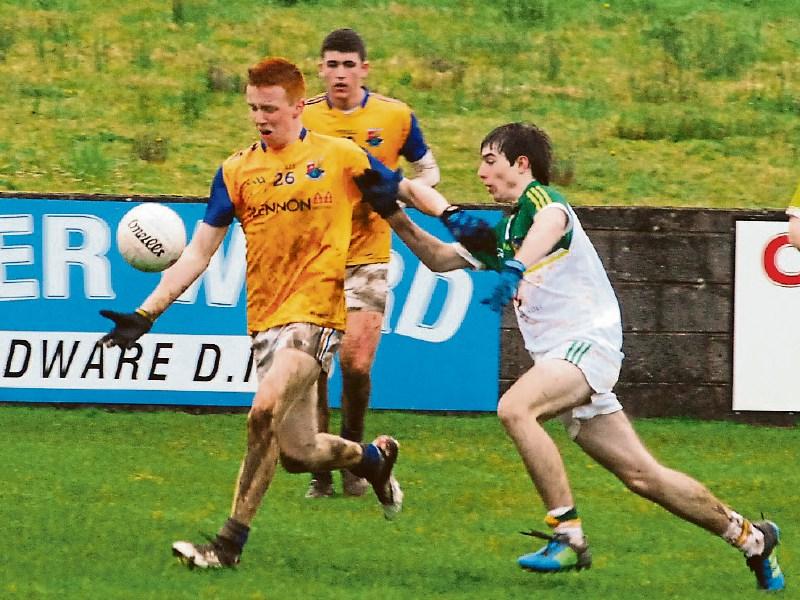 Despite getting off to a great start with a fine goal from full-forward Thomas McGann after only three minutes and who extended their advantage when midfielder Enda Farrell found the back of the net with a cracking strike midway through the first half, there was no championship boost for the Longford minors as they eventually lost out to Leitrim at Allen Park, Newtownforbes on Saturday evening last.

Played in difficult underfoot conditions on a wet pitch, lethargic Longford were second best on this occasion and while regulars Cillan Lee (Killashee), PJ Masterson (Abbeylara), Joe Kelly (Ballymahon) and Peter Lynn (Young Grattans) did not feature against Leitrim the general opinion is that Tony Devlin’s side are going to find it difficult against Westmeath in the Leinster first round clash at Cusack Park, Mullingar on Saturday week, April 16th.

Devlin and his fellow mentors Eugene McCormack and Conan Casey appear to be still undecided as to what their strongest team is and there is plenty of room for improvement in the build-up to the match that really matters.

Midfielder Ronan Healy was dismissed for a harsh black card in the 12th minute and Longford faded right out of contention in the second quarter after getting the two goals and only managed one more score in the first half with Enda Farrell shooting over the bar in the 18th minute.

Leitrim were enjoying the better of the exchanges and went ahead for the first time thanks to a well struck individual goal from prominent corner-forward Riordan O’Rourke in the 29th minute after he had hit the post with his initial effort.

That left the neighbouring rivals leading by 1-6 to 2-1 at the break with three of the points coming from the accurate O’Rourke (two frees) while Seamus Sweeney, Alan Doonan and Darragh Rooney (free) were also on target.

Longford kept in contention in the second half with a point apiece from Rory Hawkins and Robbie O’Connell, who converted frees, but suffered a shattering blow in the 45th minute when Leitrim left-half-back Sean Harkin surged forward to fire home a terrific goal.

Leitrim were 2-9 to 2-3 in front at that stage, with their other three points coming from Riordan O’Rourke (free), Darragh Rooney and Caleb Duffy, and their dominance continued with a trio of further scores (two frees) from Rooney (2) and O’Rourke.

Longford were now nine points adrift but a couple of goals in quick succession from Rory Hawkins (penalty) and half-time substitute Brian Sweeney in the 52nd and 53rd minutes made it very interesting indeed.

When Hawkins shot over the bar in the 56th minute, the gap was closed to just two points and a wide followed from Ruairi Harkin but Leitrim regained the upper hand to clinch a worthy win with three more scores through Caleb Duffy (a great effort), Riordan O’Rourke (free) and substitute James Glancy.