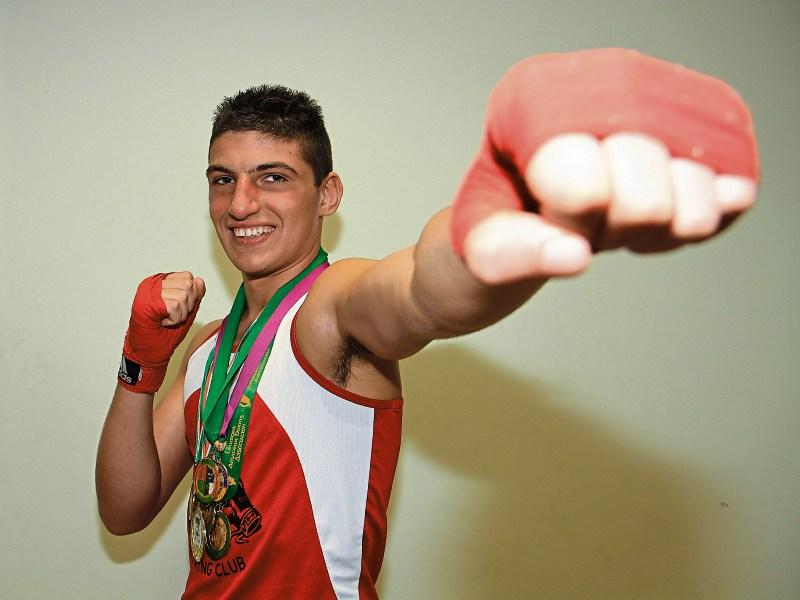 A young boxer from Lisnanagh near Edgeworthstown has set his sights on a professional career in the sport as he continues to outmuscle the opposition in his age group.

Fifteen-year-old Pierre Stokes first started boxing just over three years ago and already has 10 medals in his collection at club and regional level. He hopes to add an All-Ireland title to that list later this month when he competes in the finals at the National Stadium.

“I box out of Athlone Boxing Club and my coaches there are Rory Parkes and Kenny Ikponmwosa,” he explained. “Cheyanne O'Neill, who is one of the country's top female boxers, also boxes there.”

A son of Kevin and Margaret Stokes, Pierre had his first competitive fight in 2013, when he competed in the Offaly County Championships.

“I had only been training for two weeks,” he admitted before adding that he won the bout. “I went on to Leinster and got majority decisions all the way through. I got to the All-Ireland final but I damaged my shoulder in a car accident two days beforehand and I ended up losing a split decision by a point.”

His father pointed to his positive mentality in such situations: “he has the heart of a lion. He never whinges if he gets beaten and if he loses he comes back stronger.”

That attitude is reflected in Pierre's daily training regime, which can take up to five hours.

“He weighs 75kg but bench presses 100kg and he runs 15 miles a day, and he'll do sprinting after that. He also skips and works on a 16-stone exercise bag for an hour non-stop, and he's a tip away from a black belt in Taekwondo, which he does with Jan Bartels,” Kevin said. “They're classifying him as a powerhouse now; he's still learning and now he's sparring with pros.”

The proud father also attested to Pierre's dedication towards becoming a professional by saying, “he'll do his boxing in the ring, not out on the roads.”

“I also lift 25kg dumbbells; I do sit-ups for an hour and then I do press-ups for another hour,” Pierre continued, saying it is essential if he wants to realise his ambition of becoming a professional heavyweight boxer.

“I admire Mike Tyson and I watch all his fights; he always went for knock-outs, taking out his opponents with hard hits. Points don't matter when you can do that.”

Pierre is currently in his Junior Cert year at Templemichael College in Longford and previously attended St Mary's National School in Edgeworthstown.

“The deputy principal, Mr O'Rourke, is very helpful when it comes to my training schedule,” he said.

The hard-hitting boxer has 12 brothers and sisters, with his younger brother Tom also having a passion for the sport.

“He's nine years old and they call him 'The Hitman'; he's the talk of the county in his age group” father Kevin said of the fleet-footed youngster. “They put 11, 12, and 13 year-olds up against him and he can beat them all.”

As Pierre continues his preparations for the All-Ireland's, Kevin believes he has a strong chance of clinching a title this time around.

“He'll win an Irish title, no problem. All he needs is for the judges to be fair.”