Tailor made for the 1916 Rising celebrations

Mounted Garda Unit uniforms were made in Longford 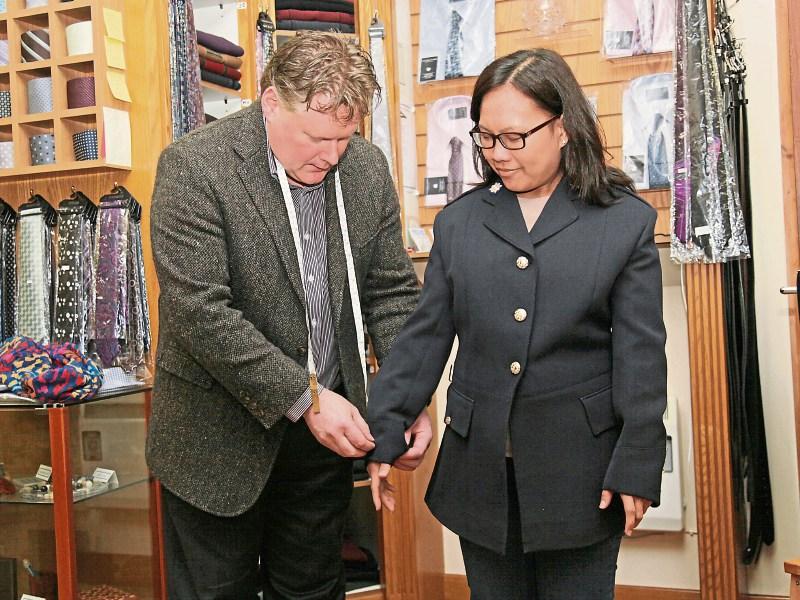 We have heard a lot about the role played by Longford people in the Easter Rising but one local company played a big role in the recentenary celebrations as well.

Longford town based firm Kelly Menswear were the creators behind ten present day custom-made outfits for the Gardai's Mounted Support Unit, which they wore during the recent Easter weekend celebrations.

David Kelly, who runs the long established firm alongside his father Tom, on Athlone Road, Longford, said the occasion was one that will live with him for some time to come.

As he pondered that fact, he also explained how the events of last week came to pass.

“The long version of the story behind it is garda uniforms are brought in from abroad from a company in Monaghan,” he said.

“But when a guard gets promoted to Inspector level, they get a box of cloths from a store in Santry and with all the badges, buttons and other regalia that goes with that they then have to go to a tailor to get a dress uniform for state occasions, court appearances and other functions that are made to measure.”

One of only three companies nationwide to be officially credited with that responsibility, David and his team were naturally thrilled when they were called to make the outfits for the centenary celebrations.

“We are here 25 years or so still plugging away so it was nice to have played our part,” added a humble sounding David.

The one downside, apart from travelling up and down to Dublin like the proverbial yo-yo, was not being offered the chance to sample some of the Aras' finest chinaware.

“I was down at least four times at different stages of the fitting process but unfortunately, no, I didn't get to have a cup of tea with the President,” he joked.

“We also made some uniforms for the ambulance service as well and and a lot of the higher ranked guards would have been wearing uniforms that were made by us but wouldn't have especially been made for that parade,” he concluded.