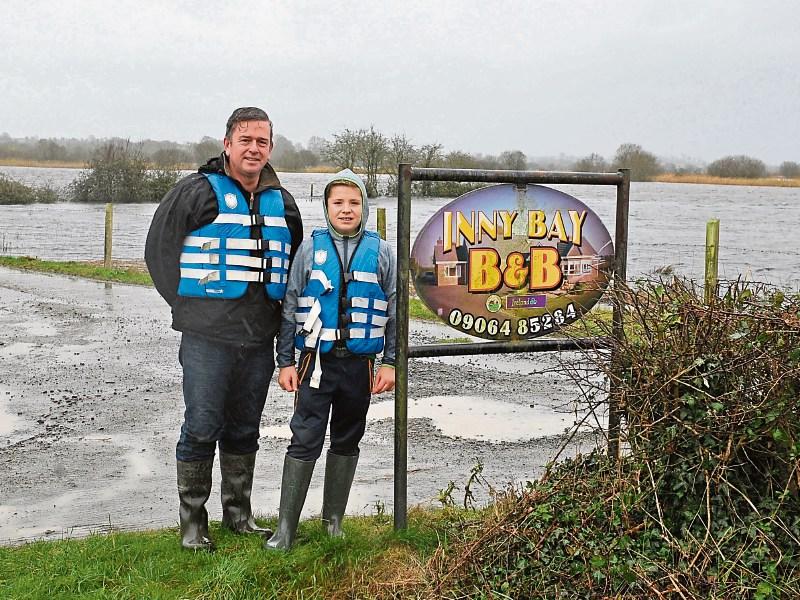 It's more than four months since countless homes across County Longford began feeling the full brunt of Ireland's storm and flooding crisis.

Several families were forced to seek alternative accomodation while others had to rely on tractors, and in some cases boats, to gain access to their homes.

Much of that unrest centred on the southern end of the county where Civil Defence teams, ably supported by local authority crews, worked round the clock to shore up flood-stricken properties.

The extent of the problem became so virulent that the remains of a Longford man had to be taken by boat for burial to Newtowncashel's Saint's Island Cemetery due to erosion damage to the island's causeway.

Fast forward the best part of four solid months and the after effects of what Storms Desmond and Frank left behind are still very much evident.

Longford County Council has already admitted it expects to fork out in excess of €2m to alleviate the county's worst affected areas.

Last week, the Leader told of how some of that State centred funding has already been put to use in resurfacing and restoring flood damaged roads in the southern end of the county.

This week, the Council have confirmed a total of €1.2m has been handed down to carry out repairs on badly damaged roads, bridges and culverts.

A further €420,000 has also been made available for “operational expenditure” purposes associated with dealing with ancillary clean up costs, maintenance, drainage, pumping and outlays for sand bags.

But for disaffected farmers like Annagh's Paul Foxe, throwing money at road reconstruction is only half of the problem.

“We got a very bad doing from the word go,” he bluntly put it.

“It was so bad that for nine weeks we had to use a boat to have any sort of access at all.”

For a farmer with 45 cattle and 40 sheep to tend to on a daily basis, the demands facing Paul became greater and more challenging by the day.

To make matters worse, Paul has also been left counting the cost of the recent flooding crisis after spending sizeable sums reseeding large portions of land.

“We did that over the last couple of summers and now you are left wondering if we do it again will the same thing happen?”

The ramifications of that decision run deep, especially as much of Paul's land has been left devoid of any grassland.

“Most of the fields are black,” he admitted.

“The fencing has also been affected too as there was up on eight feet of water on the land at one stage.”

Flood damage apart, the receding waters have left behind plenty of other headaches, most notably in the form of domestic household rubbish swept in from other areas.

Among the debris has included glass bottles and cans and even electrical items such as televisions.

To deal with those costs and the untold damage to his farm holding, Paul has attempted to seek emergency funding through the IFA and Teagasc.

However, the south Longford farmer conceded securing any financial support was not a foregone conclusion.

“At this stage, I am not sure what will happen.

“Teagasc did plead our case, but at this stage I just don't know.

“What I do know is this is our livelihood and these past few months have been very tough,” he said.