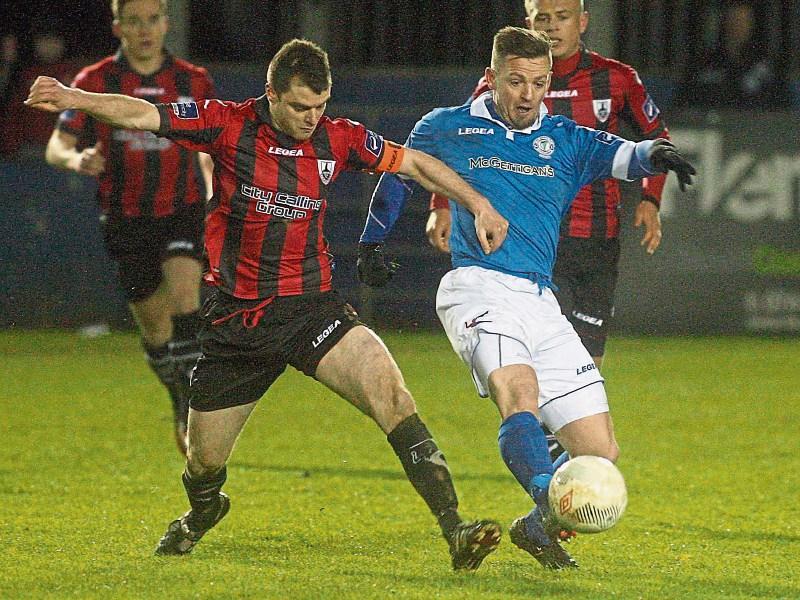 Badly hit by the absence of several regulars, a vastly understrength Longford Town side lost out to Finn Harps in the Premier Division clash in Ballybofey on Saturday night last with the only goal of the game coming from a penalty converted by Ryan Curran in the 58th minute.

Forced to field without such influential players as Kevin O’Connor and Pat Flynn, both of whom were suspended, four more players were also missing with injuries ruling out Conor Powell, Mark Rossiter, Rhys Gorman and Lee Duffy.

Gorman and Duffy have yet to figure in league action this season and the sooner Longford Town get back to full strength the better as they would appear to be facing a fierce battle to consolidate their top flight status.

Curran's goal 13 minutes into the second half was just rewards for a Harps side who were well on top in the periods before and after half-time. The penalty was awarded after Ethan Boyle's fine run into the area saw him hauled down by Longford defender Daniel O'Reilly on the end-line.

With regular penalty taker, Kevin McHugh on the bench, Curran took on responsibility and beat Town Paul Skinner from the spot. Up until that goal, Longford had rarely troubled Harps - aside from a couple of decent openings early in the game.

But once Harps got their noses in front, they allowed Longford come at them. The visitors almost struck a wonderful equaliser when Kealan Dillon's strike from outside the area fizzed past Richard Brush's right hand post.

But for all their effort and possession in the closing stages, Longford were unable to find a way to goal and Harps, for whom keeper Brush and the central defensive pairing of Packie Mailey and Keith Cowan were excellent, stood firm in holding out for a vital win.

Longford almost went in front after only seven minutes only for Brush to save from Josh O'Hanlon. It was a big moment in the game and the wake-up call for Harps who quickly went down the other end and almost scored themselves.

Tony McNamee slipped Ryan Curran in on goal and while his shot beat Skinner, Jamie Mulhall got back to scramble the ball off the line. After that, Harps were the better side and they had chances through Mailey and Dave Scully before Ethan Boyle fired just over the bar.

Immediately after the restart, Harps pushed Longford back again with Scully and Cowan both going close before the goal eventually arrived to decide a tight contest. It was a first win in nine games for Harps over Longford Town, who are away again on Friday v Bohemians.