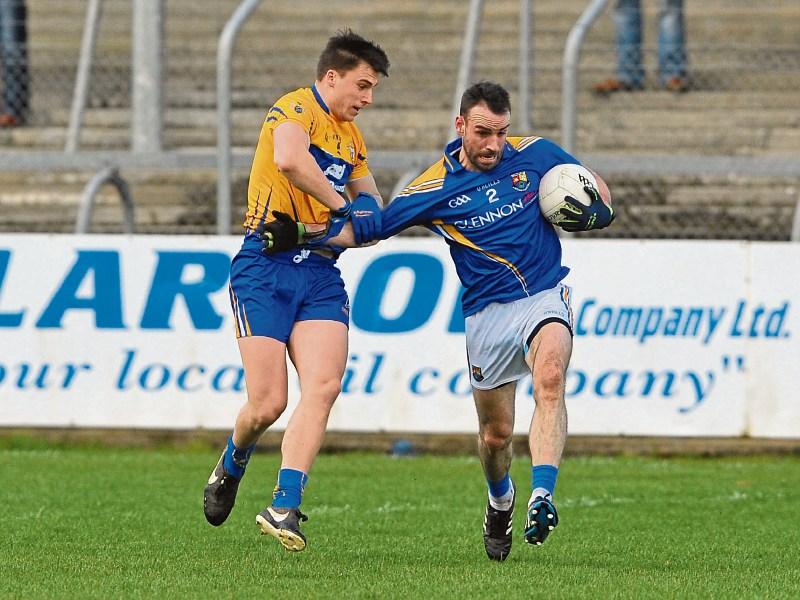 In producing their poorest performance in the National Football League this season, Longford crashed to a bad defeat against Clare in Ennis on Easter Sunday.

It was a reality check for the players who were supposedly growing in confidence after winning their previous two games in Division 3 but are now dragged back into a relegation battle.

Apart from a great start which yielded a well-taken goal from midfielder Michael Quinn in the 6th minute, there was little else for the Longford supporters among the 1,226 attendance at Cusack Park to get excited about as superior Clare took over completely in the second half to win by the wide margin of 11 points in the finish.

Right throughout the game it was the midfield dominance asserted by the powerful pairing of Gary Brennan (a top quality player) and Cathal O’Connor that proved to be a decisive factor.

And it could have been even worse for Longford (minus the services of the injured Liam Connerton) as the banner county squandered a number of goal chances.

Clare were twice denied by opposing keeper Paddy Collum who made a couple of great point-blank saves in the second half and the winners could afford the luxury of kicking a total of 14 wides.

A few missed chances proved costly for Denis Connerton’s side in the early stages of the game before Barry McKeon put Michael Quinn in for the goal. And while Clare was playing against the strong wind in the first half they still enjoyed the greater share of the possession.

The emphatic manner in which physically stronger Clare were cutting through the Longford defence was clearly a cause for concern. And from the moment Gary Brennan set up David Tubridy for a goal in the 17th minute the pressure was mounting on the midlanders who were in serious trouble when they ended up trailing by 1-7 to 1-6 at the break.

Right-half-back Jamie Malone was a real menace with his penetrating runs forward and apart from setting up the Clare goal he also fired over two points in the first half. David Tubridy also accounted for a brace of points

(play and free) while Eoin Cleary, Keelan Sexton and Cathal O’Connor were others on target for the home side.

Longford were struggling but managed to remain in contention thanks to the free-taking of Brian Kavanagh, who converted four scores, while James McGivney and Brian Farrell landed fine points from play in the first half. But they had a lucky escape in the 19th minute when a last ditch tackle by Colm P Smyth denied Pat Burke the chance of a goal that was there for the taking.

With the sides deadlocked at 1-6 apiece, Longford went close to regaining the lead in the 34th minute with a shot from Mark Hughes that drifted narrowly wide. And it was Clare who hit the front before the break with a very good score from Jamie Malone.

Second best in most positions on the pitch and who had to face the strong wind in the second half, the writing was on the wall for Longford and Clare moved quickly to establish a firm grip on the game.

A point apiece from Eoin Cleary and Jamie Malone extended the advantage before the visitors were given a glimmer of hope when Dessie Reynolds got through for a goal chance but he lost the ball and the danger was cleared with three minutes gone on the changeover.

That was the signal for Clare to finish Longford off and two more points followed from the excellent Jamie Malone (ending up with 0-5 to his credit) who was a constant threat before Brian Kavanagh kicked a free wide in the 41st minute which was very demoralising indeed.

Longford were reeling on the ropes and in a stunned state for the remainder of a very one-sided second half as rampant Clare clocked up another eight points in a row through Keelan Sexton, Pearse Lillis (2), David Tubridy (2 frees), Eoin Cleary (2) and substitute Shane McGrath to win with ease.

It was a sickening experience for the loyal Longford followers who made the journey down to Ennis on a wet and windy day in the hope of another victory. But it was not to be as Clare moved into pole position for the second promotion place in their quest to earn a crack at Kildare in the Division 3 league final at Croke Park.

To their credit, Longford did stage a determined late rally and eventually got their opening score of the second half when Brian Kavanagh converted a free with four minutes of normal time remaining.

Kavanagh fired over another free immediately and following a bad wide by substitute Paul McKeon there was a chance of snatching a late consolation goal but James McGivney’s close range shot was blocked down.

Back came Clare to register their final score when David Tubridy (play) shot over the bar. Then Longford substitute Larry Moran squandered a decent opportunity of a goal with two attempts before Diarmuid Masterson landed a good point from a tight angle in the second minute of stoppage time.

So whatever hopes the county had of gaining promotion have disappeared and they now need at least a draw in their final fixture against Westmeath at Pearse Park on Sunday next to make absolutely certain of securing Division 3 status for another season.

The neighbouring rivals, on the other hand, need a win to be sure of avoiding the dreaded drop in a congested relegation tangle that also involves Sligo, Offaly and Tipperary to determine who goes down to Division 4 along with Limerick.