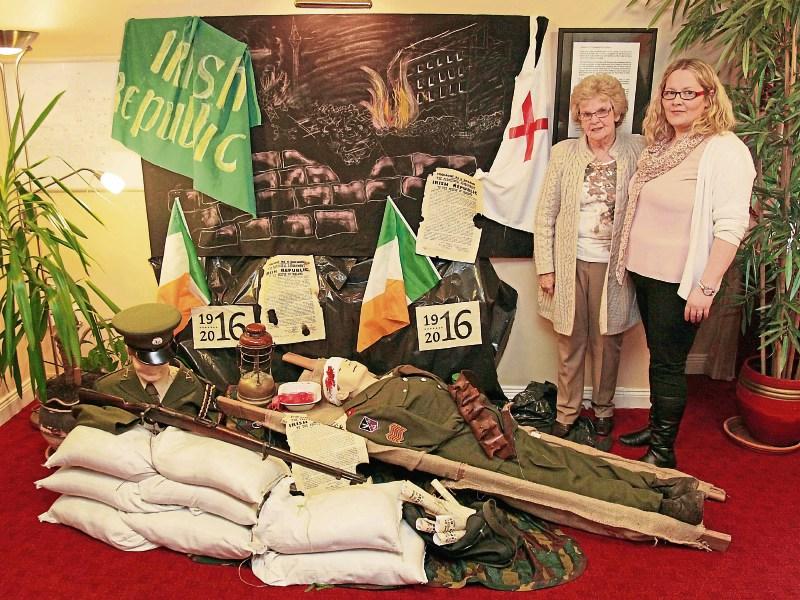 A long forgotten rifle dating back to 1898 was the centrepiece of a memorial in honour of those who took part in the Rising which was unveiled at Laurel Lodge Nursing Home last week.

Sergeant Lou Tormey, who participated in the flag presentation which took place as part of Laurel Lodge’s 1916 celebrations last week, explained how the rifle - a German Mauser ended up in Co Longford.

“This is an 1898 model and was used in the First and Second World War by the German Army,” added Sergeant Tormey.

“This particular model was presented to the 4th Cavalry Squadron in Longford Barracks by the estate of Lord Granard in Newtownforbes.”

The rifle, which was taken in action in Germany during the War is believed to have been in Longford for the best part of 100 years.

It was subsequently decommissioned and brought home as a trophy and was part of Laurel Lodge’s reenactment tribute to 1916.

“We had been discussing with the residents what could be done at the nursing home to commemorate the Rising,” explained Ms Murphy before pointing out that as well as the music, song and dance from that period in Irish history, residents felt that the focus should be on making it as realistic as possible.

Certainly, observing the scene in Laurel Lodge last week, it’s as close to real as you can get!

The uniforms and the gun were gathered to bring the battle scene to life, and they also researched as much information as they could, not just on the signatories, but on the Longford participants as well.

All of this information is proudly displayed along the walls alongside copies of the pages from the Longford Leader during that time and photos of those involved.

“We notice now that as the residents and the families are going past the reenactment, they are talking about it and there is so much more discussion and knowledge about the Rising now,” added Ms Murphy.

“It has sparked a new interest across the board and it really is wonderful to see that happening.”

Meanwhile, Ms Buckley added that Michael Collins' connection to Granard where his fiancée Kitty Kiernan lived, wasreferred to by many residents .

“All of this has evoked memories for the residents - many are remembering now the stories about the Rising that they may have heard as children and it has provided everyone with the opportunity with something to talk about,” she added.

“The deep historical connection with Granard was also significant; little did we know when we began this journey what an amazing experience we would all have, it has been amazing.”