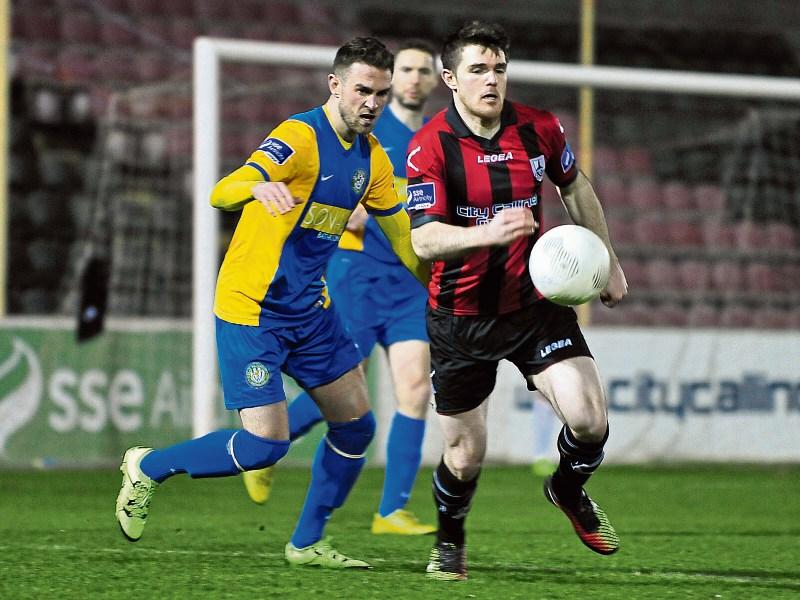 After suffering two defeats in a row, Longford Town collected a point at home to bottom side Bray Wanderers in a dismal drawn encounter at City Calling Stadium on Saturday night last.

Such was the poor quality in this Premier Division league game that neither goalie was made work or forced into making any decent save of note.

Just like the previous home game against St Pat’s, the Town were reduced to 10 men after midfielder Kevin O’Connor was sent off for a second bookable offence in the 79th minute. There were two rash challenges that warranted yellow cards but Longford felt aggrieved that some tough Bray challenges went unpunished.

It was a disappointing night for the Town in terms of injuries with Mark Rossiter and Conor Powell forced to retire during the course of the game. Both players sustained hamstring injuries and could be out for some time.

Injuries have really hit the defence with Noel Haverty missing the game through injury and Rhys Gorman out of action with a broken ankle. Gorman’s cast is coming off this week while Haverty should be back for the Finn Harps game in Ballybofey on Saturday night.

It was the visitors who dominated the first half but their play in the final third let them down as they failed to test Town keeper Paul Skinner.

Bray’s only real chance came just after the 20th minute mark but Dylan Connolly’s shot flashed across the face of the goalmouth.

Longford were devoid of ideas and couldn’t muster up any attacking moves but near the end of the first half they did create a couple of chances. First Josh O’Hanlon was put through on goal but opposing keeper Peter Cherrie was quick off his line to gather the ball and in stoppage time O’Hanlon headed straight at the Bray netminder.

The drab affair finally came to life in the early stages of the second half with two goals in a short space of time. With just a minute gone on the changeover Bray took the lead when a Jason Marks cross was flicked on by Karl Moore and then headed home by Dean Kelly who played with the Town last season.

The lead didn’t last too long and four minutes later the Town were level. Cherrie raced out of goals to clear a backpass but he shot straight at David O’Sullivan and the ball ended up in the back of the net for a fortunate equaliser.

That should have been a big lift for Longford but despite having possession they failed to create anything. As the game went on Bray started to get on top again but just like the first half their play in the final third let them down.

The Town suffered a setback in the 79th minute when they were reduced to 10 after Kevin O’Connor received a second yellow card for a foul on Robbie Creevy.

But despite having numerical advantage, Bray were unable to capitalise as the Town stood firm in holding out for a draw.