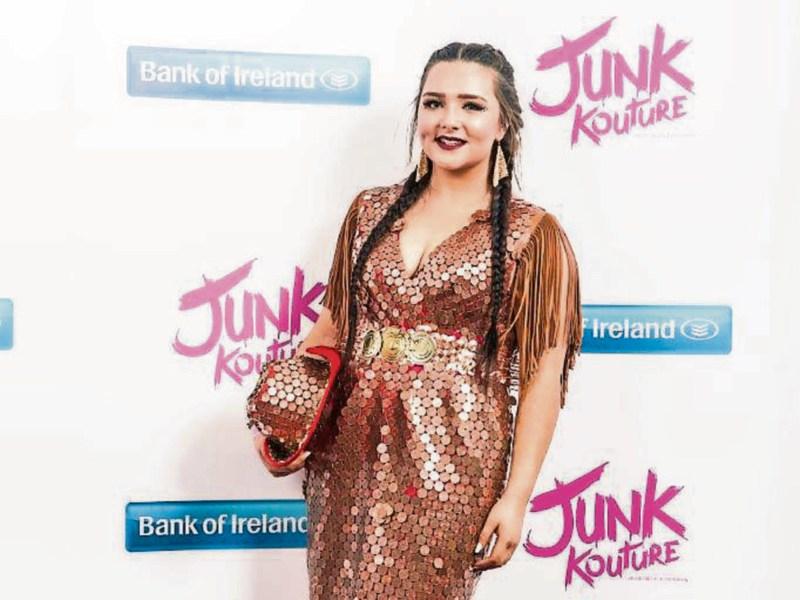 Longford has scored a hattrick in the annual Junk Kouture competition, with three outfits from local schools going forward to the Grand Final in the 3Arena, Dublin on April 14.

Having faced stiff competition, both in the online vote and the Western Regional Final in Castlebar, students from Cnoc Mhuire and Ardscoil Phádraig in Granard advanced to the next round.

Meanwhile, their second successful entry, ‘Dark Horse’, made by Luke Norton, Lauren O’Neill (model) and Cian McGrath, is made up of jockey’s silks and caps as well as horseshoes, racing tickets and other similar materials.

“We’re over the moon, and the students are delighted,” said Art teacher Charmaine Hetherton, admitting that the standard of the competition was extremely high this year.

She also happily pointed out that both outfits were well received both on and off the stage at the Regional Final, before thanking everyone who voted for the entries online as well as Bank Of Ireland Granard and the school’s students, staff and parents who supported their efforts.

She also wished Ardscoil Phádraig the very best of luck with their entry, ‘Copper Eyed Joe’, which was designed by Nicola Garry (model) and Ciara Columb using old 1 cent and 2 cent coins, which are being withdrawn from circulation.

Thrilled with the result, Art teacher Mary Cooney revealed that model Nicola Garry had brought the theatre to its feet with a rousing performance at the Regional Final.

“It was electric,” she smiled. “Nicola did herself and her school, her family and community proud.”

With a few minor tweaks to be made and moves to be rehearsed, both students and Ms Cooney are excited to take part in the final, where they will be supported by a busload of students and teachers from the school.

“There were 1,200 entries originally, whittled down to 80 so it’s amazing,” Ms Cooney added.

Wishing their neighbouring school all the best in the final, Ms Cooney finally extended her thanks to Ms Tully, who has set up a Facebook page for Ardscoil Phádraig's Junk Kouture efforts.

Online voting will open again on Easter Monday, March 28, and the public are being urged to vote for the Granard students by logging onto the Junk Kouture Facebook page before April 8.