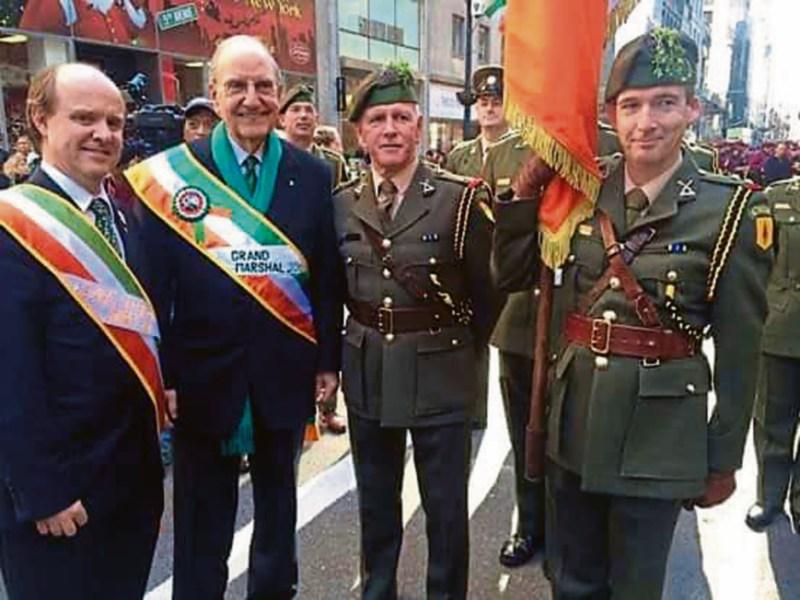 For one Longford man this year’s St Patrick’s Day Parade in New York was a very special occasion indeed.

For the first time in many years, the tricolour was raised at St Patrick’s Cathedral in downtown New York and Commandant Peter Keenan holds the honour of being the man to raise that flag.

The event took place on St Patrick’s Day as the Irish community in the Big Apple gathered together to commemorate the 1916 Rising, and by all accounts it was both a memorable and poignant affair.

“This all happened because of the 1916 Commemorations here in Ireland,” a very proud Commandant Keenan told the Leader on Monday.

“The various committee members decided that it would be very fitting if the tricolour was raised at the Cathedral and even better if they were able to secure a member of the military personnel to do it - so I was asked to do the job.”

Mr Keenan, who has been a member of the army reserve for over 40 years and is now based at Finner Camp in Co Donegal, said he had been to New York on numerous occasions to celebrate St Patrick’s Day there and had even marched in the parade a few times as well.

However, despite his wonderful memories and experiences there, this time has become very memorable indeed.

“The New York Parade was two fold this year - one aspect was the St Patrick’s Day Parade and the other was the 1916 Commemorations,” continued Mr Keenan, who also pointed out that history was also made during the Parade as the national flag was carried for the first time.

“It has been an unbelievable experience for me and it was a huge honour to be asked to raise the tricolour.

“I met so many fantastic people and it really was a wonderful occasion.”

Mr Keenan is the Company Commander of B Company in Co Donegal. After Connolly Barracks closed in Longford town he was transferred to Carrick-on-Shannon and then later went to Finner Camp.

He lives in Longford and the Longford Branch ONE is named after his father.