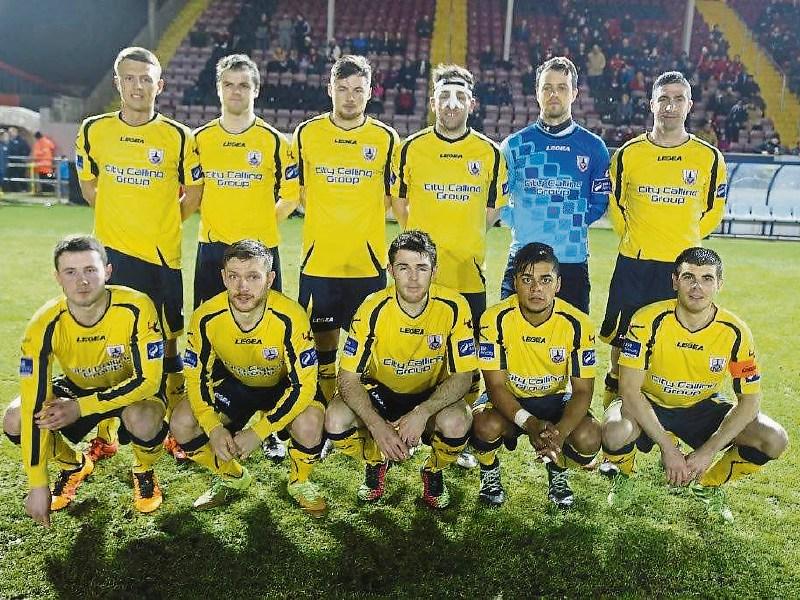 While Longford Town can rightly feel aggrieved that they got nothing from the first home Premier Division fixture of the 2016 season at City Calling Stadium on Friday night last, being the victims of some harsh decisions made by referee Jim McKell, they had a couple of great chances of breaking the deadlock in the first half.

A goal was definitely there for the taking when defender Noel Haverty got no real power behind his close range shot that was blocked by opposing centre-half Darren Dennehy as early as the 4th minute and there was another lucky escape for St Patrick’s Athletic when a strike from Kaleem Simon drifted narrowly wide of the post in the 22nd minute.

The alert Haverty almost capitalised on a mix-up in the visitors defence when knocking a header wide in the 6th minute but the Inchicore outfit, surprisingly beaten at home by Galway United the previous week, gradually got their act together and left-full Ian Birmingham went close with a well struck effort in the 31st minute.

Christy Fagan, operating as the lone striker for St Pat’s, was always a threat and almost scored in the 40th minute and then on the stroke of half-time Town keeper Paul Skinner did well to tip a deflected Billy Dennehy free-kick over the bar.

But the turning point of the game materialised in the 44th minute when Longford defender Conor Powell was sent-off after receiving a second yellow card for a silly challenge on Conan Byrne but the Town captain should never have been put in that position as he certainly did not deserve to be booked initially in the 23rd minute.

Referee McKell infuriated the home supporters among the official attendance of 725 with his general poor handling of the game and how he did not brand St Pat’s player Graham Kelly with at least a yellow card for a totally cynical tackle on Josh O’Hanlon in the 37th minute remains a mystery.

So Longford had to play the entire second half with ten men and to make matters worse midfield general Kevin O’Connor did not reappear for the second half, presumingly forced to retire injured!

It was always going to be a real tough uphill battle thereafter and after half-time Town substitute Danny O’Reilly blocked a goalbound attempt from Billy Dennehy, the St Pat’s pressure finally told when the dangerman Christy Fagan blasted the ball to the net from close range in the 65th minute.

Fagan latched on to a knock down in the box from Graham Kelly, who connected with a right wing cross from Conan Byrne, and St Pat’s went close to scoring a second goal in the 75th minute but were denied by Paul Skinner who made a fine save to keep out a low drive from Ian Birmingham.

At least that was some good news for Longford with experienced defender Pat Flynn brought on in the 80th minute after his lengthy injury absence from Airtricity League action while a most interesting introduction for St Pat’s in the early stages of the second half was former Republic of Ireland international Keith Treacy.

The Town, to their credit, kept plugging away in the face of adversity and after David O’Sullivan shot narrowly wide in the 87th minute there was another attempt for a dramatic last gasp equaliser deep into stoppage time when a strike from Josh O’Hanlon was deflected out for a corner that was subsequently gathered by St Pat’s keeper Brendan Clarke as the final whistle was blown.