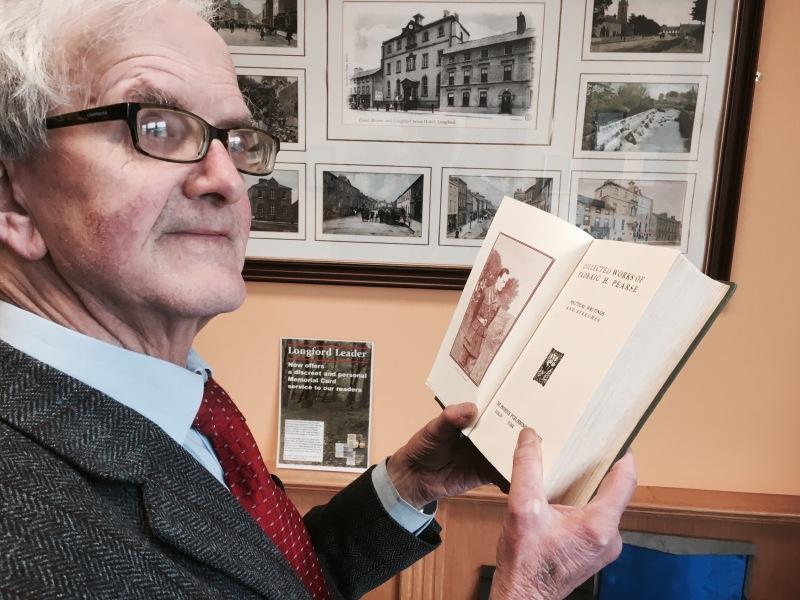 Local historian and author Jude Flynn is currently undertaking a series of visits to schools throughout County Longford in order to educate pupils about the literary works of 1916 Rising leader Padraig Pearse.

As part of the project, Jude is using a set of Pearse's collected works, which include a preface written in 1917 by one of the writer and poet's former students at St Enda's, Desmond Ryan.

“The books were given to me in 1967 by Kathleen Cooney from Killoe,” explained Jude, who is renowned throughout County Longford for his 'Fireside Tales' series of books.

“She worked in the post office and her sister was the girlfriend of Sean Connolly.”

Having visited schools elsewhere the county, Jude is bringing his mini tour of Pearse's works to an end in Longford town with stop-offs at Stonepark, St Joseph's, St Emer's, Melview, St John's, and St Michael's.

“I will be finishing the last of the schools just after Easter because the holidays are coming early this year,” he said, adding that the response so far has been very positive.

“The teachers have been very impressed and a few of the schools invited me to say a few words about Pearse,” he revealed.

“Teachers are welcome to photocopy the poems from them for their classes.”

After he has completed touring the schools with the books, Jude has plans to make them available for members of the public to access for research purposes.

“I'm going to present them to the County Library so that the people of Longford will be able to reference them,” he concluded.