Protestors fail to deter the crowds at Granard circus 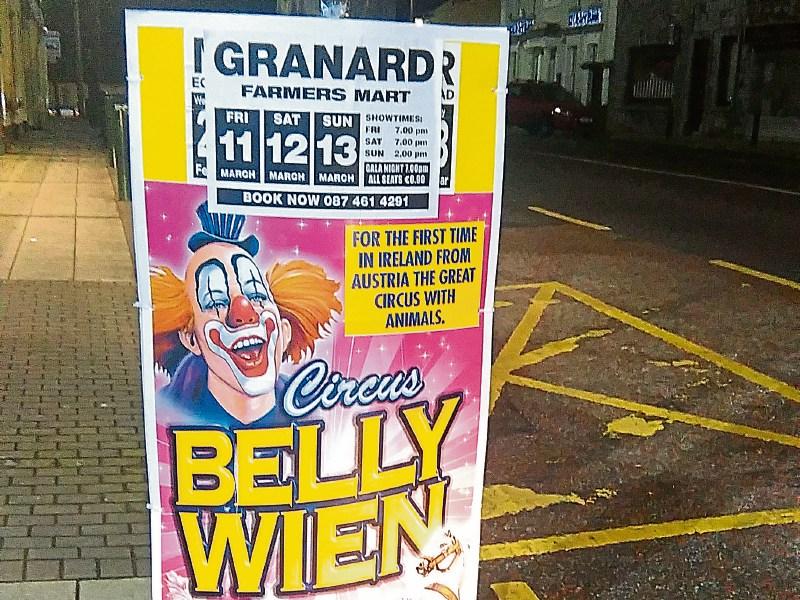 A controversial circus which had come under fire from animal rights protestors in Granard at the weekend appears to have been well received by the public.

'Circus Belly Wien’ arrived into the north Longford town last Wednesday ahead of a planned three day showcase on the grounds of Granard Mart.

Circus Watch Ireland called on the people in Granard to boycott the Dutch Circus Belly Wien/Renz.

In a statement, Circus Watch Ireland said that this circus, banned in its home country of Holland since September last year, has moved operations to Ireland with up to sixty animals in tow, including elephants and giraffes.

There were concerns too from the management of Granard Mart.

A contract between both parties had been signed in the lead up to last week's planned shows.

However, that agreement was thrown into doubt last Wednesday when a stand off between circus representatives and Granard Mart officials resulted in the gardaí having to be called.

While Gardaí confirmed they attended the scene, a Garda spokesperson told the Longford Leader that no public order incidents were reported and no investigation has been launched.

Speaking to the Leader in the aftermath of those events as Circus organisers prepared to pull out of town, Mart manager Charlotte Kearney said she just wanted to draw line under the controversy.

“We had big question marks over their (circus) insurance certificate,” she said.

“The shows were for the 11th, 12th and 13th (March) but they (circus) pulled into the yard on March 9 when a sale was just over and cattle trucks were still in the yard,” she said.

Ms Kearney however, conceded the circus seemed to have gone down well with locals.

“They (circus) did get a certain amount of support and it did look like it was well supported on Saturday and Sunday evening though there were a few protestors there on Friday night,” she said.

“It did go down well and there was a good crowd in to see it.”

Cllr Reilly also said any fears over animal cruelty were alleviated over the course of the weekend.

“As far as I am concerned and from the reports I have heard back, it was quite successful.

“Fodder and silage was delivered as soon as they (circus) arrived while bedding and straw was also provided,” he added.

However, animal rights activists continued to call on local people to boycott the three day spectacle.

It is believed that the circus has now left the area.