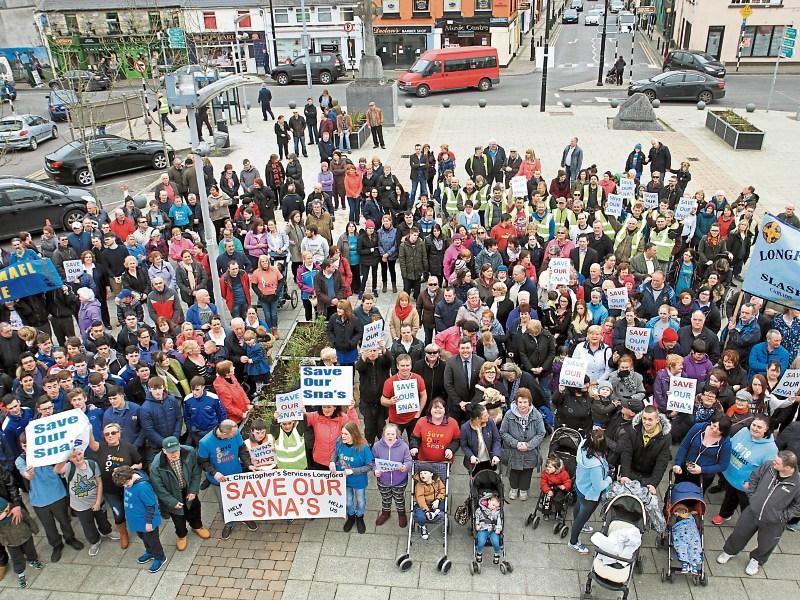 Traffic was brought to a standstill in Longford town last Thursday as more than 300 demonstrators vented their ire at cuts to the number of special needs assistants at St Christopher’s Special National School.

Parents and service users were joined by local politicians and members of the public for the lunchtime protest which started from the facility’s Battery Road headquarters and ended at the town’s Market Square.

A number of demonstrators could be seen brandishing placards carrying the slogan ‘Save our SNAs’ while others sported t-shirts in opposition to the decision.

The protest is a result of a decision by the National Council for Special Education (NCSE) to cut the the School’s SNA posts from 14 to 12. The decision was announced last October.

An organiser of the rally, David Carrig said his 14-year-old son Brandon was one of many service users that were likely to be affected by the decision.

“People don’t realise that the services and the school are two different bodies,” he said.

“My own lad goes here. He is non verbal, has autism, ADHD and he has seizures on top of that but since they cut these SNAs it is very dangerous for him. He needs two assistants, not one.”

Mr Carrig said prior to last October’s announcement, parents had in fact been hoping to increase the school’s present compliment of SNAs.

“They (staff) are pretty stretched. Every day is a different day in St Christopher’s, you could have a calm day and then you can have a day where there is meltdown.”

Attempts to reverse the reduction have so far fallen on deaf ears despite an appeal made by the school’s board of management.

Mr Carrig said it was hoped Thursday afternoon’s protest could go a long way towards strengthening those overtures as the Dail returns from General Election 2016.

“The appeal has failed but we are hoping this (protest) will make a difference,” he added.

“This is a health and safety issue because if you haven’t the correct staff the school is undermanned and can’t look after all those that it should be looking after.”

She said her brother in law, Paul has been an almost permanent fixture at the school for the past four decades .

“He has been coming here for the last 40 years and while the cuts won’t affect him as much as the younger crowd this doesn’t help the school at all.”

They were sentiments supported by fellow demonstrator Maggie Grogan.

“It’s a wonderful facility here in the town and if it’s let go it will be an absolute disgrace.

“There should be an awful lot more people here today to support what’s going on.

“With the help of God it will be overturned. We can’t let this happen.

“We can’t let the facilities here be affected. It affects everbody in the town in some way or another.”

At the Market Square, Ann O'Leary thanked people for taking part while Cllr Gerry Warnock and parent Natasha Kelly spoke out against the SNA cuts.