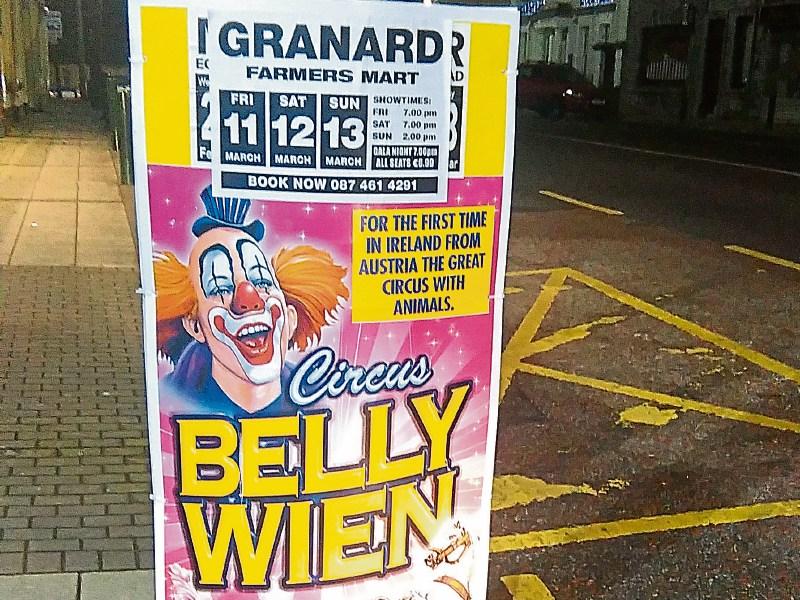 Animal rights activists are to stage a protest in Granard this weekend against the staging of a hotly contested elephant circus.

‘Circus Belly Wien’ arrived into the north Longford town last night (Wednesday) ahead of a planned three day showcase on the grounds of Granard Mart.

News of its arrival has, however, been met with heightened scepticism from animal welfare proponents.

Much of that derision has centred on the nationwide bans that have been directed against the circus for its usage of wild animals during its shows.

Just last week, a crowd of around 60 demonstrators held a protest at the Virginia Showgrounds in Cavan ahead of a planned show.

However, a statement which was later released by the Virginia Showgrounds management committee said they were more than “satisfied” with Circus Belly Wien after carrying out an inspection of the group’s holdings.

“This circus was very professional and offered every care possible to the welfare of their animals,” the statement read.

It’s understood an agreement between Granard Mart and officials activing for ‘Circus Belly Wien’ had been signed in the lead up to this weekend’s planned three day event.

The Leader, however, has learned representatives acting on behalf of the Mart attempted to cancel that arrangement in recent days as negative media publicity over the circus intensified.

That led to a brief stand-off yesterday (Wednesday) evening, resulting in gardai attending the scene.

A Garda spokesperson has since confirmed no public order incidents were reported and no investigation has been launched.

However, a spokesman for Animal Rights Action Network (ARAN) called on local people to boycott this weekend’s three day event.

“They (Circus Belly Wien) seem to be constantly on the run,” said the spokesman.

“When Marts or GAA grounds agree to these things, they soon realise it’s a bad deal when they see how controversial they are.

“We are asking people to go elsewhere this weekend.

“There is no way we (ARAN) are going to let them into Granard, Longford or anywhere else without some form of visible presence.”

At the time of writing, attempts to make contact with spokespersons from both Granard Mart and ‘Circus Belly Wien’ were unsuccessful.