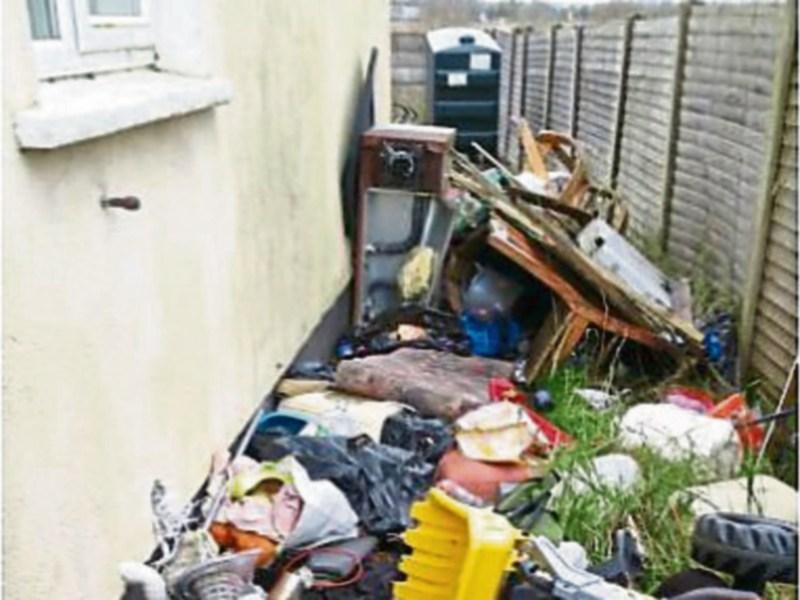 The assessment of the estate, which was carried out by Paul Rooney of Advanced Safety and Training Solutions in Co Meath last December said there were “some serious Health & Safety concerns regarding a number of the properties” at the estate which is located just off the Athlone Road outside Longford town.

Speaking to the Longford Leader this week, Paddy Duffy of the Gleann Riada Residents’ Association said that residents have “heard a lot of rhetoric or talk” in relation to the problems on the estate but have seen very little action.

He outlined the misery of many residents who are now living on an estate where approximately 30 of the 80 properties are either “vacant, vandalised or derelict.”

“We’ve dealt with many people over the years to try and turn things around,” Paddy Duffy explained. At the last meeting involving councillors, residents once again heard promises to deal with the issues at the estate but were left frustrated.

“We’ve set out clearly what needs to be done, we need the local authority to take action,” Mr Duffy explained.

Residents want the council to make all the vandalised and vacant properties safe on the estate. They also want the owners, including banks and receivers, of the derelict properties to be identified and dealt with.

Rubbish, vermin and cracked footpaths are among the health and safety concerns raised in the comprehensive report.

A glimpse at the report from Advanced Safety and Training Solutions identifies a litany of issues at the estate.

Referring to two particularly houses, assessor Paul Rooney stated: “The porch over the front doors of these houses is falling down; there are vicious dogs living in one of the houses and there is a major build-up of rubbish inside and outside these dwellings.

“There are rats living in the rubbish outside; I noticed one rat but could not get a picture of it.

“There is evidence of slippage of the building as shown in the enclosed pictures.

“These two derelict dwellings constitute a major health and safety concern for the neighbours and children in this estate.”

According to Paddy Duffy of the Residents’ Association, only two of the apartments in the apartment block are occupied.

The report on the area surrounding the apartment block identified “severe evidence of movement of the ground or the building.”

“This represents a serious risk to the health and safety of children in this estate.”

The engineer also identified serious issues at a listed number of houses in Gleann Riada.

“All of those dwellings are in a total state of disrepair - gutters are falling down, there is rubbish everywhere, windows are damaged, there are signs of slippage and there is vermin infestation.

“This estate is neglected and is in need of maintenance and repair before a serious health and safety incident occurs,” the engineer continued.

“It constitutes not only a health and safety risk - the values of the properties are much lower than they should be because of the state of disrepair of these houses.”

Meanwhile, Paddy Duffy told the Leader that despite promises made, and assurances given by Longford County Council and local politicians that these problems would be addressed, little or no action has been taken.

He did however pay tribute to Deputy Gab McFadden who he said had been in contact with the residents’ committee on a number of occasions. However, the problems at the estate persist.

“As previously highlighted, the most urgent and pressing matter to be dealt with in this estate is the dire situation with regards to the number of vacant, derelict and vandalised properties,” Mr Duffy told the Leader. “A number of these pose a very serious health and safety risk to other residents.”

He went on to say that health and safety concerns had been confirmed in the recent report and Gleann Riada Residents Association had commissioned the independent report because of its concerns in relation to the well-being of residents and those visiting the estate.

“The report clearly indicates that urgent action needs to be taken before someone is seriously injured or requires medical attention.”

A spokesperson for the County Council said this week that the council was hoping to contact the residents' association in order to see how the issues could be addressed. The council could not respond to the specific issues raised in the health and safety report at this time.