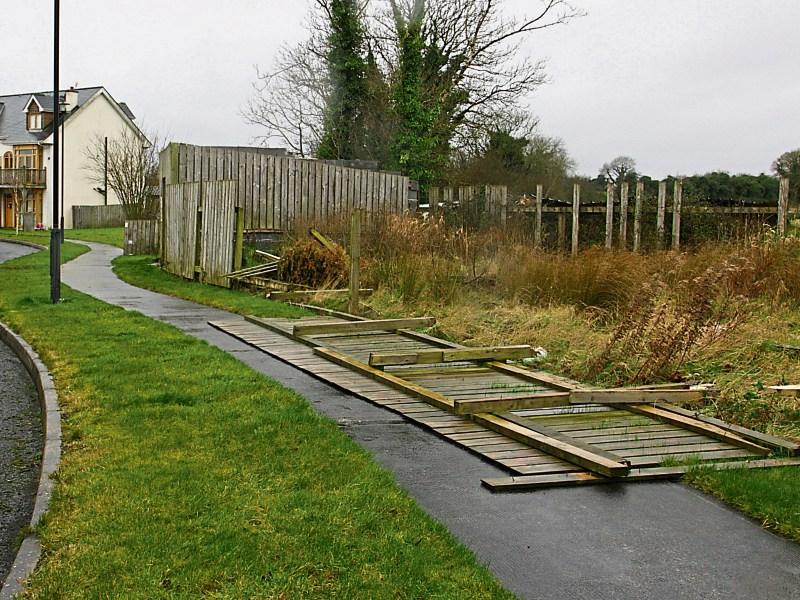 A local resident has described the carnage that took place in Tarmonbarry at the weekend, after what she described as a 'mini-tornado' hit the area at approximately 1.30pm on Saturday.

Orlagh McGrane's car and home sustained damage in the incident, which is reported to have lasted for less than two minutes.

“I live on the Marina. I was after taking the baby up from her nap and I just happened to look out the window and it was like nothing I had ever seen before,” Orlagh recalled, adding that the roof of the new bin store had been completely blown off, while her own roof lost many slates, which were embedded in her garden. It was further reported that trees and bushes were bent down towards the ground, while even street lighting was swaying.

Falling debris also caused substantial damage to Orlagh's car, and she explained; “When whatever it was landed on top of my car, the lights on the inside of the car were knocked out.

“They're hanging on there by the wires.

“There's extensive damage to the roof, bonnet and the bumper,” said Orlagh, later adding “we actually have two cars, luckily one of them was out on the road.”

Having witnessed a mini-tornado on a trip to America, Orlagh agreed that it was the best way of describing the events of last Saturday afternoon.

She marveled, however, in the fact that their neighbours across the way were not affected by the event.

“Even the houses across from us weren't affected,” she revealed.

This fact was backed up by site developer and former Cllr Tom Crosby, who described it as a 'freak incident'.

Alerted to the situation by frightened residents, Tom stated; “It seemingly just went up one corridor, it only affected the western side of the Marina.”

He also recalled how one resident likened the noise of the mini-tornado to that of a jet landing nearby.

Adding that the Met Office had been in touch with him regarding the event, Tom concluded by expressing his relief that nobody was hurt, despite the fact that it's a popular area for visitors.

“As the developer, I'd certainly be so grateful that none of the residents were hurt or injured. It was really miraculous that they weren't.”