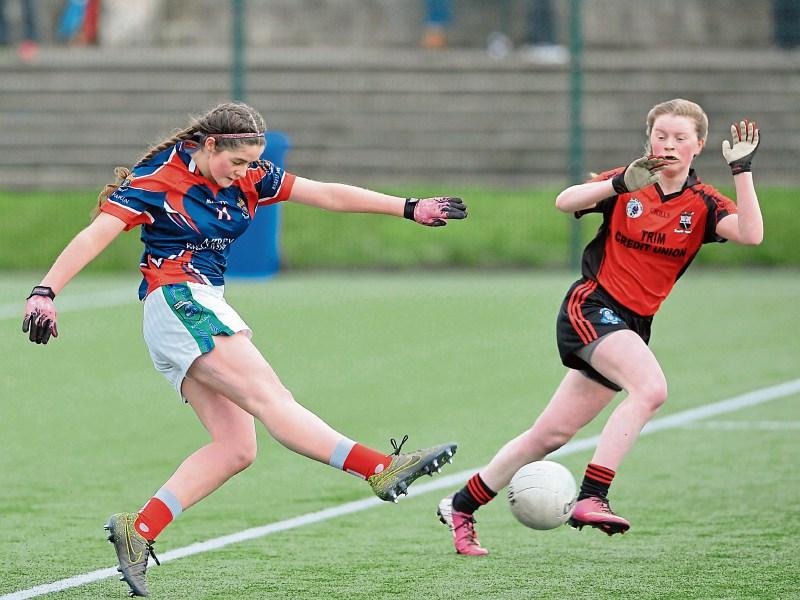 Skilful Sarah contributed a very impressive 3-3 and she was a vital cog in Ballymahon’s well-oiled attacking armoury where Ciara Healy and Ciara Fox also starred in the central attacking positions, tallying 0-6 between them.

Little separated the sides during a lively opening half. They were deadlocked twice and after 21 minutes, Ballymahon, coached by Sean Bohan and Niamh Egan, were ahead by just the minimum margin, 2-3 to 1-5.

With team captain Aisling McCormack, Katie Smyth (the corner forward who was deployed as an extra midfielder) and half backs Sarah Hogan and Roisin Leen to the fore around the central diamond, Ballymahon registered an unanswered 1-3 before half time and this blitz effectively wrapped up glory.

Seven points down, 1-5 to 3-6, the odds were stacked against Trim and while they battled spiritedly they were unable to break Ballymahon’s stranglehold on proceedings.

The Ballymahon girls, cheered on by their vocal supporters, duly outscored their opponents by 1-4 to 0-2 in the second half and they’ve now got an All-Ireland semi-final to look forward to, a game that is provisionally fixed for February 17 next.

Clodagh Dillon and Caoimhe Lohan performed excellently in the Ballymahon full back line and a highlight of the game was their ability to execute the block down. Indeed, Ballymahon were very well drilled. Their off-the-ball running was purposeful and their inter-change play and passing was very accurate.

There was great pace to the opening exchanges and with 11 minutes elapsed the sides were level, 1-2 apiece. Caroline McLoughlin-Quinn found the net for Trim, with Leah Dennehy and Leah Devine (free) adding the points. Ciara Healy kicked two fine points for Ballymahon and Clodagh Lohan confidently side-footed home the goal.

On the quarter hour mark, Sarah Dillon took centre stage, scoring 1-1 inside 90 seconds and giving Ballymahon a 2-3 to 1-2 lead. Trim responded with three points on the bounce per Dennehy, Sophie Payne and Sarah Lynch.

Trim ‘keeper Aoife Murray had to be alert to deny Ciara Healy a goal but Ballymahon were gathering momentum and from the 25th to 30th minutes they racked up 1-3. Dillon, again notched 1-1 during this spell, with Roisin Leen and Ciara Foxe also finding the target. Half-time: Ballymahon 3-6 Trim 1-5.

On the resumption, Ballymahon added two points through Ciara Foxe and Ciara Healy. Trim replied with points from Leah Devine and Leah Dennehy, 3-8 to 1-7 with 48 minutes played.

The Meath school failed to score again as fitter and stronger Ballymahon, who amassed nine wides to Trim’s four, put the icing on the cake with further scores from Ciara Healy and star performer Sarah Dillon (1-1).