Failure to score in 2nd half costs Longford dearly 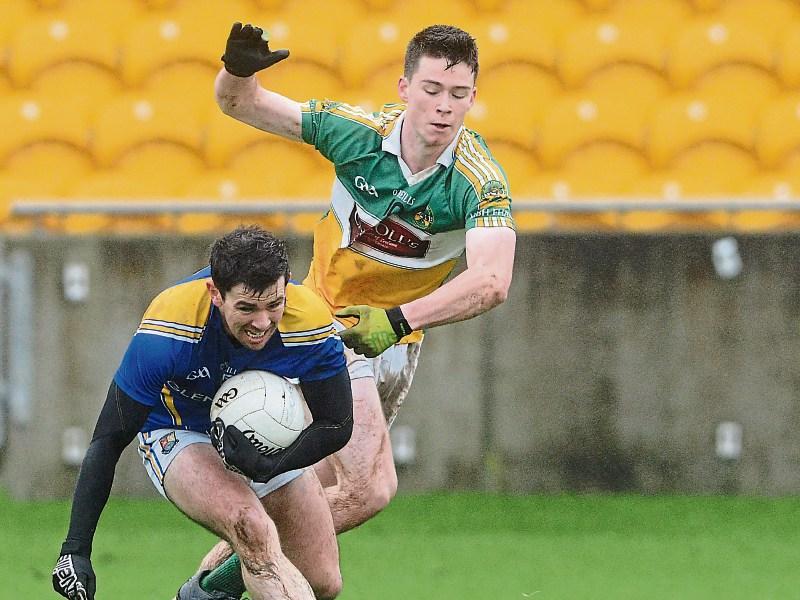 With the strong wind and heavy cascading rain at their backs during the first half, Denis Connerton’s Longford enjoyed a 0-10 to 0-7 interval cushion.

However, just as they did when losing to Westmeath during the O’Byrne Cup recently, Longford, despite a gut wrenching effort, failed to raise a flag during the concluding thirty-five plus minutes and Offaly duly capitalised as they went on to record their first win over Longford in eight group league games since the 1973/’74 season.

Longford’s cause wasn’t helped by their inability to keep the scoreboard ticking over and also by some very dubious officiating, particularly when tension was at its highest and matters were in the melting pot.

With Longford trailing by the minimum, 0-11 to 0-10, Offaly ‘keeper Alan Mulhall, after he denied Barry Gilleran a goal, appeared to touch the ball on the ground outside his ‘small square’ in the 67th minute.

But rather than award Longford the 13m free they were entitled to, referee Fergal Barry, following consultation with his umpires, opted to throw up the ball on the 21m line. If Longford had equalised at that stage, perhaps they might have snatched victory?

While three minutes later, Michael Quinn made up serious yards to execute a perfectly timed dispossession tackle on Sean Pender but was incorrectly penalised and Offaly sub Sean Doyle dispatched the insurance point from the free.

To compound Longford’s and Quinn’s misery, the captain was shown a straight red card in injury time after he clashed with Offaly’s Ruairí McNamee, who himself was black carded.

Quinn will be suspended for next Sunday’s crucial game against Limerick and with ‘The Treaty’ men drawing with Tipperary in round one, they won’t fear Longford.

The save from Gilleran was Longford’s third decent goal opportunity but with the benefit of hindsight perhaps the better option in the lead-up would have been for sub Paul McKeon to have taken a fisted point himself as opposed to laying off the ball to Gilleran as the angles were tightening all the time.

Deep in first half injury time, James McGivney drilled a thumping strike off the butt of the upright with Mulhall well and truly beaten.

And in the 47th minute, with the scores tied at 0-10 apiece, the ‘Faithful’ custodian earned his crust by saving from Liam Connerton with his feet.

Longford also failed to convert 80% of the goal chances they created during their O’Byrne Cup Final defeat against Meath the previous week and it is something they’ll need to rectify. If not, there’ll be more hard luck stories.

Into the teeth of the wind, second half frees by Francis McGee and Paul McKeon fell short of the target but the harsh truth is that considering the strength of the elements, Longford needed to be significantly further ahead at half time.

Offaly too were guilty of spurning scoring opportunities. With them leading 0-4 to 0-3, Anton Sullivan blazed an 18th minute penalty past Paddy Collum’s left hand post and inches wide. That miss was the closest Offaly came to netting a goal and it was also the catalyst for Longford to register four unanswered points and go 0-7 to 0-3 in front by the 26th minute.

Three points inside two minutes helped Offaly gain parity for the fourth occasion and it was this progress against the elements - against the wind Offaly plundered seven points, Longford scored none against the wind - that gave the home side the overall edge.

With Longford hanging on grimly, Offaly kicked eight second half wides, all of them by the 59th minute, and if they had taken a small portion of these the visitors would have found themselves in deeper trouble.

Indeed, on an energy sapping pitch and in horrible weather, Longford legs looked heavy at times and their arduous January schedule - six games inside 29 days - and a seventh to follow next Sunday, obviously took their toll.

The challenge for them now is to push that physical and mental fatigue aside and focus on getting a win over Limerick. Diarmuid Masterson, who was serving a one-game suspension carried over from last year, and Darren Gallagher (injured), will be available for selection.

With Longford and Offaly due to clash for a seventh time since March 2014 in the Leinster Championship on May 15 next, the psychological edge, for the moment at least, rests with Pat Flanagan’s men. But as Longford demonstrated last year, the league form guide can be turned on its head in the championship.

Points by Barry McKeon, Francis McGee (free) and Michael Quinn provided Longford with a 0-3 to 0-1 lead with 8 minutes elapsed. An Offaly scoring burst yielded three points in as many minutes from Bernard Allen (2) and Niall McNamee.

Longford defender Fergal Battrim was judged to have brought down Conor McNamee and Anton Sullivan missed the penalty. Points from McKeon (2 frees), along with McGee and Quinn (both quality long range scores from close to 50m out), helped Longford go 0-7 to 0-4 ahead by the 26th minute.

Offaly, again, enjoyed a purple patch. Graham Guilfoyle, Allen and defender Niall Darby, with his fist, grabbed points in a two minute spell to level proceedings for the 4th time, 0-7 all after 28 minutes.

The closing minutes of the opening half were dominated by Longford. McKeon (2) and Andrew Dalton slotted over points, but to Longford’s dismay McGivney’s injury time strike rebounded to safety off the upright and a few minutes earlier, Offaly ‘keeper Mulhall had a bit of luck as he pushed a probing McGee shot, that gathered momentum in the wind, onto the crossbar.

By the 46th minute Offaly, who trailed 0-7 to 0-10, at the break, had equalised for the fifth and final time. Guilfoyle, Niall McNamee and Allen landed the points.

Eleven scoreless minutes followed but they weren’t lacking incident. Liam Connerton was denied a goal, while Nigel Dunne and McNamee (3) were off target for Offaly. McGee dropped a Longford free short and as sub Rory Connor was dispossessed, Offaly quickly counter attacked and Allen gave them the lead, 0-11 to 0-10.

Longford, in fairness, threw all they had at Offaly. McGee and sub Paul McKeon were unlucky with frees and then there was the frustration of the Gilleran goal chance and ‘free’ that wasn’t awarded. Sub Sean Doyle landed a late Offaly free and in injury time, rubbing salt into Longford wounds, a red card was flashed at Quinn.