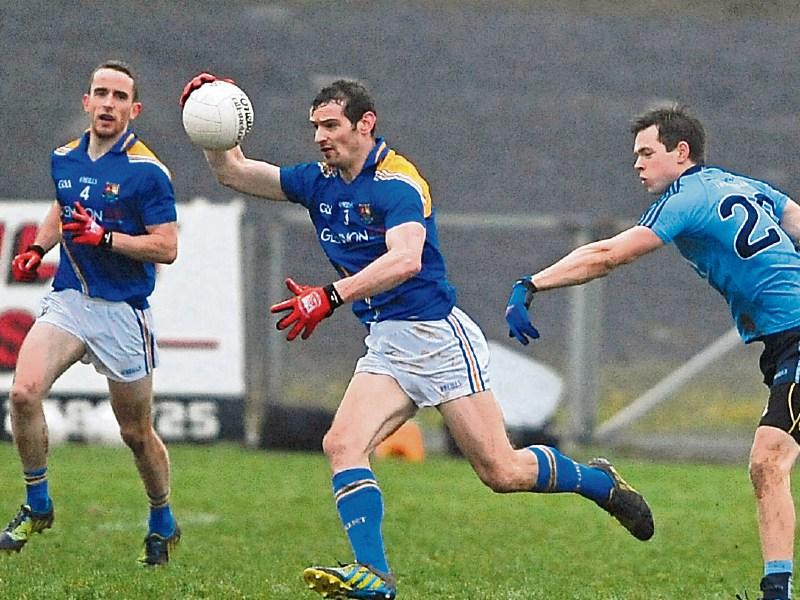 Showing great courage and a high level of intensity throughout the game played in difficult underfoot conditions, Longford produced a tremendous team performance to take Dublin down in a tough battle at Glennon Brothers Pearse Park on Sunday last.

And while the reward is another competitive fixture against Meath in the O’Byrne Cup senior football final at Pairc Tailteann in Navan on Sunday next (throw-in 2.30pm), the chance of winning a title is bonus territory for Denis Connerton’s side and nobody is getting carried away.

Consolidating Division 3 status in the National League is clearly the main objective but the extended run in the O’Byrne Cup is a big lift for all the players on the panel as Longford bid to win the early season Leinster competition for the first time since 2000.

Confidence is increasing and momentum is building as the county savour in the joy of beating Dublin, much to the sheer delight of the home supporters among the estimated 2,000 attendance who watched their side rattle a rusty Dublin outfit just a couple of weeks back in training.

Beating Dublin is a very significant achievement, no matter what competition it is, and for most of the match the sluggish All-Ireland champions were unable to match the fierce commitment of the Longford men who were full value for their eventual six points winning margin.

Make no mistake about it, the illustrious opposition were second best on this occasion even though they did succeed in closing the gap to the minimum of margins (0-9 to 0-8) after Ciaran Reddin shot over the bar in the 51st minute.

Indeed, Dublin were unlucky not to level matters when a Dean Rock free hit the upright soon after but they failed to register another score until Reddin was on the mark again a couple of minutes into stoppage time.

In between, Longford enjoyed a new lease of life to clock up 1-3 in a row and were in no mood to let a big victory slip from their grasp. Substitute Paul McKeon eased the pressure with a very vital point in the 60th minute and his brother Barry then converted a free before Dublin created the chance of the equalising goal.

But Paddy Andrews shot was blocked and the danger was cleared. In the immediate counter-attack the impeded Michael Brady (who had a powerful game) broke the ball down from a Francis McGee centre to leave substitute Liam Connerton with a glorious opportunity of finding the back of the net and the son of the manager hit the target in the 64th minute.

The only goal in the game proved to be the killer blow and just for good measure Francis McGee (a constant threat to the Dublin defence) landed a brilliant point in the 69th minute to cap a fine performance. But every member of the team played their part in this great victory and hopefully Longford can now go on to complete the job against Meath, one point winners over Louth in the other semi-final in Drogheda.

Dublin battled it out to the bitter end, with Ciaran Reddin kicking a point and he then flicked the ball against the post on the stroke of the final whistle. But Longford wanted the win a lot more and richly deserved to reach the O’Byrne Cup title decider that they last contested in 2008 when they were so unfortunate to lose by a point against the Dubs at Parnell Park.

Longford (minus the unavailable Brian Kavanagh) got off to a bright start with cracking points from Francis McGee and Mark Hughes and further scores followed from McGee (free), Brian Farrell (bursting through to shoot over the bar), James McGivney (another great effort) and Robbie Smyth (free) to leave the home side leading by 0-6 to 0-3 with 22 minutes gone on the clock.

Darren Daly, Paddy Andrews and Tomas Brady were on target for Dublin and their fourth point in the 27th minute was a brilliant strike from Cormac Costello. But Longford had the last say in the first half with a terrific score from a Robbie Smyth long range free in the second minute of stoppage time to lead by 0-7 to 0-4 at the break.

Both sides were guilty of kicking a few wides and with Dublin struggling to assert a serious threat the game was there for the taking.

Longford extended their advantage when Robbie Smyth fired over a free in front of the posts with four minutes gone on the changeover but back came the All-Ireland champions to close the gap with a brace of points from Dean Rock (play and free).

Then came a truly inspirational score from the boot of Darren Gallagher, who landed a magnificent long range effort in the 47th minute after collecting a short free from Francis McGee.

Gallagher’s workrate was immense, a trademark of this gutsy Longford team, but Dublin battled back with a point apiece from Dean Rock (free) and Ciaran Reddin in quick succession to leave just a solitary score between the sides.

At that stage it looked like Longford were slipping but they gradually regained the upper hand to emerge victorious in the finish with Liam Connerton getting the decisive goal to clinch a wonderful win.

And a very pleasing aspect of the fine performance was that no less than nine different players got their names on the scoresheet for the mighty midlanders.