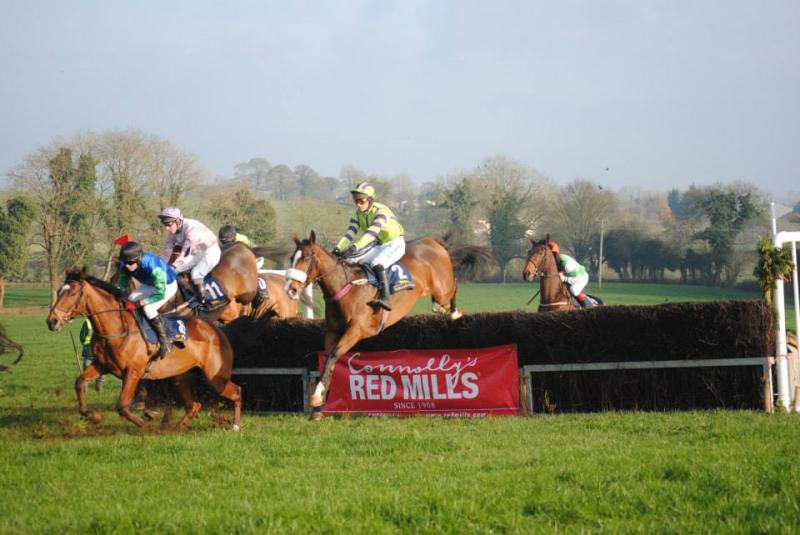 After a three year break, due to bad weather and Covid-19, Ballinalee was, once again, the centre of attention with the staging of the annual Longford Westmeath Point to Point race meeting at Corbeagh House.

2021 has been a very challenging year for point to point racing with many being impacted by weather and the availability of insurance for such events.

The McGreal family, who own the venue, worked with a small and dedicated team of volunteers, including members of the local Longford Harriers, to get the track ready in advance of the event.

The Turf Club inspected the course on Friday and deemed the going as Yielding, Soft in places – ideal for racing.

With the largest entry ever, 132 entries, a decision was made to bring the start time back to 11:30am. Final checks were made on Sunday morning, December 5 to make sure all was ready and in place for the final inspection. Happily, the Turf Club inspection was positive and it was ‘all systems go’ for the first race.

At these fixtures six races are scheduled to be run, based mainly on the age of the horse. For example, 4 year old maiden race.  These maiden races are viewed as a nursery for future National Hunt racehorses.  The Open Lightweight race is open to most horses and is generally contested by horses that have already made a name for themselves on the racecourse.  These horses then go on to run in Hunter Chases at Punchestown, Cheltenham and Aintree.

Corbeagh House is a dairy farm which is adapted to form a racecourse for the day and returns to its agricultural status once the day is over.  The track at Corbeagh is a perfect oval of one mile with five National Hunt fences and horses complete three circuits in every race.  Each race was run over three miles with 16 fences to be negotiated.  The location is a natural amphitheatre which means that spectators have a bird’s eye view and can get close to all the action.

On the day we had 68 runners, owned by individuals and syndicates who subscribe to 33 various hunts in 20 different counties.  52 trainers were represented and 31 amateur jockeys took part.  Horses travelled from north, south, east and west and as far away as Antrim and Cork.  Over €10,000 was awarded in prize money.  In the sixth race for 6 year olds and upwards, the Irish National Hunt Steeplechase Committee generously sponsored a bonus of €1,000 to the winning owner.

There was great demand for the first race, the Tattersalls NH 4 year old Maiden.  Many of these young horses were competing for a place in the Cheltenham sales.  Due to the large number of entries in the first race, it had to be divided.  In the first division, in what was a steadily run race the favourite So Scottish and Faulty quickened notably turning into the home straight and pulled clear only for Faulty to fall two out when disputing.  This left the So Scottish clear for Emmet Mullins and continued the rich vein of form for jockey Eoin O'Brien.  In the second division, Kalanisi Star made the long journey from Dungourney in Cork for the Ahern family worthwhile when winning under Johnny Barry.  Travelling well into business end, he led from two out to score.  Kalanisi Star was offered for sale at the Tattersalls Cheltenham December Sale, making Stg£65,000.

Sean Powell, John McGuinness & Paul Fay Bookmaker 5yo Geldings Maiden was the second race on the card.  In a strongly run race, newcomer Hot Rod Lincoln made all the running under Ben Harvey to provide wife and husband team of Riceal and Larry Dunne from Enniskerry in Wicklow who also bred the winner with a first success.  The winner had his rivals well strung out here.  He is another who headed to the Tattersalls Cheltenham December Sale achieving Stg£78,000.

The Irish Netting & Reilly Structural Ltd 6yo+ Mares Maiden saw Smiths Girl gets off the mark on her third start between the flags for her Fairyhouse based handler.  Placed previously at Castletown-Geoghegan and Tattersalls already this term, Smiths Girl asserted before two out and may now be seen on the track over the Christmas period.  This was also the second win on the day for jockey Ben Harvey.

The fourth race, Connollys Red Mills & The Sportsmans Inn Winner Of Three, saw odd on favourite Ask D'Man record his fourth win between the flags and in doing so brings up a first career treble for Ben Harvey.  The recent Portrush winner made all the running and may now be targeted at a Clonmel Hunters Chase in the spring according to the winning handler.

Last Mays Necarne winner Kates Hill makes her start in open company a winning one under Noel McParlan in the Quinns of Edgeworthstown Mares Open.  Pulling clear with the runner-up in the straight, the close relation to the Smyths family’s Tammys Hill, will now most likely contest a Thurles mares bumper in a couple of weeks’ time.

Rawles & The INHSC 6yo+ Maiden saw 13 going to post.  Having pulled up on his debut at Tralee last May, No More Lockdown stepped up well here to score at the second time of asking for Carlow owner and breeder Arthur McDonald and jockey Pa King.  Winning handler Willie Murphy will discuss the win with the owners before making any future plans.

On a beautiful winter’s day, Christopher Whyte and Liam Dillon, both members of the Longford Harriers, provided an added spectacle for the occasion.  They, with their trusted hunting horses, acted as mounted stewards for the day.  Their job was to catch any loose horses on the track.  Thankfully they weren’t too busy.

With bookmakers in attendance and a live commentary on each race, a great atmosphere prevailed on the day.  Horseracing Ireland contribute a grant towards the staging of the event and without this support, Point to Point racing would not happen.  The local community again rose to the occasion with sponsors from Longford, Ballinalee and Edgeworthstown.  The Committee would like to acknowledge all the businesses that provided sponsorship and these were recognised in the published race card.

The comments from owners, trainers and jockeys were very positive.  The Turf Club complimented the committee on a well organised and excellent event.  The Committee would like to thank all those who worked tirelessly in preparing the venue, coordinating all the activities on the day and everyone who supported us on the day.

At the Tattersalls Cheltenham December Sale on December 10, six of Sunday’s runners found new homes.  In total they made almost €425,000 (Stg£362,000).  Hawaii Du Mestivel, third in Division 2 of the Tattersalls NH 4 year old Maiden made Stg£100k.  We wish them luck in their future careers.