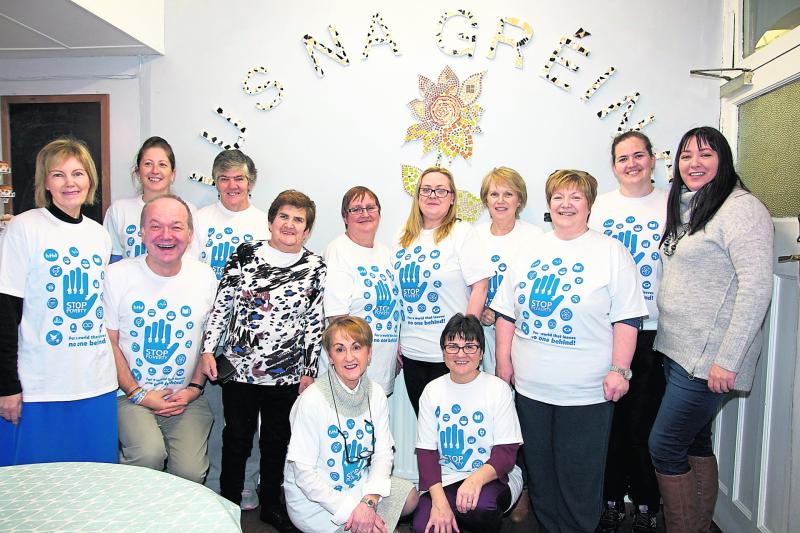 Due to Storm Ophelia, the UN Eradication of Poverty Awareness Day event was postponed in Granard from October 17 until Tuesday, November 7.

Storms come and go but as evidenced by the testimony from speakers at the event in Lus Gréine FRC, the web of poverty can last a lifetime for many unfortunate populations.

Pierre Klein from the organisation ‘All Together in Dignity’ noted that this year marks the 30th anniversary of the Call to Action by Father Joseph Wresinski - which inspired the observance of October 17 as the World Day for Overcoming Extreme Poverty - and the recognition by the United Nations of the day as the International Day for the Eradication of Poverty.

He pointed to the fundamental need to ensure that the UN’s top eight millennium goals which address issues such as childhood wellbeing, maternal health, the right to female education and tackling global warming are actioned.

Guest speaker at the event Longford woman, Tess Murphy spoke about key issues which plunge families into crisis and poverty such as domestic violence and homelessness.

She referenced the work of Longford Women’s Link who this year alone has supported nearly 300 women experiencing domestic violence.

Tess also spoke about the very important work carried out by Midlands Simon in supporting many young people and families in getting accommodation and maintaining their tenancies.

The event at the busy Family Resource Centre in Granard was truly collaborative with organisations such as Ardscoil Phádraig, Granard Area Action Group, Granard Library, Granard Community Garda and local businesses working together with a host of volunteers and supporters to highlight the unacceptable consequences of poverty.

Ms Mary Cooney Art Teacher with Ard Scoil Padraig complimented her First Year students on their Art Installation which was on display as very evocative and unique.

Granard Art Club launched their own Art sculpture which depicts very visually the web of poverty. Speaking on their behalf Dee Butt said the installation visually demonstrated the negative dominance of power and control in keeping communities and individuals locked into the poverty cycle. She urged people against complacency in accepting the status quo where poverty is concerned.

Bernadette Fagan speaking on behalf of the Voluntary Management Committee and staff of the FRC thanked the Department of Employment Affairs and Social Protection for their support, ATD, their collaborative partners, volunteers and the whole community of Granard and North Longford.

Katie McGovern from Sacred Heart National School, Granard entertained the guests with a lovely rendition of ‘Something So Strong’ and other musical delights.