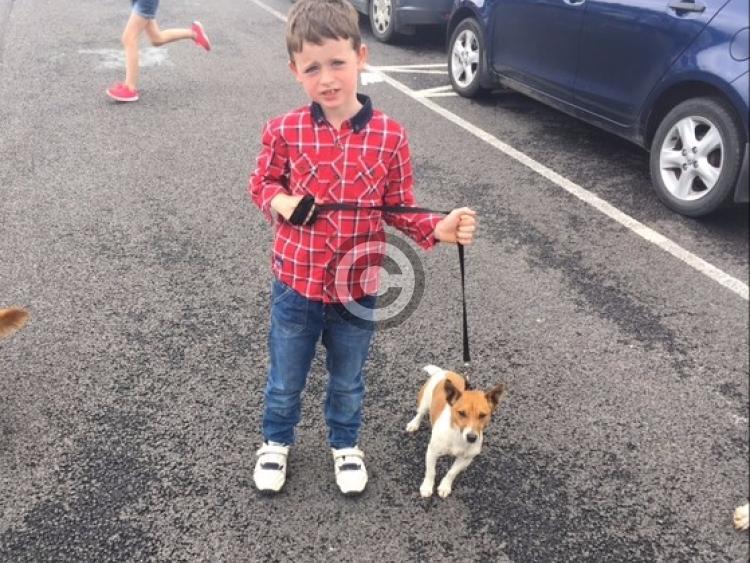 Getting ready for the very popular dog show

They came from all over the country to last Saturday’s Granard Agricultural Show which took place at Higginstown Park on the outskirts of the town.

he rain held off for the best part of the day and while the sky remained cloudy for the most part, rays of sunshine did burst through as the crowds descended on the north Longford town throughout the day.
Breeders proudly displayed their pedigree animals and competition reached fever pitch in the show jumping stakes.
There was lots of entertainment too, for all the children, and organisers pointed out that entries in the dog show were up on last year.
The high standard in the children’s arts section was evident from early on in the day and organiser of this particular section, Rosemary Gaynor alluded to the fact that entries in all classes were well up on last year.
Judges, she added, had been inundated with some of the best talent in Co Longford at last weekend’s show, while winners on the day included Aughnagarron NS; Sacred Heart NS, Granard; Lismacaffrey NS.
Ms Gaynor's sentiments also ring true in the home baking and arts and crafts sections where some of the most mouth watering cakes, buns and breads were on display.
Meanwhile, chairman Gerry Tully said the event had gone very well and organisers were delighted with how things turned out last Saturday. “We are delighted with how well things are going here today,” Mr Tully told the Leader.
“The weather has held out for us and I have met people from Sligo, Galway and other parts of the country.”
He also pointed out that an agricultural show on the scale of the Granard show would not be possible without its dedicated sponsors.
“It is because of them that this show continues; and it just keeps on getting better and better with each passing year.”
The new Cathaoirleach of Granard Municipal District, Cllr PJ Reilly also attended the show as did Longford/Westmeath TD, Deputy Robert Troy (FF) and Cllr Micheál Carrigy (FG).
Cllr Reilly pointed to the many elements of the event that continue to strengthen since the show’s inception back in 1950.
“Horses are still a very big part of Granard Agricultural Show and so are cattle,” he said.
“These days you have pedigree cattle and different continental breeds on show and that attracts people from all over the country.
“Also you have Kiernan Milling coming on board with their large number of products; there is a different perspective on farming available at agri shows these days and there is so much more to see and admire.”
He then added; “Show day is still a great day for the town of Granard and it is wonderful to see the show surviving this long; I have no doubt that it will continue long into the future too.”
See photos on pages 34 and 47.