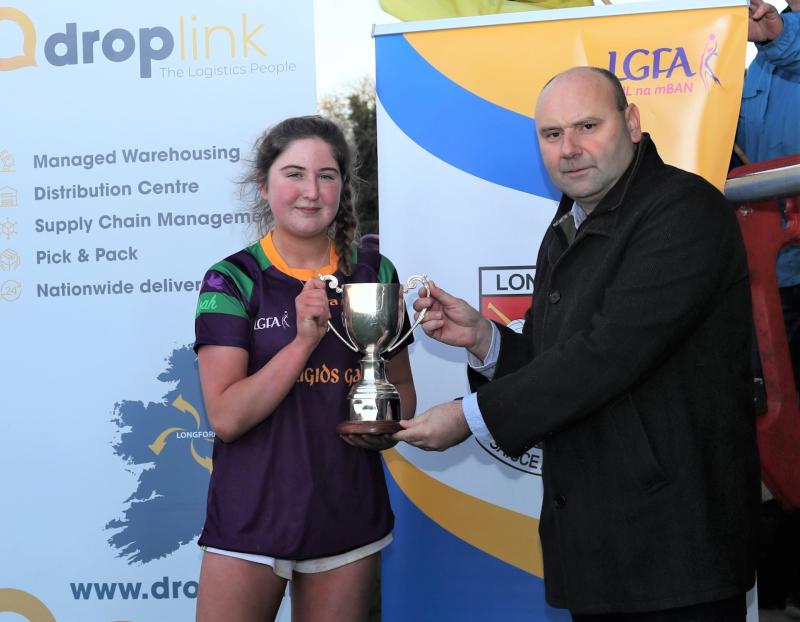 St Brigid’s won the county final in emphatic fashion, with a brilliant first half display giving them a 4-11 to 0-0 lead at half-time.

Clonguish were the better team in the second half and to their credit they kept battling to the end. However, they were faced with an impossible task given the score line at half-time.

A young, hungry Ardagh side simply tore their opponents to shreds in the first half.

All but one of Brigid’s first half scores were from play. They only managed to score a single point in the second half but they had done more than enough already to take the title.

Given that they were a transformed team in the second half, Clonguish will be left frustrated at not showing up in the first half.

With just 9 minutes gone, Ardagh were 1-4 to 0-0 in front and Clonguish were struggling to settle.

Their cause was not helped by losing full-back Bolu Alaba to injury midway through the first half. Her replacement, Grainne Moore, was one of Clonguish’s best performers but it was all one way traffic in the first half.

Ardagh captain Aisling Higgins scored the first of two goals in the 7th minute. With Claragh Shannon and Anna Hayden particularly sharp in the attack, Higgins raised her second green flag in the 27th minute.

A long ball deceived Clonguish goalkeeper Aoife Cooney and Higgins had the simple task of finishing to the net.

More misery was to follow for Clonguish before half-time, with two further Ardagh goals.

They came from Sian Gallagher and Keeva Gillen, who had an excellent game.

Clonguish registered their first score of the game early in the second half, with Eva Gregg firing over a point.

That was followed by two Emma Shannon points (one a free) and at least Clonguish were beginning to restore some respectability.

However, they also registered four wides in this third quarter as they enjoyed a purple patch of possession.

Ardagh recorded their only point of the second half, an Aisling Higgins effort, in the 44th minute.

Emma Shannon got another point back for Clonguish, from a free in the final quarter.

Clonguish squandered a goal opportunity when Aideen Gregg blasted wide of the post.

Clonguish were denied another goal opportunity when a shot from Emma Shannon was well blocked. Ardagh lost Orla Kenny to injury late in the second half, with Kenny having put in a solid hour’s work.

There were scenes of great joy at the final whistle.

Katherine Kilduff at centre-half back put in a strong performance, snuffing out Clonguish attacks.

Keeva Gillen dominated at midfield with her athleticism a major weapon for the winners.

In attack, Anna Hayden and Claragh Shannon scored freely, while Sian Gallagher produced a player of the match display.

Eva Gregg was lively and in attack, Emma Shannon was a constant threat in the second half.

Edel McGann made an impact in their attack when brought on. She faced her sister, Noelle, who was playing in goals for Ardagh, with the game being played in their home pitch in Kenagh.

Ardagh had mother and daughter starters in Noelle and Keeva Gillen, while Anna Hayden’s mother, Cathriona, was among their subs.