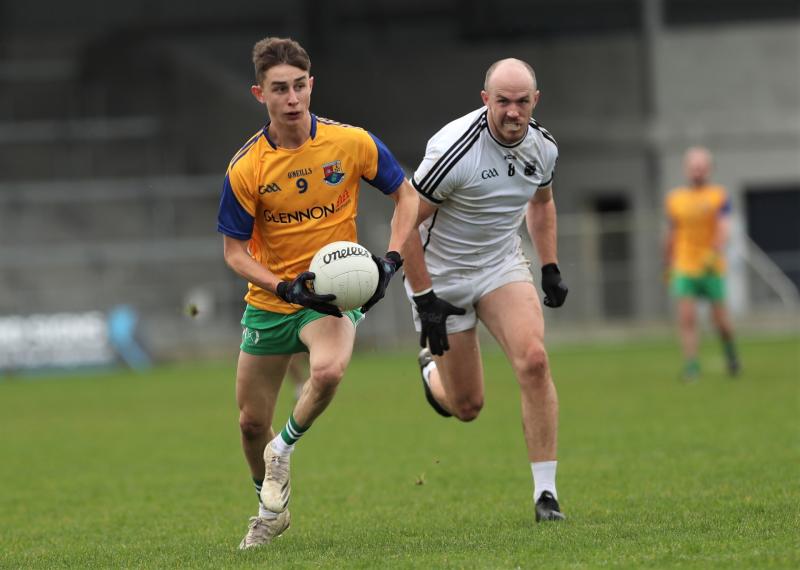 Jack Magan on the ball for Killashee against Clara. Action from the Leinster Club IFC first round game at Glennon Brothers Pearse Park Photo: Syl Healy

A couple of crucial goals from Clara corner-forward Josh Fleming in the closing stages of the first half shattered the underdogs Killashee in the Leinster Club Intermediate Football Championship first round clash at Glennon Brothers Pearse Park on Saturday.

What was always going to be an extremely difficult task against stronger opposition became a mission impossible when St Brigid’s (forced to field without a few regulars) were reduced to 13 players in the first quarter of the game with captain Michael Farrell receiving a straight red card in the opening minute.

The linesmen intervened again to consult with the Meath referee Patrick Coyle after Francie Dolan suffered the same fate when he was sent-off in the 15th minute but remarkably it was the two-in-a-row Longford Intermediate champions who led by 0-3 to 0-2 at the first water break.

But from the moment Fleming flicked the ball to the net for the first Clara goal in the 21st minute, the writing was on the wall for Killashee who conceded another 1-3 in quick succession as the visitors established a commanding 2-5 to 0-3 advantage.

While Clara lost a player when Edward Cullen was branded with a straight red card in first half stoppage time, it mattered little to the eventual outcome and the Offaly Senior ‘B’ champions scored four more goals in the second half to run out very easy winners.