Mullinalaghta, Killashee and Legan are all in provincial championship action this weekend 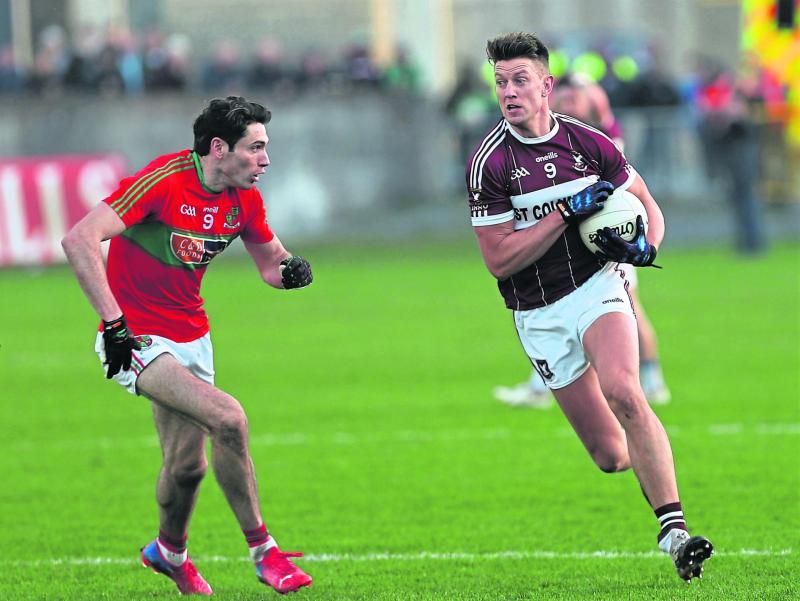 John Keegan on the ball for Mullinalaghta in breaking away from Mostrim opponent Brian Farrell. Action from the 2021 SFC Final Photo: Syl Healy

A hectic weekend is in store for local GAA fans as Longford’s senior, intermediate and junior football champions set out on their respective Leinster club campaigns.

Then on Sunday, at 1pm in Glennon Brothers Pearse Park, Mullinalaghta St Columba’s, the 2018 AIB Leinster club senior champions, will be hoping they can account for Wicklow standard bearers Blessington.

In all three games, there will be a winner on the day.

After their headline grabbing club championship heroics three years ago, Mullinalaghta were probably annoyed with themselves that they failed to feature in the 2019 and 2020 county finals, and their experience, craft and strength was certainly to the fore as they overcame Mostrim by 0-15 to 0-6.

Indeed, throughout the 2021 club championship, Mullinalaghta looked like men on a mission, with a point to prove and they are well equipped to mix it with the best in the province.

Managed by Jonathan Daniels, Blessington required a dramatic late point from full forward Kevin Quinn to get them over the line (0-11 to 0-10) against reigning champions Baltinglass in the Wicklow county final, thereby giving them their first title in 38 years and their third title in all. The winners right half back Kevin Hanlon was awarded the Man of the Match trophy.

Daniels is a highly regarded coach in Wicklow and he previously guided Kilmacanogue to a junior county title and Dunlavin to intermediate success.

Captained by midfielder Patrick O’Connor, Blessington will be keen to make their mark in the provincial series and they’ll be well fired up for the challenge of Mullinalaghta. The McLoughlins - Paul and Anthony, the Bohans - Steven and Brian, Craig Maguire, Mikey O’Connor, Jack Gilligan and Eoin Keogh are among the Blessington names that Mullinalaghta will be familiarising themselves with ahead of Sunday’s encounter.

Backboned by key performers like Patrick Fox, Donal McElligott and Gary Rogers in defence; David McGivney and John Keegan at midfield and upfront, by Cian Mackey, Jayson Matthews, James McGivney and Rian Brady, Mullinalaghta should be well capable of negotiating the Blessington hurdle.

Ray Curley’s Killashee charges appear to be very much up against it but that won’t deter them in the slightest. 2021 is already a year they won’t forget as captain of the back-to-back intermediate champions, Michael Farrell had the honour of accepting the Hennessy Cup twice in a matter of months.

Killashee struggled for long spells in their 2-4 to 0-5 county final win over Ballymahon. They trailed 0-0 to 0-3 at half-time but second half goals from Dylan Farrell and man of the match Johnny Casey swung the tie in their favour.

From 1956 up until last year, Clara plied their trade in the Offaly senior ranks before suffering relegation to senior ‘B’ and they ensured their spell in the second tier championship was a short one as they overcame neighbours Tubber (who included Ciaran McManus in their ranks) by 1-13 to 0-9 in the 2021 senior ‘B’ final.

For a club with six Offaly senior football Championship titles – 1960, 1964, 1991, 1993, 2003 and 2009 - it was a major blow to Clara, home town of Ryder Cup golfer Shane Lowry, to suffer relegation. They are managed by Mark Scanlon, a forward on the ‘93 SFC winning side and they racked up some very facile wins en-route to winning this year’s senior ‘B’ crown in the ‘Faithful County’.

Colm Doyle is captain of a Clara side that also contains exciting youngsters like three All-Ireland U20 medal winners Ed Cullen, Cormac Delaney and Adam Kelly.

Other names on the Clara team sheet that Longford folk will be familiar with are Scott Brady, Thomas Deehan, Ross Brady and Graham Guilfoyle, players with inter-county experience under their belts.

Legan Sarsfields, managed by Westmeath native David Martin, claimed their sixth Longford junior title with a 1-15 to 0-13 final win over Ballymore. Barry Tierney was man of the match grabbing 1-3, and Legan will be looking to Barry, Gary Keena and Chris Yorke to land the vital scores against Clonbullogue.

Legan, captained by Noel O’Neill, make the trip to Gracefield on Saturday where their opponents are the first-time Offaly intermediate champions, Clonbullogue. The Clonbullogue men crushed Raheen by 3-15 to 2-8 in the county final and one of their stars was U20 All-Ireland medal winner Keith O’Neill, who scored 1-4.

Others to shine in the scoring stakes were  Jamie Guing and Shane O'Brien.  O’Neill, Guing and O’Brien amassed 3-12 between them so it doesn’t take a genius to work out that these players will have to be stopped if Legan are to progress.

Clonbullogue, captained by Eddie Bennett, possess a formidable midfield duo in the guise of Jack McEvoy and Peter Bennett, and Legan look like they have it all to do  at the venue where Clonbullogue also won their Offaly intermediate final.