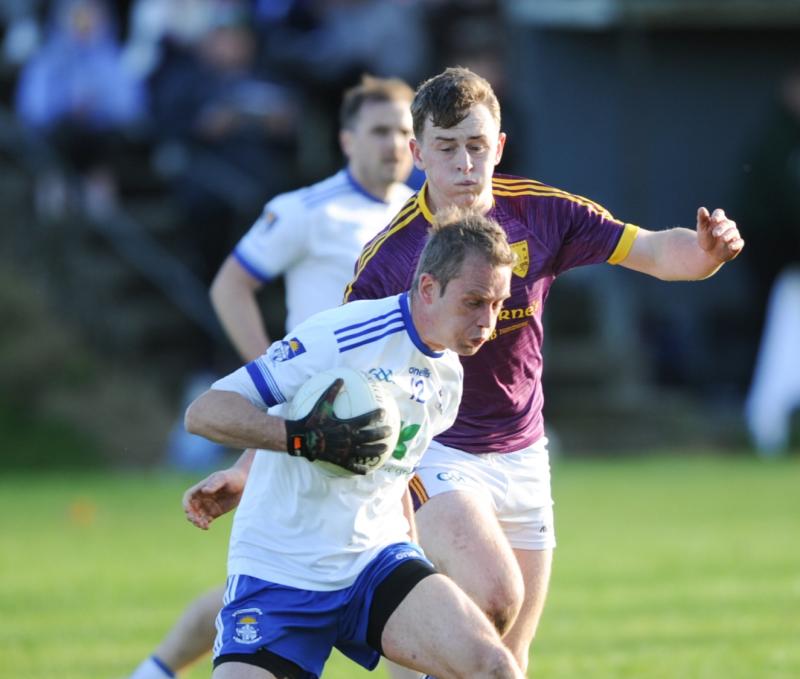 In a repeat of the 1990 Junior Football championship final, which Legan won by 8 points, the Sarsfields and Ballymore will battle it out again 31 years later in what promises to be a tight game at Glennon Brothers Pearse Park this Sunday, throw-in 12.45pm.

Legan will aim to become the joint most successful team in the junior championship by winning the title for the 6th time. They last won the title in 2012 and the current team still features many players who lined out in that win over Moydow Harpers.

Captain on that day was Shane Cox and he is now the chairman of the club and still lining out at midfield alongside Conor Quaine who picked up junior player of the year award in that all-conquering team of 2012.

Barry Tierney collected the man of the match award  in the 2012 final and he will line out in the same position 9 years later as a corner-forward.

Conor Moran, Joe Keogh, Noel O’Neill and John Slowey also played big parts that day and will return to the starting team this weekend and their experience will be crucial.

The south Longford side have also blooded new talents including James Whyte, Jack Gryzwacz, Dylan Boylan and Adam Doherty in mixing the old with the new.

Impressive wing back Blaine Murphy would still be a minor only for the change in the age grades and he will look to attack with his blistering pace on every opportunity along with Doherty.

Interestingly, Blaine could be joined on the field this Saturday by his father Kieran who featured off the bench in their semi-final success over Grattans.

Legan Sarsfields impressed in that 3 point victory to continue their unbeaten run in the championship. It has been a tough year for the parish and the players were met with jubilant scenes after an emotional victory in the penultimate game against Grattans.

The parish tragically lost a key player and friend earlier in the year and Stephen Doherty will undoubtedly be remembered as they prepare for the county final.

Legan are well managed by David Martin of Maryland in Westmeath who is ably assisted by his first cousin Kieran Martin, the current Westmeath footballer.

Much of the Legan hope will be placed on two transferred players who have joined the club in recent seasons. Chris Yorke from the Meath Hill club and Gary Keena from Ballynacarrigy will play at centre-half-forward and full-forward respectively.

Yorke and Keena have done the bulk of their scoring so far in the championship and are both very efficient from placed balls. The performance of those two down the middle of the attack alongside Tierney and the strength of Cox and Quaine at centrefield will be crucial if Legan are to emerge victorious.

Ballymore are aiming for their third junior championship success after claiming the title in 1980 and 1995. They comprehensively defeated the Rathcline second string in the semi-final to reach the 2021 decider in their first year back in the junior grade since 1995. Their only competitive game in the group stage came in a 4 point victory over Grattans.

Former Longford star Bernard McElvaney didn’t start in their semi-final victory but he was a first half substitute and he will be vital in their quest for championship glory. McElvaney is a real powerhouse and his leadership, coupled with the talented young attacking players, will make them hard to stop.

Gavin O’Hara, the Reillys and the Gormans all figured prominently on the scoresheet as Ballymore cruised into the final and their pace adds a serious dimension to their attack while team captain, playmaker Damien Monaghan, remains the link player for his side at centre-half-forward.

Donal McElvaney continues to be a stalwart at centre-half-back while also solid for the Brady bunch are the experienced Ciaran Fahy, Pete McNerney and Pauric Kavanagh.

Much like their final opponents, Ballymore mix the young with the old and joining Fahy and McElvaney in defence is Phillip Dawson, Cian O’Hara and the Creegan brothers.

Towering half forward Ciaran Reilly has featured on many Longford underage teams and he scored 2-2 in the landslide win over Rathcline in the semi-final. Reilly can make a big impact in the bid to bring glory back to Ballymore for the first time since their Intermediate championship winning team in 2004.

Both clubs have recently done a lot of work in the further development of their grounds and are real heartbeats of their communities.

The two solely junior clubs are doing great work to stay alive and the buzz for this final has been immense. A draw is possible but Ballymore, just down from the Intermediate grade, look the stronger side and are given a hesitant vote to come out on top.