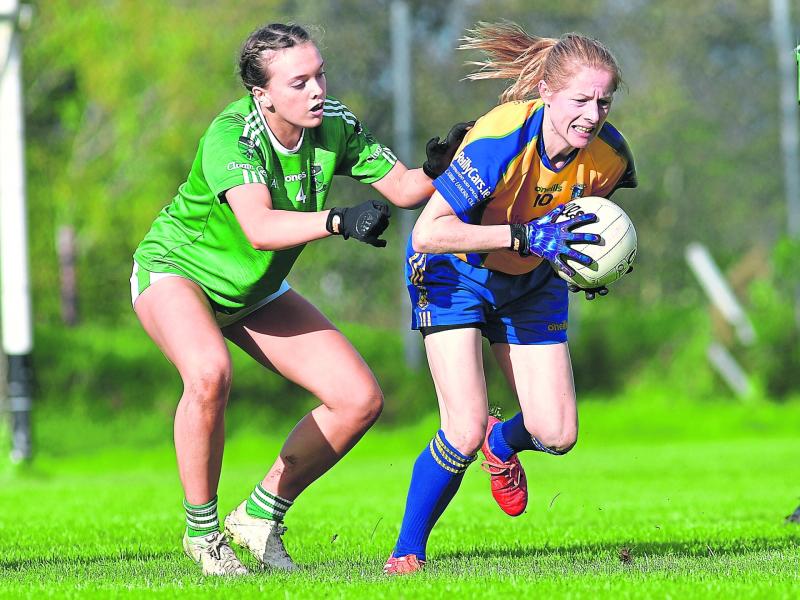 Carrickedmond had to go to the well a number of times to see off Clonguish but their greater experience was probably the decisive factor.

Sarah Shannon was in electric form for the winners and she was well assisted by hard working colleagues.

Shannon is a rare talent and aside from scoring two points, she was a constant thorn in the side for Clonguish.

Clonguish will be disappointed to fall short. They are a young, talented side, but at times they struggled with the intensity that their more seasoned opponents brought to the table.

However, with young talents such as Ciara Sutton, Lynn Gregg and Kamille Burke, they have something to build on.

The sides were locked together at half-time, at 1-4 apiece. When the intensity ratcheted up in the second period, Carrickedmond had more leaders, with Michelle Noonan, the vastly experienced Michelle Mulvey and substitute Sinead Farrell playing their part.

Clonguish have an exciting full-forward line but they needed to score more from play.

Lauren McGuire opened the scoring for Carrickedmond with a pointed free in the 3rd minute. Clonguish replied with a Kamille Burke goal a minute later, which was set up by Aisling Greene.

Lauren McGuire was asking serious questions of the Clonguish defence and in the 6th minute, an incisive run along the endline resulted in a point for her.Carrickedmond’s early attacks revolved around McGuire, but Claire Greene started to come more into the game and she sent a free over the bar in the 10th minute.

Clonguish corner-forward Ciara Healy came into the game, with a point from play followed by a pointed free, leaving it 1-2 to 0-3 in favour of Clonguish after 16 minutes.

Lynn Gregg kicked a great point in the 18th minute and Clonguish were growing in confidence, leading now by 1-4 to 0-3.

However, the wind was taken out of their sails when Carrickedmond’s Rachel O’Farrell found the net for a crucial goal in the 20th minute, following a pass from Caoimhe McCormack.

With former Dublin player Gemma Fay pulling the strings at midfield, Carrickedmond levelled matters with a pointed free from Claire Greene in the 26th minute.

The same player notched the first score of the second half, this time from play, in the 38th minute.

Carrickedmond had raised their game and were in control in the middle third. But Clonguish levelled the game with a pointed free from Ciara Healy in the 44th minute.

A long range point from Aisling Greene in the 49th minute left the minimum between the sides.

Rachel O’Farrell pointed from play a minute later. Exchanges were physical and Carrickedmond had the edge in this regard.

Clonguish again narrowed the gap to a point when their main point of attack Aisling Greene was fouled in the 54th minute. Greene herself sent the free over.

Greene is a skilful player, who undoubtedly will be frustrated with a return of just one point from play in this game.

Sarah Shannon, who was immense in the second half, fired over a point in the 56th minute to make it 1-9 to 1-7 and that is how it finished.

This is truly a new age in the Ladies Senior Championship. Of the semi-finalists, Clonguish were the only ones who had been a dominant force in the 2000’s or into the following decade.

Carrickedmond and Slashers have both emerged as serious outfits in recent years. Mostrim have made progress.

The 2021 final at Glennon Brothers Pearse Park this Saturday will be very interesting, throw-in 2.30pm.